There is a photo hanging in my home of a juicy looking orange hanging from a tree; the fruit is pierced by a large screw, a brutal metaphor for the reality that is Gaza and one of many powerful photos and paintings by Mohammed Musallam, a 41 year old artist born in Gaza. 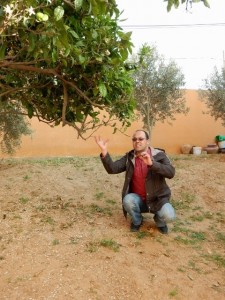 We are driving north, past Jabalia to his home in Beit Lahiya, 15 kilometers from Israel. He and his brothers have rented an apartment distant from the border where the family flees in times of war; last year there were 50 people crammed into the one apartment.  We turn down a dirt road, his home faces a large empty lot, homes destroyed in the 2012 war.  In 2014 his next door neighbor was bombed and killed, another lost his legs. In 2008 IDF came into Mohammed’s house for 10 days, destroying things, cutting up his paintings; he shows us a canvas that still has the foot print of an Israeli boot, “the most moral army in the world.” You must understand how dangerous art can really be.

We enter the high walled gate into a Garden of Eden filled with irony and political satire, a meat grinder is part of a planter with a row of cactus and succulents, a mishmash of found objects, mostly dolls and children’s toys creates a collage that is at once a tribute to childhood and to its destruction.  The air is filled with the perfume of jasmine, grapes and figs are growing magically in the midst of desolation, and a collection of lively chickens cluck in a large coop.  Mohammed is both passionate and impish, outraged at the world around him, filled with social and political commentary.  He has made a candle holder out of a teargas canister, a chandelier where the bulbs are replaced by candles.  In 2008 the Israelis cut all the electrical cables and things have been pretty dicey since, the local electrical station was bombed in 2014. He has electricity three to six hours per day and has gone for 30 days without electricity.  All the food in the refrigerator rotted, needless to say. He could use a generator but fuel is too expensive. He photographed a toilet, the toilet paper is made of a roll of Palestinian passports, the passport covers are used as armrests on a chair, birds’ nests nestle in bullet holes.

His children range in age from three to twelve, the five year old insists on sleeping with her parents and the kids have had issues with bedwetting, a classic PTSD symptom. He remarks, “War is terrible when you have children.” He studied in Nablus and Cairo and is three months from his PhD, but unable to get the critical permit to Egypt. He paints and teaches fine arts at Al Aqsa University. He struggles to get permits to do exhibits in Europe. 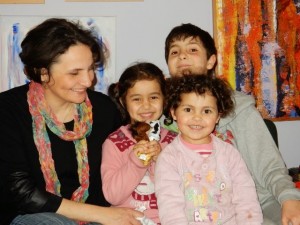 Mohammed’s mother lives on the second floor, his family on the third, and he has a studio on the ground floor where we sit. His wife has an Algerian passport but chooses to stay.  “It has become normal.  I find beauty, happiness, family, there is no choice, this is not courage.” We nibble a sweet fruit combo and enjoy his lively children, the youngest has a devilish personality and keeps her parents busy. As we explore the wild jumble of found objects and striking paintings, Mohammed says, “We are normal, we are people… we are a small country, we have to live together, there is no choice.  He has a gallows sense of humor: “six hours of gas, six hours of electricity, 60% of our salaries, six days every two months the border is open.”  Six is their lucky number. He worries, “Israel feeds hate, creating militants.  I am an artist.  I don’t want to fight.” He finds in his art both the intense paradoxes and the beauty around him. It is a terrible shame that he has to struggle to share his talent, his humor, and his passion with a world that desperately needs more men like Mohammed.