Here are the facts. I will leave you to feel the outrage and hopefully be moved to action.

The No Way to Treat a Child conference on 9/17 sponsored by Kairos Puget Sound Coalition included 70 people who heard a powerful report from Brad Parker from the Defense of Children International (Palestine) who reviewed the lack of basic human rights protections for Palestinian children arrested, detained, and tried by the Israeli military. Jennifer Bing of American Friends Service Committee then discussed the destructive impact of military detention of children on the lives of families and communities and showed a damning film “Detaining Dreams” in which four Palestinian boys share their appalling experiences of arrest, torture, and detention. I then joined a panel which included Brad, as well as Palestinian-American social worker Amal Muammar and international lawyer John McKay. 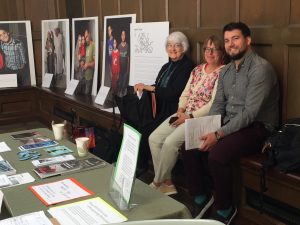 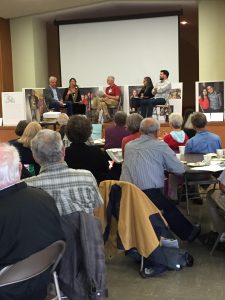 The afternoon ended with a call to action:

1. meet with congress people and demand an end to separate rules for Israeli Jewish and Palestinian children in the occupied territories
2. show the film “Detaining Dreams”
3. go on a delegation to Palestine
4. seek the support of your faith communities
5. get and stay educated (www.nowaytotreatachild.org)

500-700 Palestinian children are prosecuted in the Israeli military court system every year, ¾ experience physical violence, and psychological torture is systemic and institutionalized. They are interrogated without a lawyer or family members present.
The number of child detainees is skyrocketing, in February there were 440 children in Israeli prisons, highest number ever revealed.

Israel has renewed administrative detention against children whereby a child can be detained indefinitely without charge or trial. Children are also placed in solitary confinement. 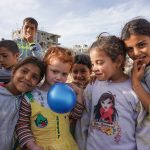 Children less than 18 represent 48% of the 4.68 million Palestinians under occupation. Although the age for treatment as an adult has gone from 16 to 18, this has not impacted sentencing. Stone throwing can be punished with up to 20 years of imprisonment. After release, children frequently show signs of PTSD such as bedwetting, attention disorders, cognitive and psychological deficits that lead to an inability to complete their schooling.

In the West Bank, Israeli settler children who are accused of a crime are treated under civil and criminal laws and afforded rights guaranteed by a host of international laws while Palestinian children who live in the same territory are under military law with no respect for their human rights and the protections that should be afforded to all children. They are frequently arrested in the middle of the night in a terrifying night raid that shatters the entire family, blindfolded and cuffed and taken to detention centers in settlements, threatened and coerced into false confessions or collaboration with the military, and jailed in Israel which is a violation of the Geneva Conventions. The family is at risk for home demolition. This would never happen to a Jewish child or a Jewish family.

The US State Department already documents these human rights offenses in an annual report, but that is not enough. The US government must take concrete steps to hold Israeli authorities accountable and to change their behavior toward children.