Today is the funeral for Qusay Hasna al-Umour, killed yesterday just outside of Bethlehem.  I keep hearing comments like, “This is our life,” “What can a stone do to a jeep?” My cousin was killed like this two years ago.” The rage, agitation, and despair are brewing just below the surface of what is now normal in Palestine. 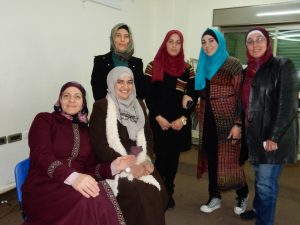 Today I am meeting with a group of women at Al Rowwad for a health education session and general discussion. We set up two tables end to end, the juice and wafers are distributed, and seventeen women from the camp arrive, chatting, quiet, or giggling nervously, and a couple of children who are encouraged to leave. Staff from Al Rowwad and a friend from Ramallah provide translation and we set the tone: a confidential open conversation about women’s health issues.  Periodically a tour comes through or a photographer stops by and we all go quiet, waiting for the intruders to leave. Slowly the discussion grows as the women become more comfortable, the married women much more willing to talk than the unmarried women. I learn that reproductive health and sexuality only seem to begin for many at the time of marriage and they are often ill prepared for what lies ahead.  Their mothers are their chief sources of information and much of it sounds more folkloric than fact based, with due respect for the rich tradition of herbal treatments and women helping women. Soon we are deep into the topics of menstrual cramps, infertility, Clomid treatments and IVF, cupping therapy for back pain, premenstrual syndrome, menopause, postoperative cesarean section pain, and using contraceptive pills to delay menses during Ramadan. (If a woman has her period, she cannot fast, and must make up the time later, so many try to delay their period with hormones.) There seems to be less concern here if a virginal woman is taking pills for a medical reason.  This is new.

There is a burst of interest when one woman asks how to deal with facial hair which seems quite prevalent in this crowd, everyone starts talking at once.  So I begin with basic genetics and standards of beauty in this culture, (ie. no hair). I review hormonal disorders, various treatments and the use of electrolysis and laser.  No one can afford those treatments and waxing seems popular.  It seems to me the underlying problem is a lack of acceptance and love of their faces as they are, a desire to look like the airbrushed models that they see on TV soap operas and female newscasters. This is a universal female dilemma and soon someone comments that it is actually a problem with the men who want women to look a particular way and make them feel ashamed when they appear as they are.  Another universal dilemma. There is an enthusiastic response to this comment and lots of talk, women educating and empowering each other.

Soon a young woman asks, with obvious laughter and embarrassment, what exercises can she do to do to prevent breasts from sagging after nursing. The crowd gets pretty raucous. I explain basic anatomy (the breast is a gland not a muscle), and one woman loudly suggests wearing an uplifting bra which provokes lots of laughter and chatter. Again the conversation quickly shifts to the male partner, “This conversation should be for the men!” and the expectations that are placed on women and their bodies: to be the alluring sexual partner, have many children without any consequences, and always look sixteen.

A member of the Al Rowwad staff wants the women to focus on their own empowerment and the education of their daughters and sons. One woman asks about pain with intercourse and I can see several younger women listening intently as I openly discuss sexual issues, vaginitis, and pelvic pain. The staff member questions: “What do we say to our daughters? Even about periods?” She suggests that there is an individual and collective responsibility to educate the children about these intimate matters. “Mothers neglect their daughters, don’t talk about this. Old Islamic literature and folklore deals with these issues. It is not an issue of lack of information.” She explains that in this culture, young women may experience harassment and even rape and that is their first exposure to sexual experiences and then they are not allowed to discuss their trauma.  They take that trauma to their wedding night. Some of the younger (virginal) women say that intercourse sounds disgusting and they don’t want to talk about it. I privately wonder how many of these women are afraid or have experienced some trauma, or if the assumption of heterosexuality does not work for everyone, but exploring such issues would require a lot of work and trust. The staff person urges the women to talk to their sons and daughters about safe and traumatic touch, to raise awareness amongst their sons not to assault women and in fact to protect them. We discuss some recent studies about rape and molestation amongst family members and one woman urges the group to be vigilant with how the father plays with his daughters. 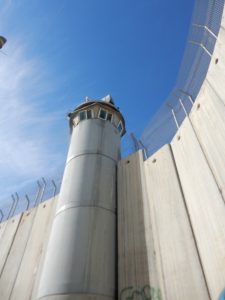 I am honored and amazed that the women are willing to delve into such challenging topics and to trust each other with this conversation.  Consciousness raising 101.  I am told that ten women sent their apologies.  They were unable to come because, as families of martyrs, they needed to attend the funeral of Qusay Hasna al-Umour who was killed yesterday. As often happens in distressed societies, women’s concerns always come second. The facts of occupation make women’s liberation even more challenging than just facing a conservative culture largely dominated by men and their unreasonable expectations.