Writing as therapy. Shabak, if you planted a bug in my computer, listen up! But I am jumping ahead of myself.

Yesterday afternoon was lost in the ritual of endless slowpoke uploading of photos and blogs and notes and the cleansing as best I could of any evidence of the past two and a half weeks. I am returning to my nice Jewish grandmother with the nice Star of David identity, with the added nice husband with a nice Jewish name and a crinkly white beard.  We should pass but this is a challenge given the level of rage and despair that has kept me up much of the night.

This morning we set off for Ben Gurion airport over three hours before our flight. The first brush with a security officer, leads to her calling the next level up.  He is a tall, thin, brusque young man who is unhappy that I have done volunteer work in Gaza. Never lie. “Why Gaza? There are poor people in Africa.” (I have heard that line before.) “Why not?” I reply. “Did you wear the Mogen Dovid in Gaza?” Yes, I was openly Jewish in Gaza.  That lost me some credibility.  “Do you work with groups? What groups?” Is he really expecting me to say Hamas? How about: the Gaza Community Mental Health Program that provides psychotherapy for all the young people you have bombed and maimed? Take a deep breath. Then there are the: are you Jewish enough questions: “What organizations do you belong to, what holidays do you celebrate, what special foods do you eat on Yom Kippur?” I knew that was a trick question because you are supposed to fast on Yom Kippur. I mean, really? He keeps coming back to the question of why Gaza.  I talk about health care and helping women and making peace.  He is not happy.

Turkish Airlines welcomes us and we trek three floors up and fall into the alternative universe of more airport security, Israeli style. The bags are opened, all electronics and devices removed and the people are x-rayed. But because this is Israel, the bags are then laid out on tables and every zipper and pocket is opened, the underwear and plastic bags of medications and embroidered pillows are fondled and swept for explosive material repeatedly. Medication caps are unscrewed, cameras turned on. A small jar of Vasoline and two tubes of prescription medication for arthritis are removed.  I demand to talk with the supervisor and he assures me, “It is forbidden.” End of discussion. My blowup lumbar support pillow seems particularly problematic.  My computer is taken to another area “for more x-rays.” Why do I doubt that explanation?

The process is excruciatingly slow, the staff dawdle, consult, re-swab, there is no sense of urgency or privacy.  We are captives in this tiny hole of paranoia and control. A kind of bureaucratic torture or at least a bureaucracy that wants us to know who has the power.  For unclear reasons (no explanations are offered for anything), they confiscate my husband’s new backpack and give him some cheap plastic bag to stuff his belongings in. “We do not explain our procedures.  It is for security.” It is not a home demolition, but it is collective punishment nonetheless. He seems to have terrible luggage karma, but he is traveling with me and I am obviously trouble.  The security agents claim that this innocent bag will go out on the next flight and show up in lost luggage in Boston.  Insha’allah.

At passport control I discover I have a biometric passport with a computer chip (who knew?) so if I smile just like my passport photo they will let me out.  I do. 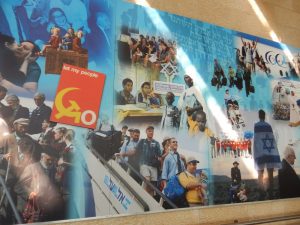 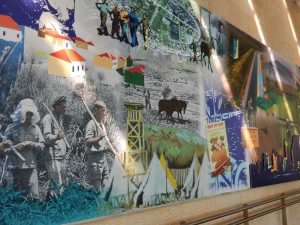 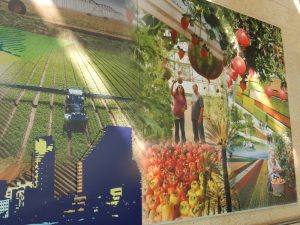 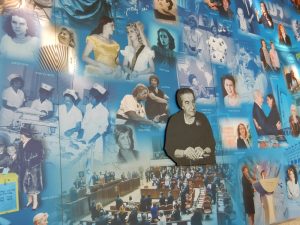 As a student of the Israeli messaging industry I am always intrigued by the final exhibit on the walls leading into the duty free shopping area.  This year it is a gift from the heavens: inspirational murals and statements celebrating “120 years of Zionism.” The history lesson headers include: 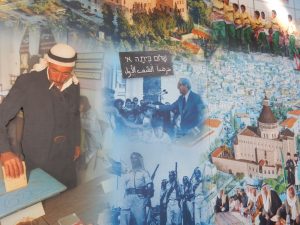 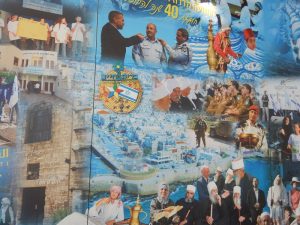 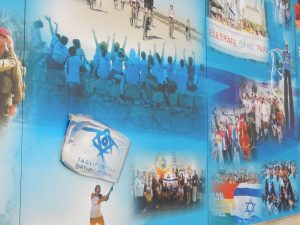 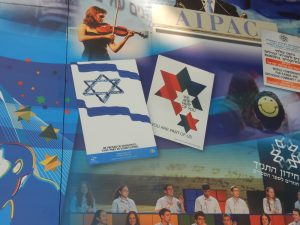 THE “STATE IN THE MAKING”

A PEOPLE RETURNS TO ITS LAND

THE REVIVAL OF THE HEBREW LANGUAGE AND CULTURE

ISRAEL AND THE DIASPORA

ZIONISM IS AN INFINITE IDEAL.

Nicely laid out, very thorough and consistent, truly inspirational, the graphics are fabulous, evocative, multi-cultural. They really know how to sell a product. 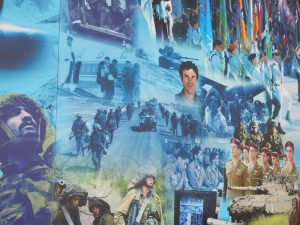 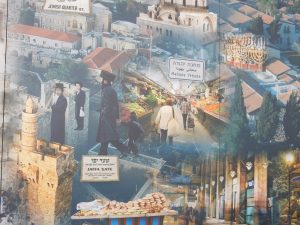 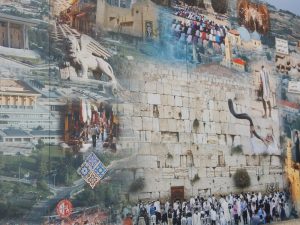 That final quote is from Herzl. 1904, “For Zionism…encompasses not only the hope of a legally secured homeland for our people…but also the aspiration to reach moral and spiritual perfection.” This is a problem. 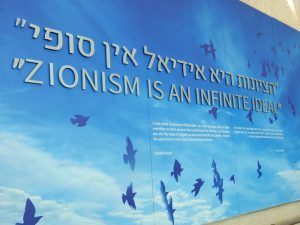 I am just going to give you a taste of the panel titled MINORITIES:

The Zionist movement sought to establish a model society in the Jewish State, where non-Jews as well as Jews would enjoy complete equal rights.

THE LAW OF CITIZENSHIP

The Law of Citizenship (1952) granted full citizenship to all residents of Israel. All minorities enjoy complete freedom of religion and worship, and are free to participate fully in the countries society, economy, culture, politics, and legal system. Arabic is recognized as an official language of the country.

There is much written about a tolerant, progressive culture, a Jewish and democratic state, a just society, the two thousand years of yearning for Zion. I cannot find the “P” word (Palestinian) anywhere, and needless to say, there is no colonialism, no Nakba, no dispossession of 750,000 indigenous people and destruction of over 500 villages, no ghettoizing the Palestinian citizens with fences and checkpoints until 1965, no stealing of Jewish Yemini babies for adoption.  And of course, no occupation of the West Bank and East Jerusalem and no siege of Gaza and no right wing fundamentalist Jewish settlers living like megalomaniacal fascists in the ancient city of Hebron.  Dear lovers of Israel, this is a real problem for me. How can we imagine the future if we cannot agree on the past?

I pick up a copy of The Jerusalem Post, it is the only paper in English. The big headline is: “Donald Trump to become 45th US President today,” (as if I can forget – my plan was not to be in actual physical touch with planet earth during the inauguration), with the sub-header that the US embassy is moving to Jerusalem soon. Palestinians (and anyone with a vague understanding of the complexities of history) are protesting. Jewish groups are marching on Washington fearing an attack on civil liberties.  Bedouins allege that Yacoub Abu Al-Kaeean, the teacher who was shot by police (documented on video) and then lost control of his car and killed Erez Levi, a police officer, is being framed.  Israeli spokespeople are calling him a terrorist possibly related to ISIS. They demolished his house and ten others as part of a plan to build a Jewish village on the site of Umm al-Hiran. A Jewish democracy? Equal rights?

A great wave of sadness sweeps over me. I weep for my people and I weep for the people we are destroying one by one, son by son, house by house. And I fear for my country which is about to plunge into an even more dangerous direction than usual and cause even more havoc in this fragile, contested, precious, and battered place.

Share this to:
previousA war against Arab citizens – January 19, 2017
nextA Hint of Trouble: How “Pro-Israeli” Organizations Work to Suppress Freedom of Speech – March 27, 2017