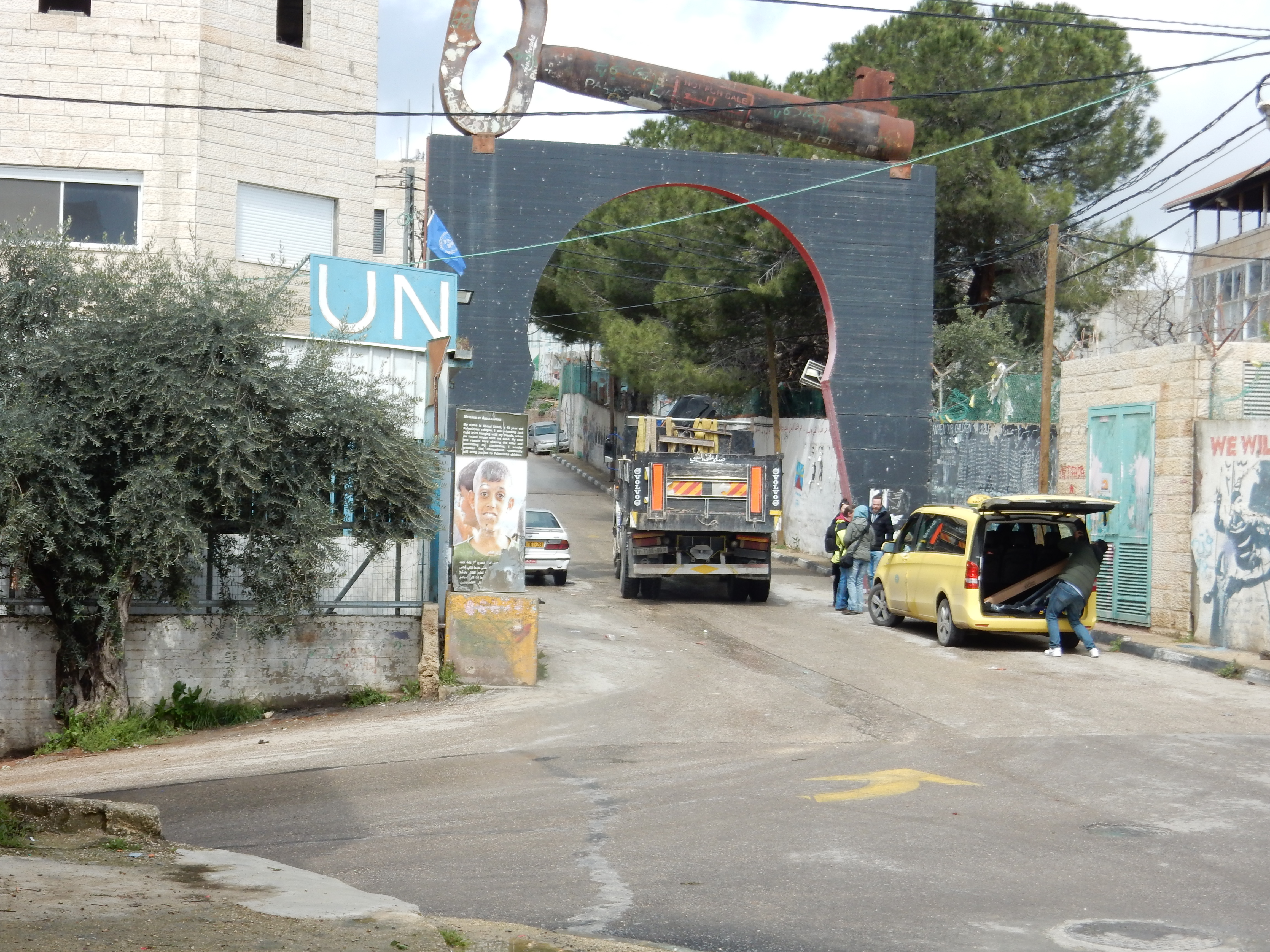 Entrance to Aida Refugee Camp, Bethlehem, with key symbolizing the right of return. photo by A. Rothchild

In late March and early April 2019 I traveled to Jordan and the West Bank (Palestine) with two colleagues, Sonia Dettman and S. Komarovsky, first to attend the Lancet Palestine Health Alliance conference in Amman and then to explore and better understand the lives of refugees and the workings of UNRWA, with a focus on the status of refugee health.

“Here We Will Stay,” a poem by Tawfiq Zayyad

In Lidda, in Ramle, in the Galilee

And in your Throat

And in your eyes

Dr. Abdelfattah Abusrour has devoted his life in the Aida refugee camp in Bethlehem to creating what he calls “beautiful resistance,” developing theater, dance, photography, playing, and other activities to build cultural expression and resistance for children, youth, and women. We are sitting in his cluttered office, the walls covered with inspiring poetry, and pictures of the Palestinian poet Mahmoud Darwish, Pope Benedict (who visited the camp), and Pope Francis, Malcolm X, Martin Luther King, Mahatma Gandhi, Nelson Mandela and Albert Einstein.

Abdelfattah established the Alrowwad Cultural and Arts Society 21 years ago and despite enormous and repeated financial crises, it has grown into a vigorous and inspiring program that is now housed in an old and a new building. The staircase is lined by the portraits of important cultural figures: Fadwa Toqan, Edward Said, May Ziadah. There is a brightly painted, welcoming children’s library and computer center, and a meeting area and to-be-developed museum of Palestinian artifacts upstairs on the third floor. 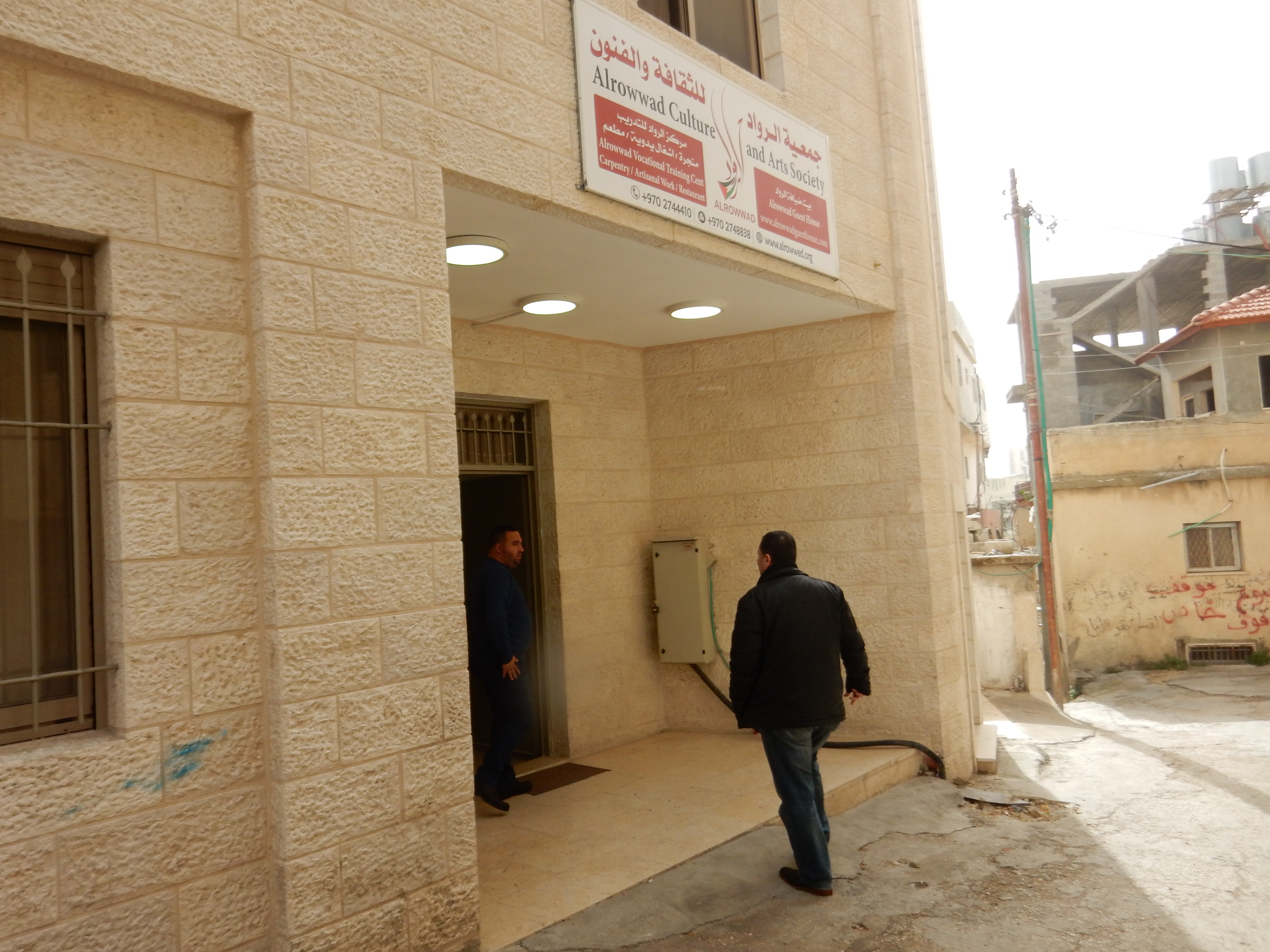 Abdelfattah has faced political challenges for himself as well. In 2014 he made a welcoming statement to Pope Francis who stopped to pray at the separation/apartheid wall. Later in the afternoon, when Abdelfattah attempted to return home to Jerusalem (his wife and children have Jerusalem IDs), he was told he was forbidden without explanation. When he asked why, the soldiers replied, “You know why.” After a long legal battle he found that the charges were (something like) having undue influence on the people, making a statement against the state, and organizing an illegal activity. Two years later, the Israelis dropped their case and classified the file, but he suspects that they were unhappy that the pope had stopped to pray, exposing the oppressive concrete barrier for all the world to see. 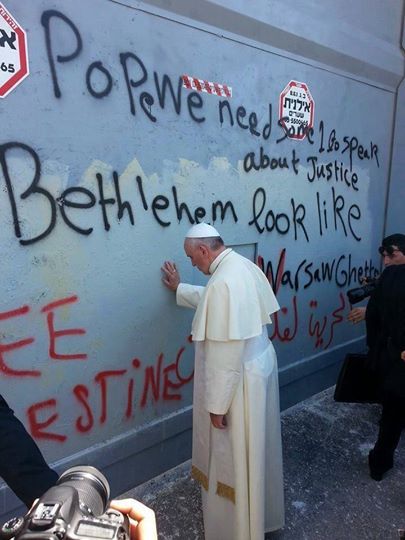 We walk down the muddy street, passing the falafel and shawarma restaurant. Abdelfattah takes us on a tour of the new partially completed building. Women’s handicrafts and a recipe book, (Bethlehem: Beautiful Resistance Recipes, also available on Amazon), are displayed in the lobby and there is an office for Project Cuba. Dr. Mohammed Abusrour (trained in Cuba) mostly does home visits and works at Caritas Children’s Hospital, but he has an office here as well. Downstairs there is a large wood-working and laser carving machine where the furniture and finished cabinetry for the center are being built, as well as art projects and signs created with the laser machine. The rooms lead into a cave which was once behind Abdelfattah’s parents’ house. Here is where the family hid in 1967 and 1973 and some day it will be a museum and performance space. He talks of creating possibilities as well as jobs for the camp.

Upstairs there is a functional educational kitchen which will also be a restaurant, a 14-room guest house that now houses 35-40 beds, each room named after a Palestinian cultural icon. Still to be realized, Abdelfattah shows us the large empty room that will be the educational media program that will host opportunities in film production, written, audio, and visual journalism. We are impressed that there is an elevator, but with unreliable electricity it is not yet safe to use.

We climb the stairs to the roof, which will also be a performance space and have solar panels, and take in the sweeping views of the camp, grey concrete buildings crowded together and topped with black and white water tanks, loose wires, tangles of metal, metal saucers for TV reception, laundry hanging off porches, greenhouses and raised rooftop beds, a thin white minaret, all crowding up against the eight meter high concrete separation/apartheid wall that snakes around and through the camp. Just beyond that are the red roofs of the Jewish settlement of Gilo. The progress in the new building is impressive but much needs to be built, all dependent on raising adequate funds. The dream is that this building will employ 45 people and be self-supporting financially, insha’allah. 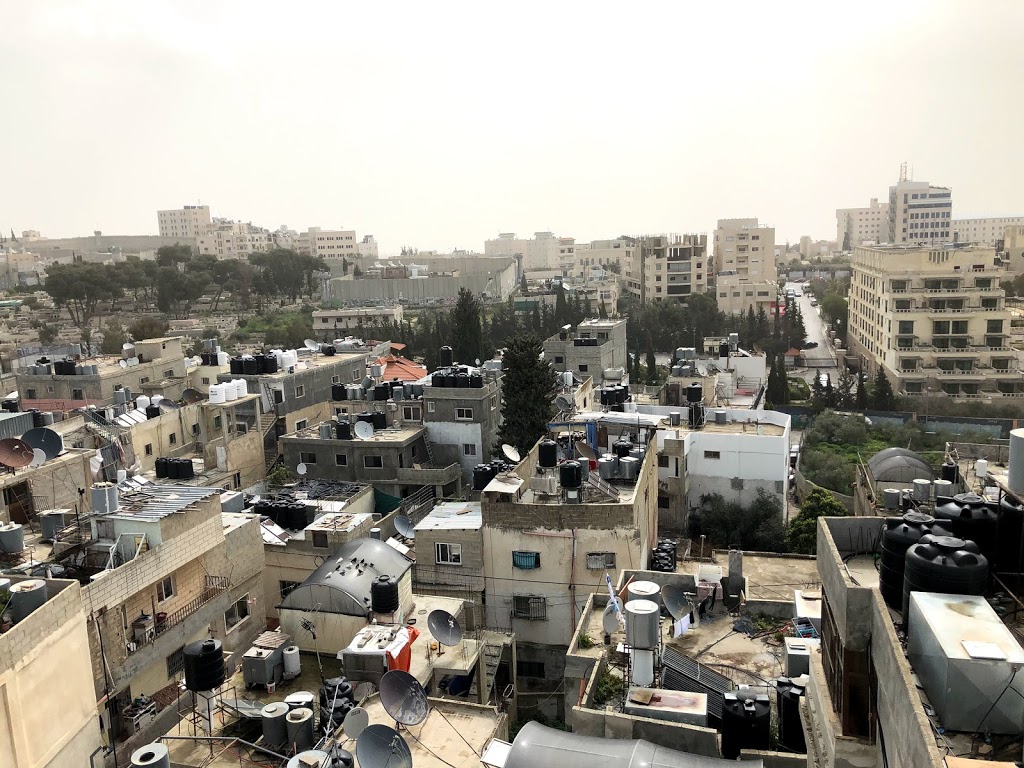 Aida refugee camp from the rooftop of Alrowwad. Separation wall is visible in background. Photo by S Komarovsky

Abdelfattah talks about Alrowwad as a mission-oriented program that creates activities in response to the needs of the community. He says that every form of resistance is legitimate, but he considers giving children and young people every possibility to live rather than to die for the country. He feels that it is essential to inspire hope and promote life and create change that they can be proud of, rather than to dictate a code of behavior related to a political party or thinking that the only way to resist is through armed struggle. He is trying to coordinate his programs with others in the camp, but there are lots of conflicts in philosophy and priorities, as well as the egos and funding of each group. This obvious leads to much repetition in programs, an issue that we see is repeated all over the West Bank and Gaza.

Ten women from Aida Camp join me and Sonia Dettman, a social worker, for a women’s empowerment and education session in the big open activities room in the old building of Alrowwad, surrounded by a row of sewing machines used in the women’s embroidery group. Most of the women are older, though I find it very difficult to estimate a woman’s age in the occupied territories as women age quickly with the political and life-stressors and large number of pregnancies. Once again our relatively brief comments and explanations produce lengthy, loud discussions, laughter, teasing, and sisterly interactions. We cover some of the obstetrical and gynecological concerns that women deal with everywhere, from birth control pills, breast feeding, premenstrual syndrome, to weight gain after menopause, hot flashes, and hormone replacement. I learn that olive oil is good for sore nipples (confirming my belief that olive oil is probably good for almost everything). Women are often afraid to speak honestly of their inner secrets because of fear of gossip within the enmeshed and usually interrelated camp families. Also if you can’t keep your own secrets, I am told, how can you be trusted with each other’s secrets? 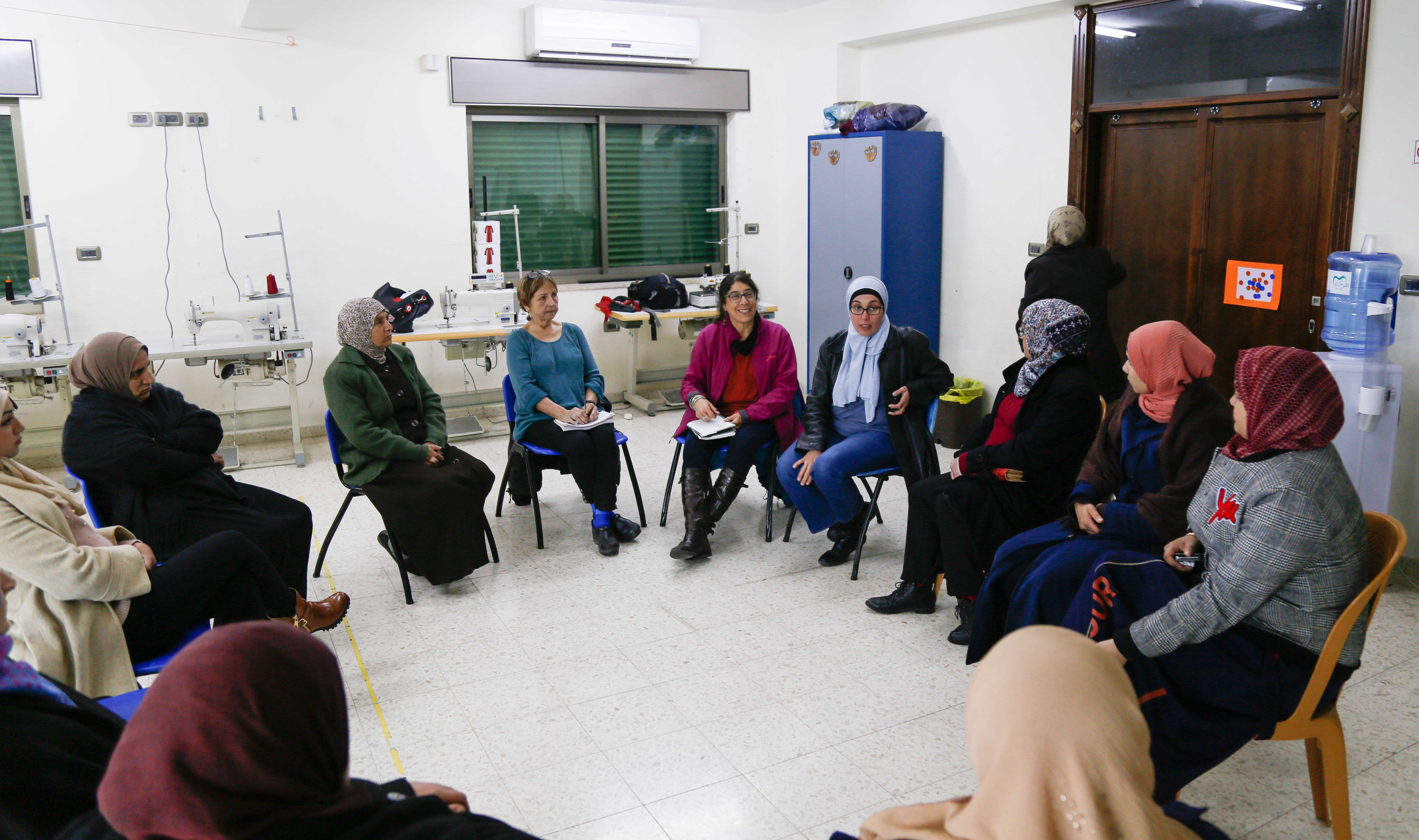 The women worry about their children, their constant use of violent video games, the bad effects of social media. Everyone seems to have an iphone, for better or worse. They discuss children who are anxious, hyperactive, and easily angered. As Sonia probes further, one mother says that the children are angry because the IDF comes frequently to the camp, shooting tear gas and bullets. In fact, an 18-year-old volunteer medic from Deheisheh camp, Sajed Mezher, was killed less than a week ago while trying to care for a wounded Palestinian. Manal, our organizer and translator, starts to cry. Sonia talks of the need to have groups for the children after traumatic events, where they can vent their feelings and share their pain with their peers. Clearly the staff also needs such support and we talk with Manal after the program about the need to care for the caregivers, something that rarely happens in resource poor, high risk areas where everyone shares the same levels of trauma and the trauma occurs on an almost daily basis. I learn that the beautiful Lajee Center garden, with its sports field covered by high netting, is no longer safe for children as the IDF soldiers shoot tear gas and bullets into the children’s park. The netting is frayed from tear gas canisters. It seems that there is no limit to human suffering here.

The women impress me as strong and smart, and particularly fierce when it comes to their children, proving once again that mothers are the key to the survival and resilience of Palestinian refugees.

Nahil Bandik, a Beit Sahour yoga instructor, and Cynthia, a nun from India who lives in Bethlehem, sit serenely in front of a row of women, with two little boys squirming on the floor in the corner of the Women’s Unit at Alrowwad Cultural Center. The instructors are teaching a form of sitting yoga that is perfectly geared for the seven women attending, three in long abayas. We all sit on plastic blue chairs, focusing on our breathing, as Nahil moves us to a place of deep relaxation and then walks us through a series of stretches starting with our heads and leading to our toes. Bending my neck sounds like ground glass, but I can feel the stiffness in my shoulders and back gradually releasing. Other women say they feel relaxed enough to go to sleep, calm, happy to have separated from the tension of the camp. Nahil talks about taking this peaceful feeling with us as we face the stressors outside. I drop my shoulders which tend to hover close to my ears and take a deep breathe. I wonder what would happen if everyone in this crazy place started releasing their tensions and sore muscles, experiencing an inner peace and openness.

As I write this note, children upstairs are doing a yoga lesson with saffron-clad monks visiting from the French Buddhist center founded by Zen Master Thich Nhat Hanh. And downstairs, teenagers are thumping, and kicking, learning dabke with a young man who looks almost weightless as he takes them through the intricate steps.

At 4:00 I join ten young women (15 to 23), half wearing hijabs, for a girl empowerment workshop. As with the older women, every one of my comments triggers a lengthy, loud, somewhat combative conversation, with lots of hugging and expressive hand gestures. The drama level is high. Not surprisingly (given the age level) most of the hour is spent discussing body image issues, too thin, too fat, weight in general, dieting, hair growth, acne, premenstrual syndrome. I urge them to think about what makes a woman beautiful, what are the messages from commercials and TV.

One answers, “Men like their women fat, but when the mothers come to pick a bride, they pick a thin one.” One responds that there are many ways to be beautiful. They all nod their heads in agreement about the negative impact of commercials.

There are many questions about hormones and I am asked to review the hormones in the body and describe what they do. One knows what an adrenal gland is for, so I suspect they have had some biology education. Most have had urinary tract infections and are drinking lots of water. At the end there is a question about vaginal discharge which provokes a spasm of giggling. Unfortunately the hour is shortly over and we haven’t gotten close to sexual education. I hand out my list of culturally sensitive Arabic websites focusing on women’s bodies and sex, and most everyone is suddenly quite interested, taking photos of the list on their phones.

Share this to:
previousThe pressing question at a Palestinian health gathering: How to illegally collect sperm from prisoners – June 4, 2019
nextGetting in, and getting out, of Palestine – June 19, 2019