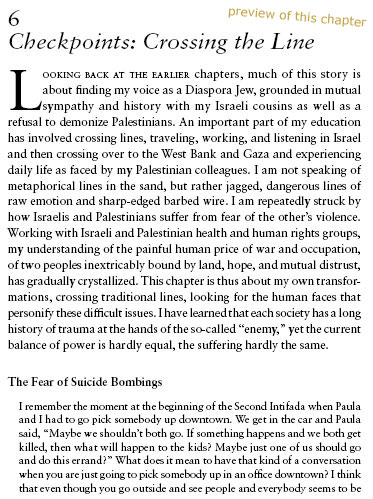 As we traveled through the West Bank, every day we encountered some of the over 700 physical barriers or obstructions that make up the system of checkpoints. These range from highly militarized terminals and guard towers to piles of dirt, ditches or stones. The photos that follow are taken at checkpoints in or near:
Kalandia
Nablus
Tulkaram
Qalqilya

Our experiences ranged from easy passage without any checking of documentation, to hours of frustration and waiting, only to be refused entry. The decisions seemed quite arbitrary and unpredictable. This is a complaint we heard frequently from Palestinians.

Some checkpoints allow vehicular passage as well as foot passage. 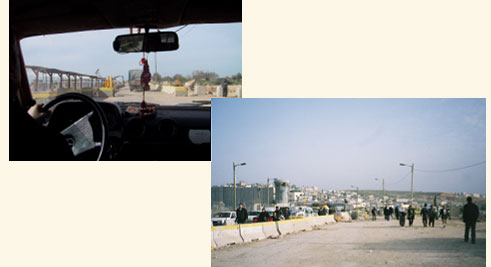 Checkpoints, however, often obstruct vehicular traffic with concrete blocks or yellow gates. Palestinians are forced to walk between the barriers, often hundreds of feet, carrying packages, children, etc, and then to take one of the many taxis waiting on the other side. 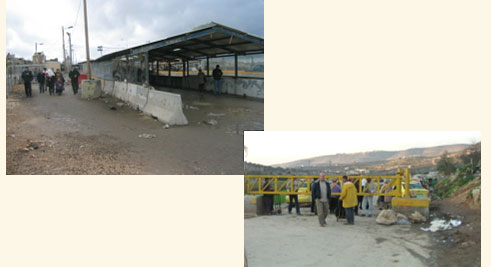 The gates can be closed to seal an entire area. At other times, checkpoints may be more isolated, sometimes unmanned posts such as the one on the right. These obstructions have created havoc within the health care system. 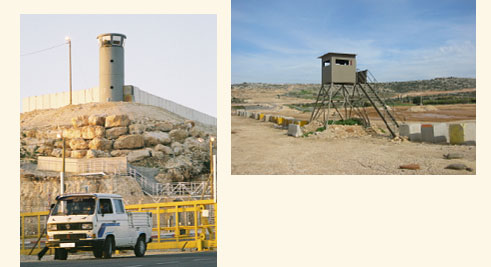 All vehicles are stopped at checkpoints, from cars, donkeys, ambulances, to trucks and taxis. The delays and unpredictability cause major disruptions in the daily lives of Palestinians and in their economy. We found repeated evidence ranging from sick people unable to cross for a doctorâ€™s appointment to fresh produce rotting in trucks. These delays did not have any obvious relationship to security issues. 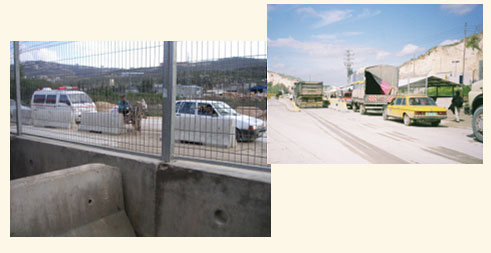 We were stopped at temporary â€œflying checkpointsâ€ as well as permanent
military installations. 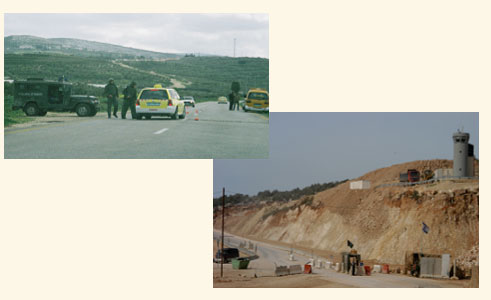 Concrete obstructions were common. On the right, the separation wall with its concrete barrier and guard towers is seen intruding on the Kalandia checkpoint. 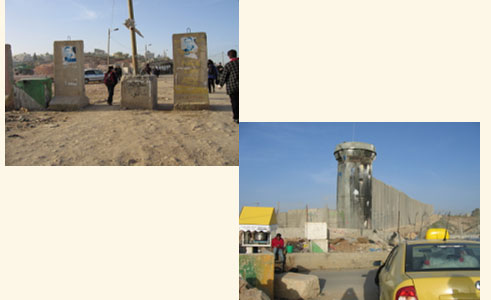 When Israeli bypass roads intersect Palestinian roads in the West Bank, there is often a bridge which allows the Israelis to travel above and the Palestinians to travel below. 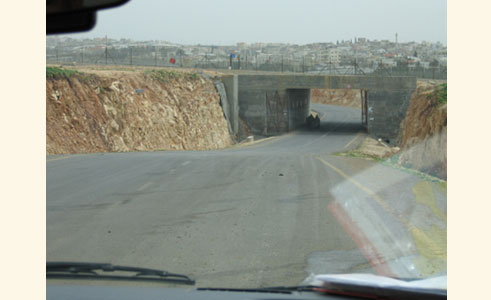 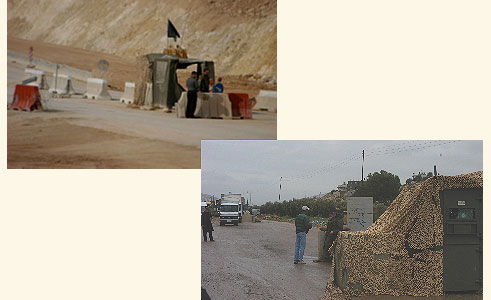 The heavily armed soldiers from the Israeli Defense Forces are often young and their tactics range from aggressive bullying to a more low key demeanor. Everyone approaching the checkpoint is treated as a suspect, setting up an impossible dynamic between nonviolent civilians attempting to live their lives and the perceived security needs of the Israeli soldiers, particularly in protecting Jewish settlers in the West Bank. 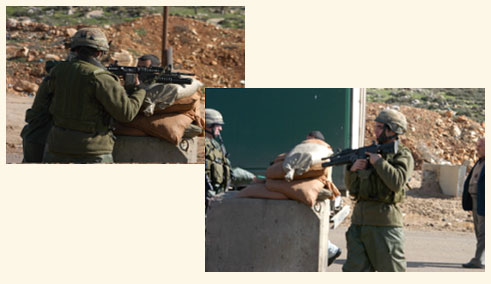 These soldiers are dealing with an unarmed civilian population that is attempting to go to work, school, visit family, shop, see a doctor, get married, etc, and the waits are often long and arbitrary. 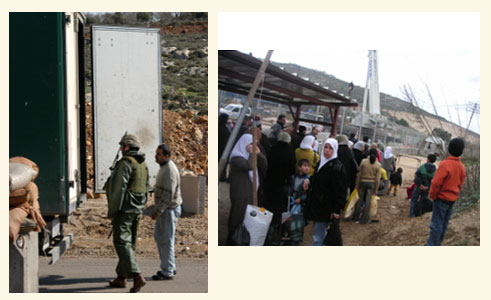 We joined Palestinians who spent hours waiting for permission from Israeli soldiers to cross from one town in the West Bank to the next.

In contrast, Israelis travel through the West Bank on bypass roads which are modern unobstructed highways, linking the many Jewish settlements on the West Bank with Israel. This is the road we took from the mobile clinic in Masâ€™ha, West Bank, back to Tel Aviv, Israel. 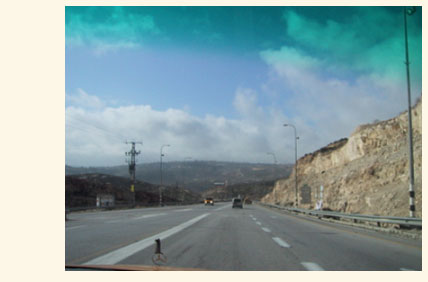 Seema Jilani went with a Palestinian medical student, ST, to pray at the Haramal-Sharif, Noble Sanctuary, (or Temple Mount), in East Jerusalem, the third holiest site for Muslims. Here is the Dome of the Rock, an important Islamic shrine at the Sanctuary. 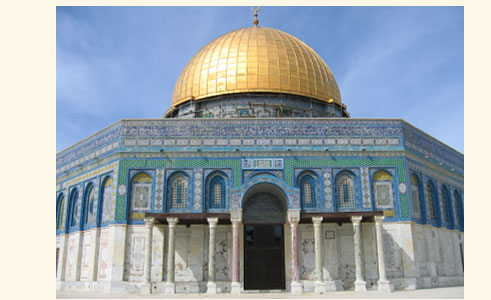 At the checkpoint to the Mosque, the Israeli police were abusive and humiliating towards Seema and she later recounted how painful as well as enraging that experience felt, contrasted against the exquisite beauty and spirituality of the religious site. 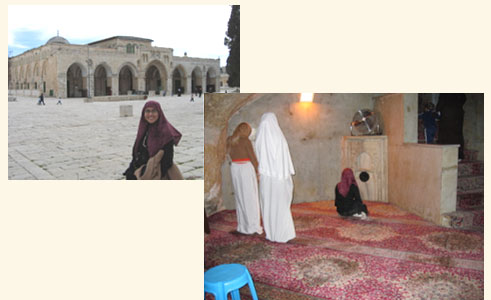 The delegates later that day joined two women from Machsom Watch at the Sawahira Checkpoint outside of Jerusalem. Palestinian workers were returning from work in Israel to their homes in the West Bank and traffic was waiting to enter Israel. 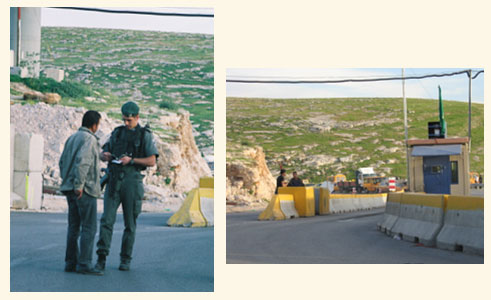 We encountered a family on route to a wedding. A young man, Pascal, was detained in handcuffs and his mother and uncle were pleading with the soldiers to release him. The women from Machsom Watch tried to intervene on the familyâ€™s behalf. 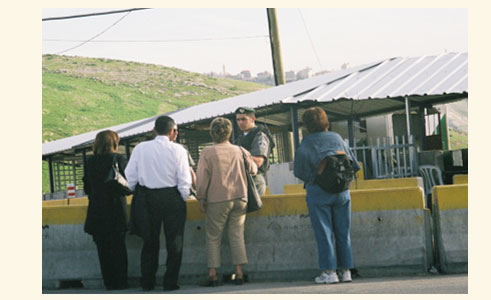 Ofra Benarcy and Ronnie Perlman reviewed legal and military resources that might be helpful to the family while the uncle, a nurse from Jenin, West Bank, discussed his frustration at missing his sisterâ€™s wedding and at Pascalâ€™s lack of subservience in the face of the soldiers. 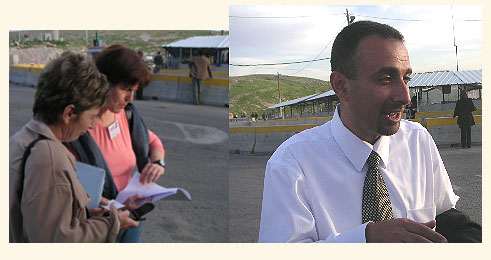 When we visited in Nablus, Dr. Allam Jarrar (on the left) told us of his experience at a checkpoint outside of Jenin, during the presidential campaign of Mustafa Barghouthi (on the right) when they were attacked by Israeli soldiers. 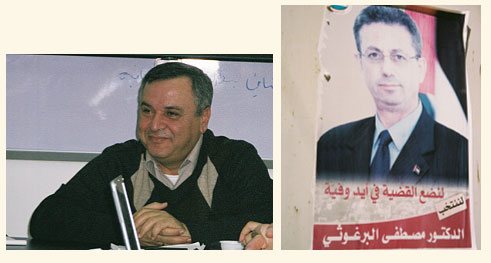 Dr. Majed Dweik, a radiologist and Dean of Students at Al Quds University discussed the five ID cards he is required to carry. He travels from Ramallah to East Jerusalem every day to get to work. He has been unable to obtain a permit for his car. 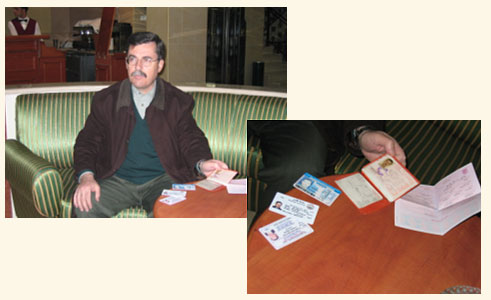 Dr. Dweik works at Augusta Victoria Hospital in East Jerusalem. He noted that patients from the West Bank are having increasing difficulties getting to the hospital due to the multiple barriers and inability to obtain required permits. 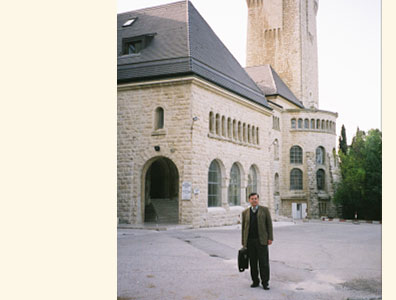