Chapter twelve: Finding the Voice for a Just Peace: Seeing the Human Face 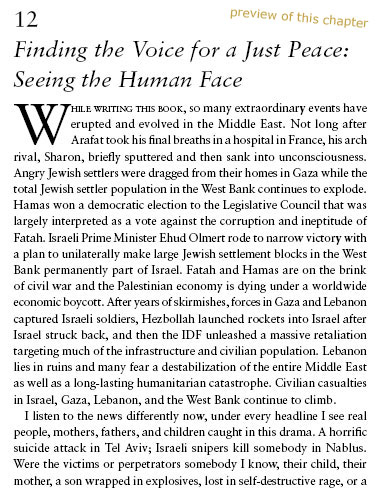 In April 2006, Lior Halperin, an Israeli army veteran and Brandeis University student taking a class called “The Arts of Building Peace”, organized an exhibit of pictures and comments by young Palestinians from the Aida refugee camp near Bethelem and with the assistance of a Brandeis professor, mounted the exhibit entitled “Voices of Palestine” in the Goldfarb Library. Despite multiple efforts at Brandeis to broaden dialogue and coexistence efforts between Jews and Arabs, this exhibit became very controversial and was removed several days later, reportedly at the behest of senior administrators. It was then displayed uneventfully at MIT (Massachusetts Institute of Technology).

The photos that follow contain the entire Alrowwad painting group.
(click for large image, then use your back button to return to this page)

As we talked with Jews and Palestinians who refuse to be enemies, we were also confronted with the level of hatred and distrust that permeates both societies. On the left is a garbage container in Tulkaram, on the right, a shop in Hebron. 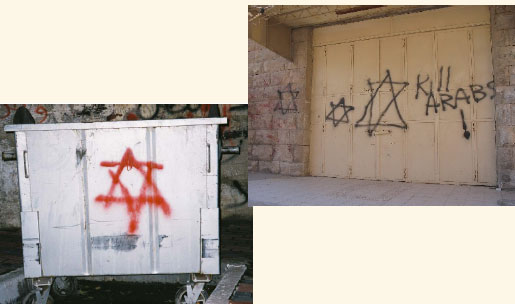 We also developed a greater understanding of the impact of Jewish settlements in the West Bank on the future of Palestine. On the left is Pisgot, near Ramallah. On the right is open sewerage from a Jewish settlement, draining into a Palestinian olive grove. As we look towards the future, I wonder whether the ongoing occupation, dense matrix of bypass roads and checkpoints, and the growth of Jewish settlements have actually made a viable two state solution a physical impossibility. I wonder how two peoples with such a history of trauma and loss can heal their many wounds, and what is the responsibility of the Diaspora communities.

I encourage you to read Broken Promises, Broken Dreams, and to walk with me on this complicated journey. It may then be possible to see the face of the Palestinian enemy as equally human and equally entitled to what we would want for ourselves.