I first met Dr. Mona El-Farra several years ago in Washington DC and I have followed her work and reports primarily through the Middle East Children’s Alliance. The taxi takes me to the Red Crescent Society main hospital through grid locked streets, aggressive nail biting moments that remind me once again that in this part of the world, there is very little personal space, especially when it comes to cars. Mona and I find a book lined office to talk: she has a head of thick black hair, a white and red patterned scarf, pearl earrings, and a turquoise bracelet. There is a fierce look of determination about her, but I sense an immense fatigue in her eyes. She lost nine relatives in the recent war. 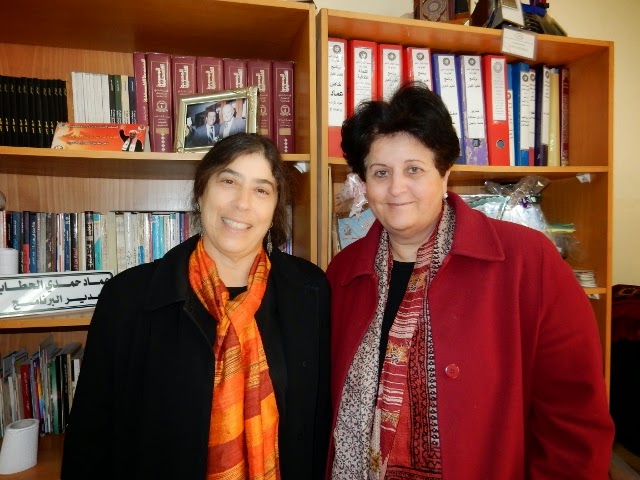 She explains that during the Israeli attack, the hospital was bombed. “I have been negatively affected by the bombing. I am fine but it was a very hard time, but there is a feeling of uncertainty, it may happen again.  Besides that I am trying to travel to see my children in the UK, I have been invited to three conferences, but no permits, so I am stuck, maybe a trip to Seattle in May.” She will miss an upcoming conference in Ireland; there is a totally understandable stress and tension in her voice and I am trying to imagine the reality of a physician’s life trapped in Gaza and assaulted by repeated military attacks and human tragedy.

Mona takes phone calls while we talk, the man who is sharing this office with us is smoking. He is in charge of fighting illiteracy, a daunting concept when so many schools have been damaged or destroyed. 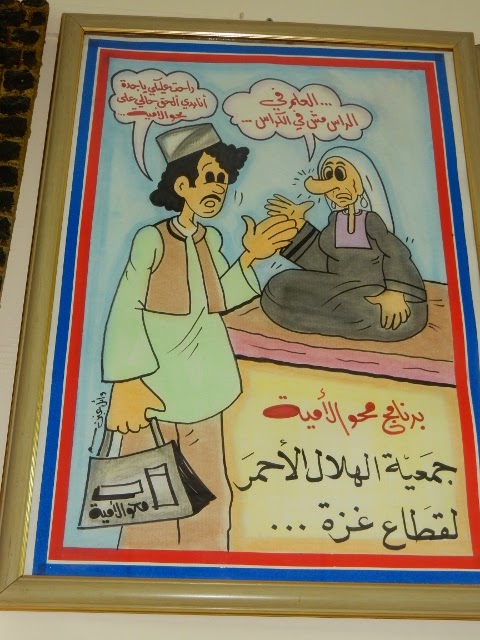 poster of literacy campaign at Red Crescent Hospital in Gaza

Mona explains that she is the deputy chair of the Palestinian Red Crescent Society of the Gaza Strip and the director of Gaza projects for the Middle East Children’s Alliance. She is also a prominent human rights and women’s rights activist born in Khan Yunis, Gaza.

“The current situation is miserable, on the edge of collapse, there is no reconstruction, thousands of families need homes, water is difficult and salinated and of poor quality, next year there will be no water in the aquifer, so the problem is building. 96% of the water is currently unacceptable for drinking this year, there is no regular electricity, only 2-4 hours per day.  After the war, the hospital got donations for a generator, but there is not enough fuel.” They need the generator to work the MRI machine 24 hours per day and this is very expensive.

She continues, “400,000 children are traumatized after the attack due to eye witness experiences according to the UN and UNICEF.  I see that those kids, age five to 16, who are suffering this trauma, were eye witnesses of the attack, are the future youth, those kids will be the future negotiators.  When Israel hits Gaza, it hits the psychological well-being of those kids. They will either be very, very radical, filled with hatred…so hatred and lack of peace.” [Netanyahu, are you listening?] She describes the terrors that these children have seen: “war, killing of parent, home bombing, running in the streets, killing of civilians.  They currently need programs like MECA, Play and Heal Program of MECA, clinics for kids and families for psycho-social support, so this is the extra burden.”  She admits to feeling strained with a lack of resources, “Nobody takes care of me, I suffer extra systoles, high blood pressure, no one cares for me. I need a break, needs rest for one month. It was not good before the attacks, so now there is more work.  To help people, lots of pressure.” Her supports are her friends but they need support too.  “For example, I am trying to leave.”  Amazingly, she had the chance to leave during the war on her British passport, “but it was my duty, but after attack I couldn’t leave.” She tried to get a permit via Erez checkpoint but was refused for “security reasons.” “This is the case for 95% who try.”

Mona remarks that she is managerial, “but during the war I saw patients, the bombing was heavy across the road from the hospital, it was affected, I came daily to emergency, all kinds of staff who could get here,”  Some worked 24 hours, some did a tele medicine service for patients who couldn’t reach the hospital. “They talk directly to the doctor for advice and this worked, we had many calls, then we received injured patients.” They worked in cooperation with Shifa Hospital which was overloaded, equipment was not working, issues around MRIs, CTs, xrays. Patients who were injured were discharged from Shifa, and came for follow-up care of their injuries to Red Crescent.  The team as well went to chronically ill patients who lacked medications, who needed help at home.  They made field visits under fire, in ambulances went to see diabetics and cardiac patients. Some areas had two to four hours of electricity, some mobile phones were functional and in other areas there was no telecommunication.

The second week, Israel started a ground attack in Shuja’ieh (or Shejaia depending on the map) in the northeast.  “75,000 people left their homes under intense attack, like a flooding of people.  It reminded people of 1948, early in the morning, people killed in streets, rubble, they went to schools for safety, came to the hospitals for medical help.” She coordinated with the UNRWA schools, started doing clinical medicine, there were 700 cases per day. “I worked as GP, gynecologist, dermatologist, asked other centers for volunteers, but we were well organized.’

The trauma and bitterness poured from her troubled memories.  “A child age seven on the second day of [the attack on] Shejaia came with blisters on his foot, walked a long way, hungry and thirsty.  He came to the clinic with his parents, a nurse accompanied his mother to the MRI machine, his mother was watering plants and was hit.”

“A child age five came to the clinic, with a head injury, we asked his name, ‘unknown.’ He was  comatose, whole family died.  Anything about him? We don’t now, the whole house destroyed, even which house he came from, he did not survive.”

“There are1800 orphans just from the last war.”

Dr. Mona’s face deepens with sadness. Her cousin in Khan Yunis, Abed Melek, a 65 year old farmer, ran into the street with his grandchildren when his house was hit. “He was killed, four children killed in their pajamas, five adults were killed, another ten were injured in his family…. I have story of myself which reflects the situation of Gaza, no place was safe. When shelling was heavy in my neighborhood, I went to stay with friends.  Then there was shelling in their area, people were running from place to place, but I went to the hospital daily, running with clothes on your back.  Diabetics did not take their meds.” I feel like I am sinking under her grief and her stress. “People had no IDs, there were unbelievable bombs, shaking, maybe sound bombs, no white phosphorus.  This time there was a warning rocket on the roof, [but] this can kill people. Another Khan Yunis cousin was given 15 min notice and then the house was demolished.  A nurse here from Red Crescent Society Gaza hospital, her daughter, son-in-law and two grand-children died, she still suffers.  Two of the staff lost homes completely, a nurse and an administrator.  All of them ran from place to place, so not enough food, suddenly you have 40 people in your house.  MECA responded directly. I bought food and clothes and was later repaid by MECA.”  Mona got food, milk, biscuits, blankets, and water tanks and coordinated with MECA volunteers.  She found that the markets trusted her even without paying.  During the cease fire, she went to schools for school activities with children, music, but she also distributed while there was shelling in Gaza, Beit Hanoun, etc, using the Red Crescent car.  When medications ran out, MECA said, “Buy what you can from pharmacies.”

Mona finds “Netanyahu no worse, they are one politics, very bad to look at Israeli society…I don’t like to call it war, humanity failed, civilians were attacked, there was slaughter, thousands were injured, handicapped, women and children killed, all of these are people.  It was crazy, no outcome, during the attack people supportive of Hamas, defending them, so Israel is stupid.  At the moment, people are unhappy with domestic issues due to lack of reconciliation with Fatah. [Any way out?] But not for the time being, this land should be for all, this is not easy and it needs a lot of work and lots of organizing for unity to Palestinian people and for Israel to admit what happened in ‘48, with racist and colonialist state like Israel it will be very difficult. We need one state, one vote, the middle east is chaotic but things change, like the collapse of the Soviet Union, [but] the children now will not be good negotiators [later].

As if that were not enough, Mona states, “19 health workers were killed in the Gaza Strip, clinics, ambulances were destroyed.  If you want to talk about international law, even if there was one militant in a school, you must respect international law.  Schools with displaced families (like Jabalia) where attacked, [displaced people] fled only to die inside the school, now 10,000 people are living in schools. MECA supports kindergartens.” After the big massacres, Mona “went to Shejaia during a cease fire, I could smell death everywhere, destruction, [she sighs deeply].  Our role is to continue to support people, I am MECA director, but I need someone to support me, we all need a break, a break from thinking it may happen again, it will be the end of Gaza.”

And then there is the environmental catastrophe. “Water reservoirs were hit in the north and this affected water in Gaza, electric plants, schools for disabled, streets, and there is no reconstruction.  Because of the instability re: the next Israeli attack, international donors will not give.  My home, shattered windows, I didn’t live there for one month.  I moved to another area also dangerous and the nearby buildings were hit.  I couldn’t sleep, worked twelve hours, stayed with friends, communicating with MECA with thanks for their generosity, it was lifesaving.  The schools used the MECA water unit, the MAYA project, a desalination project, supervised by engineers. All Gaza drinks desalinated water.”

“This is not about people who were killed, it is about us who were waiting for death every minute. I do not pray, I used to walk, (had pneumonia), I feel low.  I usually fight depression with walking, but my toe hurts, I had bronchitis, there is a lack of electricity, with no lights at night I do not feel safe.”

Somehow, Mona finds the strength to continue to worry about all the needy people around her.  It seems that women jailed in Hamas prisons, have no access to medication. She hands me two scripts, I can decipher two meds for yeast and BV. Could I possibly see if we brought in any of these medications? The women are in jail as thieves collaborators, whatever, “but they have their rights, men have no medicine either.”

I free associate to that bizarre and frightening comment made by Dov Weisglass, advisor to then prime minister Ehud Olmert, back in 2006 about putting Palestinians on a diet , but not letting them actually die of hunger. Well folks, Palestinians are now facing starvation, not only economically but also emotionally and spiritually, and the compounding tragedy is that their dedicated, exhausted health care providers are starving with them as well.