It is Good Friday and Erev Pesach and I am celebrating the day by taking you, dear reader, on an exploration of the landscape of occupied Palestine.  The sun is in its glory, birds are singing with the passions of spring (after all, what do they know of occupation), and I am eating some freshly made pie concoctions of oregano and goat cheese, all drenched with the life force around here, olive oil produced on the ancestral lands belonging to my host family.  These urban folks have invited me to their village of Sarta and I am taking you there, mile by occupied mile.

We are traveling north from Ramallah, there are permanent checkpoints and checkpoints like Jaba’ that are closed about once a week (unpredictably of course to cause maximum havoc), halting all north/south traffic. We pass the Jewish settlement of Psagot and at the DCO checkpoint I see a grey Israeli guard tower and two soldiers; they check the husband’s ID and we are waved through.  It seems there is a cat and mouse game that is played out between occupier and occupied: the soldiers are generally young, unsophisticated, and the Palestinians have spent years developing strategies: where to go, which permit where, fake IDs, real IDs and needless to say they have had a lot of time to practice.

I can see Psagot expanding eastward; we head north on Route 60, an Israeli army jeep just ahead of us.  I notice that all the signs are for Jewish settlements, it seems Palestinian towns and villages have been made geographically invisible. We pass a guard tower on the left, a sign that metaphorically fascinates me: “Caution side winds,” and expanses of spring green penetrating the dynamic grey/brown rocky hills.  It is pretty spectacular. We pass the Jewish settlement of Bet El, the official coordination site of Israeli occupation in the West Bank and formerly the central command headquarters. On the right I spot the impressive settlement of Ofra, circles of red tiled houses and barbed wire and then the sign: Ventra and Tanya Wineries.  Translation: the nice kosher Israeli wine you buy at your local supermarket probably comes from grapes grown illegally in the occupied territories.

On the right there is a collection of beautiful Palestinian homes, Turmus Aia, many houses owned by Palestinian Americans who want a foothold in their homeland; last year this is where an IDF soldier pushed and killed a Palestinian activist. More massive rocks, a single tall minaret surrounded by a cluster of cream colored Palestinian houses, stubby trees clinging to rocky terraces, Israeli flags flapping in the wind, Chag Sameach, this road is used by everyone, but there are obviously no yellow or green flags for you know who.  Lush green farms spread across the valleys, tall cedar trees pierce the landscape, dunums of grape vines fan out before us; it seems that the settlers have a nasty habit of seizing Palestinian farm land for their own under the what’s mine is mine and what’s yours is mine theory of co-existence.

While we drive by many Palestinian villages I am impressed with the amount of open space around us and I am informed that this is Area C. So a quick Oslo Accord lesson: we are traveling through Area C, about 60% of the West  Bank which is under total Israeli control and the location of the majority of Jewish settlements.  Sarta is in Area B which is under Palestinian Authority civil control and shared Israeli military control, shared being a pretty theoretical concept here.  Someone from Sarta built too close to the edge of B and C and their home was demolished. Area A is the main cities, the urban population concentrations which include thefellahin in search of work in Ramallah or Nablus or what could now be viewed ironically as a people without their land.

Farmers and families are bent over in their fields, the earth a rich red color, the hilltops are scattered with tiny outpost settlements, rows of caravans that will someday be major colonies. (I am just being honest here so take a deep breath.) We pass Zatara, a major rotary with signs to the Jordan Valley as well as Tel Aviv, a mere 53 kilometers away, and of course a major checkpoint that can easily close down the entire area. Grey rock huddle like sheep, the settlement of Ariel on the left is a wide expanse of apartment buildings and continuous construction, surveillance towers puncture the horizons; at the base of the mountain that is Ariel lies the unfortunate town of Marda.  It has had no new construction approved since 1967 and desperate families, who strangely enough have continued to have children, get married, and need housing, are expanding vertically, the air above the roof being the only space not quite under Israeli control.   Ariel really goes on forever and forever.  Another rotary and guard tower, a sign to Tel Aviv/Jafo and we come to the largest industrial settlement in the West Bank. In Barqan, (which is partially on land expropriated from Sarta) there are a variety of major industries including plastics, food processing, wood production, huge yellow cranes, tractors, and construction equipment.  International organizations have documented that industrial parks in the West Bank such as this easily evade Israeli environmental safety regulations, thus contributing to the pollution and devastation of Palestinian land and water resources.  Perhaps I am feeling too emotional, but I call this the slow rape of Palestine.

Another tall Israeli guard tower, signs to Qalqilya on the right, followed by a massive settlement that is under construction and a sea of yellow flowers, spring groundset, completely oblivious to the turmoil around them.  We pass the family’s grandmother’s land that has been taken by settlers, rows of majestic, resilient olive trees; interestingly the original family still harvests the olives. Past the home of the mother, past Bidya, and then a left to Sarta, old winding roads and clusters of Palestinian houses.

We arrive in this 500 year old town of teachers, and farmers, and PA employees, people who have never left, people who are returning, or building their country homes on family land.  Families work in Ramallah or open businesses in Norway or get PhDs in Ohio, but return for the children or the land or the smell of orange blossoms in the spring and the quiet of country living.  It has an old city, ruins and courtyards, and children playing along the street, a mosque and a school.  The old men still wear suits and ties on the weekends and red checkered kaffiyas with the black iqal circling their heads.  At the top of the hills I can see the high rises of Tel Aviv. 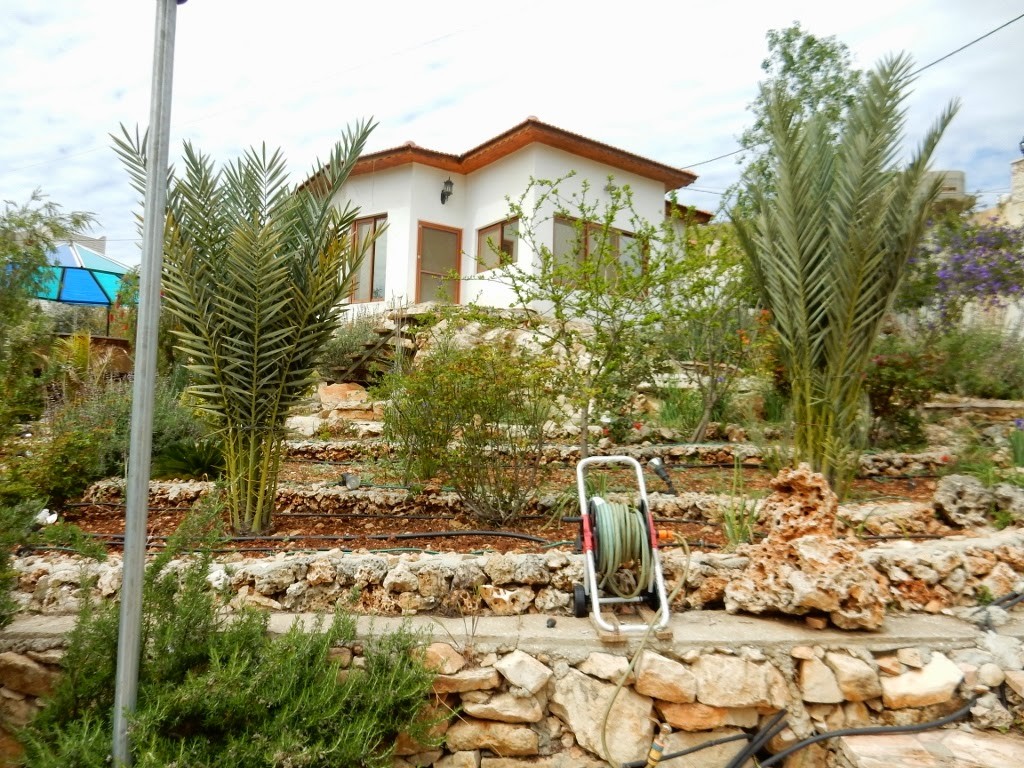 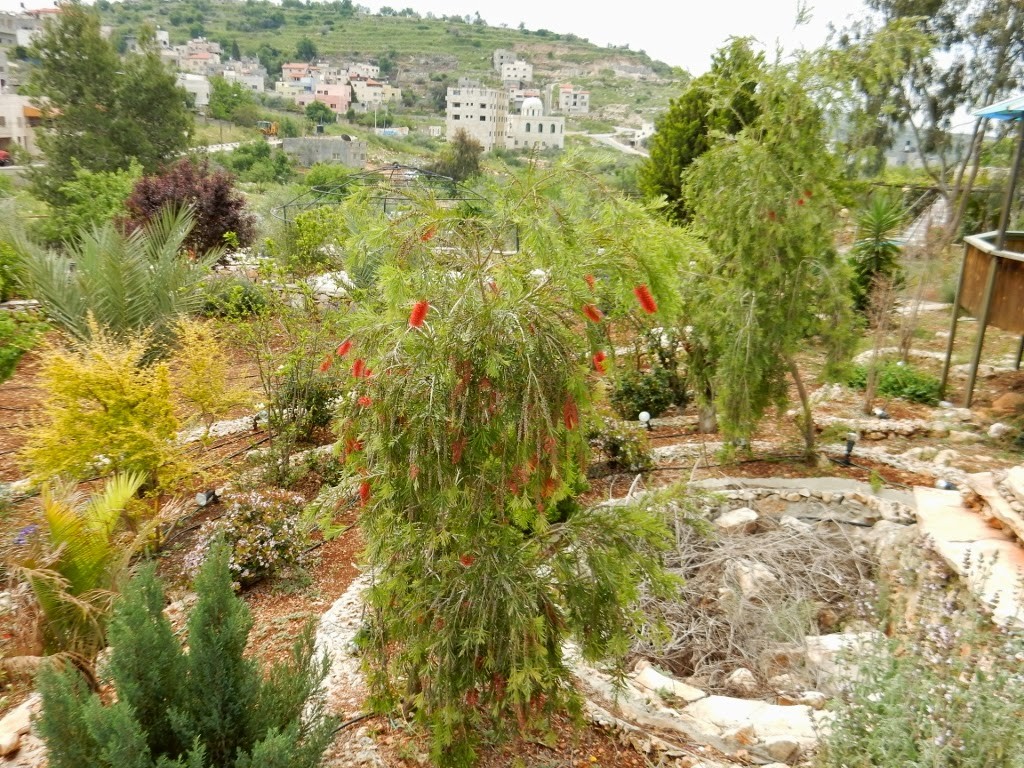 I am completely unprepared for what this family has built here.  On the grandfather’s land, surrounded by brothers and cousins and relations of all kinds, we enter a magical Garden of Eden, white stone paths, gazebos, terraced gardens, roses blooming, metal archways wound with vines that will burst into bloom, and vineyards, olive trees and bushes that sparkle in yellow and red and purple, enormous geraniums; irises and crown anemone spring up between cracks in the stones.  The iridescent sunbird, recently declared the national bird of Palestine (glad those legislators are involved in such important decisions) flits in the sun, drip irrigation winds its way through impending paradise, and walls of volcanic rock frame the paths and terraces. There is a small pleasing white house, a cast of rambunctious well-loved children, and relations to visit.  The nonstop eating and drinking begins early, (a fabulous date cake, followed shortly thereafter by an amazing traditional dish of stuffed squash and grape leaves, lamb, and chicken preceded and followed by tea and coffee on an every hour or two kind of schedule).  I thought we women were “hiking” (at last) while the men were praying at the mosque, but we “hiked” up the hill to the first relation and the date cake. Exercise in Palestine. The only real dose of reality is the Jewish settlement visible on the crest of the mountain from almost anywhere in the garden. It occurs to me that planting this land is perhaps a quiet but palpable form of resistance. 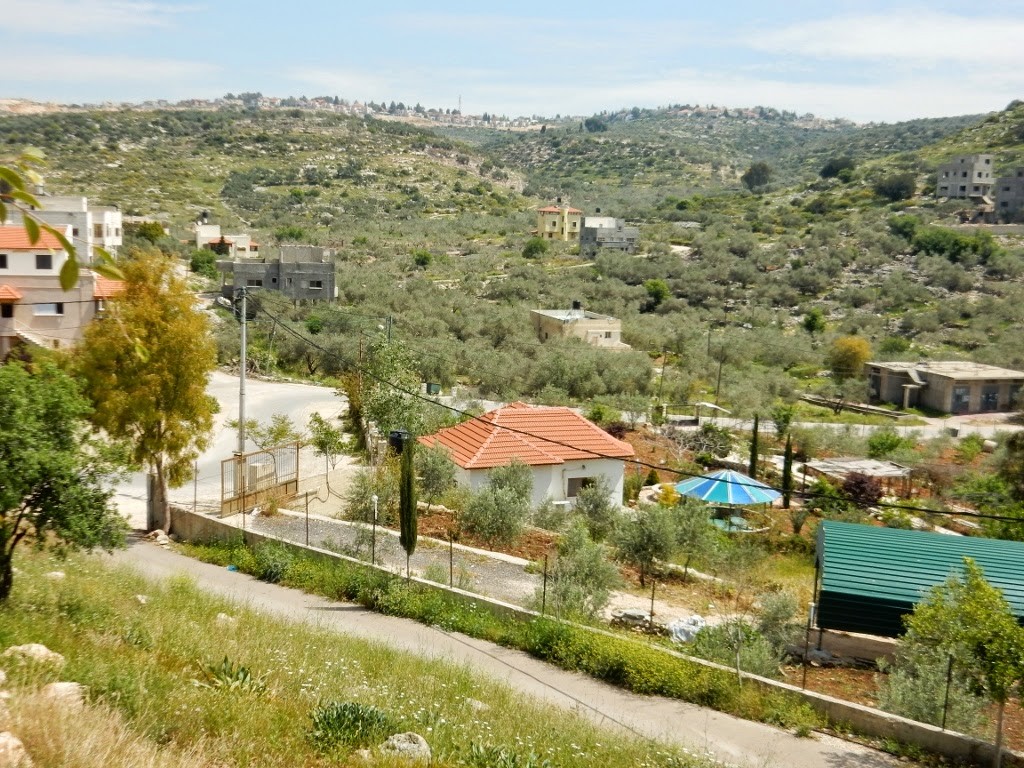 Hours later we head south along the western route, a circuitous snaking mountainous road through Masha, under a modern bypass road (ie for vehicles with Israeli license plates only, translation Jews only), past Israeli jeeps parked ominously along the road, the fortress like settlement of Ofarim, Palestinian wedding parties, Israeli guard towers, Fatah flags, snub nosed goats and braying donkeys, to deliver me to my friends in Aboud, an intriguing village that is half Christian and half Muslim.  I learn that “Palestinians turn stones into gold,” cutting the massive rocks that pervade the landscape and selling them to Israelis and Jordanians, while “Jordanians turn gold into rocks,” buying these stones to build their cities.  We drive by a mountain top that has been flattened, huge piles of dirt, the beginning of a new settlement, through more olive groves and farmers bent towards the earth. Past tiny villages and flashy gated mansions, baby olive groves, replanted after decimation by Jewish settlers or IDF, then left into Aboud.  The sign, “Welcome to Aboud” lies on its side by the road and a rider-less horse gallops by. Reality as allegory.

I am excited to spend Good Friday with a Christian family, another cross cultural experience for this wandering Jew and I am in no mood to celebrate Passover.  As we are warmly greeted, I learn that the Christians in this town are Catholic and Greek Orthodox.  In an unusual show of ecumenical unity, they celebrate Christmas on the Catholic calendar, (December 25th), but Easter (and thus Good Friday and Palm Sunday) on the Greek Orthodox calendar. Thus, I am amazed to learn that in this town, Good Friday is next week.  Fortunately for me, the women have already started cooking traditional cookies and breads for Easter, delicious little cakes filled with dates (the crown) and walnuts (the sponge).  If you are lost, check out The Passion.  Let the eating begin. By 11:00 pm, many cups of coffee/tea/juice/plates of couscous/chicken/special Easter bread drenched with olive oil and za’atar… are you getting the picture? I am discretely wrapping tasty morsels in tissue and dropping them into my bag to avoid offending anyone in this generous, food-is-love you are most welcome kind of place. 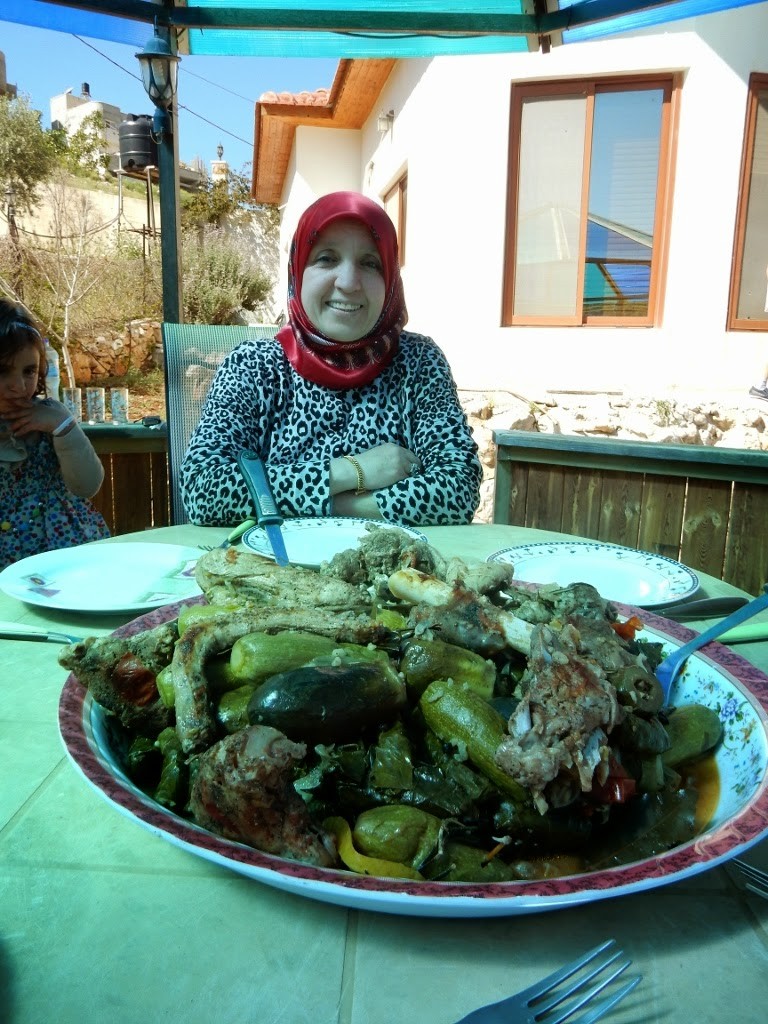