At least four people were killed and 15 more injured after a truck plowed into pedestrians in Jerusalem, say Israeli police. According to police spokeswoman Luba Samri, the driver swerved into a group of Israeli soldiers who had just gotten off a bus at the Armon Hanatziv promenade.

The driver “has been neutralized,” Israeli police say. They are describing the killing as a terrorist act by a man who hails from Jabel Mukaber, a predominantly Arab neighborhood in East Jerusalem. Israeli police have placed a gag order on further details pending an investigation.

“We know the identity of the attacker, according to all the signs he is a supporter of Islamic State,” Netanyahu said, according to Reuters. “We have sealed off Jabel Mukabar, the neighbourhood from where he came, and we are carrying out other actions which I will not detail.”

Israeli emergency services say that the four people — three women and one man — killed in the attack were in their 20s. At least 15 people have been hospitalized.

The Guardian offers more details from the scene of the attack:

The attack took place during a visit by a large group of Israeli soldiers to a scenic outlook overlooking Jerusalem and the Old City.

The scene of the attack is also a few blocks from the American consulate in the city which speculation has suggested could be controversially re-designated as a future US embassy by Donald Trump’s administration if he moves the embassy to Jerusalem although there was no immediate indication what motivated the driver. …

The driver was shot dead by other soldiers and one of the tour guides with the group that was hit as the driver reversed back towards the dead and injured.”

A few brief thoughts that will not be mentioned in the mainstream press:

These kinds of killings are horrific and are to be condemned. “Neutralized” means the suspect was killed presumably in his truck with no arrest, trial, conviction, or deliberation of punishment. Jabel Mukabar is a Palestinian neighborhood in East Jerusalem that I have visited on a number of “alternative tours” and it is a place where the ever increasing poverty of Palestinian East Jerusalemites and the steady Judaization of East Jerusalem is readily apparent. Suggesting ISIS as a connection is a frequent Israeli tactic to gather the sympathy of the international community against “the vicious savage Arabs who attack innocent Jews.”

It is much more likely that a young Palestinian man who lost all hope as well as the ability to cope in an increasingly oppressive situation, felt driven to a violent killing spree targeting the people who have made his life a misery and the fact that soldiers were the victims lends credibility to this theory.  He also may have had mental health or drug problems that are rarely treated in this resource poor section of the city.  For most Palestinians, their only interactions with Jewish Israelis are with the military at checkpoints, home invasions, etc. This does not excuse his actions, but it hints at an explanation. While his motivation is not known at this point, we are all dreading the consequences of our future erratic and dangerous foreign policy by twitter president; the relocation of the embassy will add fuel to an already growing fire. Why anyone thinks Trump is “a true friend of Israel” is totally beyond me.

It is ironic to be feeling safely ensconced in Gaza City.

The day began with the drive from Jerusalem to Erez Checkpoint, first passing the hills around Jerusalem where the Mea Shearim live an ultraorthodox existence reminiscent of 16th century Poland, then the series of Jewish settlements, the controversial light rail connecting settlements with each other and Jerusalem (and avoiding Palestinian neighborhoods).  The traffic increases (like a Monday morning at home) and miles of Jewish National Fund (JNF) forests cover the hills erasing the destroyed Palestinian villages from 1948.

My tortured x-ray vision reads the hidden history: past the crumbling ruins of the destroyed village of Lifta, past Deir Yassin, the site of a horrific massacre of civilians that led many Palestinians to flee in terror, past Kastel where a violent battle took place in 1948, past rows of green Israeli tanks commemorating the battles of the Arab-Israeli War and the heroism of the Jewish soldiers. The landscape becomes more pastoral with large farms, the monastery in Latrun with dunams of grapevines, signs to Ramla, the former Palestinian town, site of a massive expulsion/evacuation in 1948.  The fields flatten and wheat shimmers in the sun.  Our ever helpful Palestinian taxi driver stops and buys us cappuccinos after insisting that we each take a chocolate bar for the road.  We munch on cold dough with za’atar and cheese and the sweetist of oranges, each of us lost in our personal fears and fantasies about the Erez Checkpoint.

The checkpoint is a massive military terminal with rows of cars parked in a large lot and a scattering of internationals and Palestinian families waiting and waiting. After clarifying some documents, we get on line at passport control.  The place is eerily empty and the woman behind the bullet proof glass has a bored expression and yawns repeatedly. While we are all US citizens, I first worry for Mena who is Haitian and at risk for some extra security/racial profiling that many colleagues of color report. Her papers are stamped quickly and she is soon on the other side. I worry about Chung Wha whose passport was stolen so the number on her new passport does not match the number on her Gaza permit, though she has a photo of her stolen passport on her phone.  After some back and forth and a few phone calls and a talk with the supervisor, her papers are stamped and she joins Mena on the other side.  I wait for the light to turn green and hand the bored young woman my passport with my most friendly Jewish grandmotherly smile. She stares at her computer screen, makes some calls, the supervisor returns, they chat and tell me to go into the empty waiting room and wait. Bad sign.

I sit down with my mind racing and my face deliberately smiley and relaxed.  This takes some effort.  Do they know I support the boycott movement? Have they checked my website? Facebook? Twitter account? Did they see me on Israeli TV last year defending BDS? As my offenses pile up, my hopefulness sinks and I start nursing my disappointment and planning my return to Jerusalem.  Finally they call me back and say the problem is that I cannot be 68 years old, the photo is wrong they need another identification document.  I hand them my license and insist that my age is correct, joking, “I was born in ’48.  It was a really good year.” This cracks the tension. Finally they both smile, (Big Accomplishment), hand me my stamped documents and I comment.  “I am going to take all of this as a compliment.” Victory over the ridiculousness of bureaucracy. There is always something new to worry about. Carded at Erez! 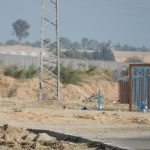 We wend our way through a series of corridors, turnstiles, and finally reach a long caged corridor where a man with a cart loads up our luggage and we get into a little tuk tuk to travel through the no man’s land to the PA checkpoint.  I notice bulldozers and construction outside the cage, maybe a road, more obstructions? The PA passport control is very friendly and then we get to the Hamas bureaucrats who get into a kerflufffle about the passport number discrepancy, which is all magically fixed by the taxi driver sent to pick us up.  It seems that the Hamas computers have been down for almost a week and they are not able to grant permits to anyone, but since we are coming to work with the Gaza Community Mental Health Program, somebody magically makes this all happen. The whole thing takes about two and a half hours. 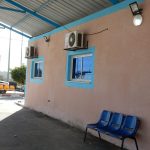 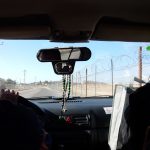 Share this to:
previousHaifa and Akko: The refusal to be forgotten – January 7, 2017
nextGaza beyond the stereotypes – January 8, 2017