We head west into ’48 Israel (ie. the Israel bordered by the 1948 Armistice Line or Green Line) and off to the coastal city of Haifa to meet with two dynamite activists, Jihad Jaburaya and Hazar Hijazil. Our hostel is in the German Colony which is lit up with thousands of lights and weird Santas in honor of the Greek Orthodox Christmas. The magical Baha’i temple glitters up the imposing hill. Palestinians and Germans were expelled from this area in ’48, however the German properties were returned because that is what civilized people do with other (white) peoples’ properties. The Palestinians (of course) lost theirs due to Absentee Property Laws, so we feast our eyes on elegant old stone homes that are now living another bizarre incarnation. 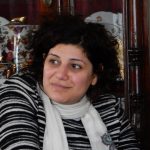 Hazar grew up in Akko and is a bibliotherapist. Her activism started in the West Bank where she wanted to stop the artificial separations between Palestinians living in ’48 Israel and those in the occupied territories. Her husband Jihad is a lawyer from Sakhnin, the site of the first Land Day massacre in 1976. His uncle was killed. He works as an anti-apartheid activist as well and he and Hazar are the moving force behind an organization called Palestiniat. They are focused on bringing the invisible histories of destroyed villages and massacres to the public eye, both for their own empowerment and personal reclamation as Palestinians and to educate the public that is largely ignorant of anything that does not support the glorious founding mythologies of the State of Israel.

One of their first actions was in a Jewish settlement where they personally delivered a letter to each settler informing them of Nakba history and the commemoration of massacres that occurred in 1948. The settlers hid in their homes as if under military attack. Working with Stop the Wall, they have been involved with prison support for hunger strikers, staying at the hospital with the prisoners. Many of their members are lawyers who see their task as not defending the accused of a particular offense, but supporting the rights of the accused as human beings with human rights. They focus on the two northern cities of Akko and Haifa which once had vigorous Palestinian populations and see their work not as a legal issue, but rather as a national one, of ending the erasure of Palestinian history and experience.

The Tantura massacre where 250 Palestinians were killed, occurred near Haifa and until recently was rarely acknowledged. They have focused on unearthing the facts of the massacre, interviewed survivors who still carry the trauma and the weight of years of silence. Hazar, remarks, this work is “getting ourselves free of being colonized.”

They work mostly through social media, have 35,000 Facebook followers, and chose a feminist form of their name as part of their liberation. Three years ago they did their first Israeli Apartheid Day in Akko.

As I curl up in my heated room after a delicious hot shower, knowing that tomorrow I will learn more about these extraordinary activists is a sweet balm for my sorrowful soul which is haunted by the cruelties that racism, fear, and trauma can produce. I am knowing in this primordial way that once again anybody is capable of being a monster and that Jews in general and Israelis in particular can no longer hide behind our personal tragedies, pogroms, and Holocausts. We must own our behavior; we can no longer defend the indefensible. Bearing witness is the first step in this painful but liberating process.

Share this to:
previousWhat kind of monsters behave this way? – Friday January 6, 2017
nextHaifa and Akko: The refusal to be forgotten – January 7, 2017