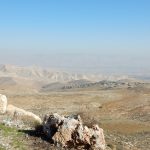 The scene: tucked in exquisite, pink, creamy rolling hills, the earth here is rocky. First we drive by piles of ripped up tents and crumpled possessions from the latest demolition. The area is called Al Hadedyi. 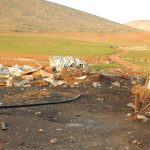 There are a number of large tents roughly constructed with metal poles, plastic/canvas attached by ropes. Chickens, roosters, goats, and donkeys squawk and bray and occasionally a doe eyed child dashes into our meeting. The outhouse is a small metal shed with a hole in the floor. The “kitchen” is a smaller tent. 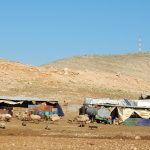 We are warmly welcomed by the 67 year old head of the clan, Abu Saquer, a sun wrinkled talkative older man wrapped in a keffeyeh, long robe, cigarette in hand, and four other men who are all related including a set of twins. We are served small cups of bitter coffee. On the dirt floor is a large pan of ashes and electrical wires hang from the “ceiling”. The poverty is breathtaking. 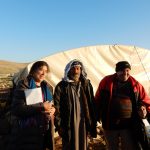 Abu Saquer speaks deliberately and forcefully and his eyes twinkle enthusiastically. After our introductions, he states: “Because we are suffering so much we are open to people from all communities and countries, pleasure to meet you…we are aware, not against the Jewish people, against the colonialist Zionist regime that is oppressing us.” He explains that since January 1, 2017, (ie. in the past six days) 47 structures have been destroyed by Israeli forces. If this continues, “communities will be evacuated from the Jordan Valley.” Between the military and the settlers, “our existence is threatened like never before.” He notes that since 1987, Palestinians have chosen popular resistance, after Oslo, peace never came. Palestinians are constantly being pushed to make more concessions by Israel and the international community. He is particularly angry with the Palestinian Authority and wonders if the gap between the people and the PA will result in a new revolution, an armed resistance, and this will be “very bad and destabilizing.” 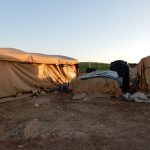 He continues, his voice rising and falling, as he explains the history of the region. Since 1967 the Israeli plan was to evacuate Palestinians from the Jordan Valley which used to be the food basket and center of animal husbandry for Palestine, with exports to Arab countries. There are excellent resources, water and grazing areas. Since the first Jewish settlement was built in the Jordan Valley and the military base established, the first military order took control of the water. Water from the Jordan River was transferred to the Negev and denied to the local Palestinians. They are also forbidden to go closer than five kilometers to the river. 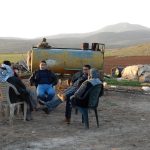 There were many natural valleys and local springs that all fed into the Dead Sea and provided enough water for everyone. All of these valleys are now dry due to the Israelis digging deep Artesian wells. The net result is that the agricultural land has gone dry and Palestinians are not allowed to dig wells. The Bedouins are being functionally ethnically cleansed with the water as the primary weapon.

Abu Saquer explains there were other tools for expulsion used before the First Intifada (1987):
1. Israelis would chase the animals and shepherds off grazing property.
2. The Bedouin were sent to military courts and fined.
3. Animals were shot from helicopters.
4. Animals were “quarantined” and the Bedouins were charged a nightly fee for the jailing of their herds and when they were unable to pay, the herds were confiscated.

After Oslo in 1993 the Jordan Valley was designated as Area C and more disasters ensued. Abu Saquer is still angry. “Did the Palestinian negotiators know the implications? They must know this is a mistake.” So the Jordan Valley was divided up between settlements, military bases, shooting ranges, closed military areas, and nature reserves. But once again in the hard to grasp cruelty of these policies, every spring the settlers and the Israeli Defense Forces (IDF) burn the nature reserves to prevent the shepherds from grazing, as well as eliminating much of the birds that nest in the ground and other indigenous wildlife. The Jordan Valley is actually a special place for migrating birds, including a significant proportion of soaring birds as well as birds endemic to the area including the Palestine Sunbird, Sand Partridge, Black Francolin, Dead Sea Sparrow, Arabian Babbler, and Yellow Vented Bulbul. Think about this for a minute. What about all those gorgeous Jewish National Fund ads boasting of Israeli concern for the environment? Their tremendous technological successes with water conservation? And they are killing birds?

But ethnic cleansing is also very personal. In May 2004, when Abu Saquer was about to harvest his wheat, the mayor of the nearby settlement set the fields on fire, almost destroying much of the compound. The military administrator arrived the following day and asked Abu Saquer who did it? The military man suggested, “Maybe it was a mistake?” Two months later they came back and destroyed the Bedouin tents. “This is a racist government.” One woman delivered in a tent while the bulldozer was destroying it. She named her baby girl Samoud, (Arabic for perseverance, strength). In 2016 when the IDF repeatedly bulldozed the entire compound and beat Abu Saquer’s pregnant daughter, representatives from the EU and PA brought tents which were then confiscated by the Israeli military. When the rains came, Abu Saquer put mattresses on the ground and covered his children with plastic. The IDF arrived and ripped the plastic covers off of the children and threatened to burn everything. What kind of monsters behave this way?

The entire family ended up sick in the hospital. He says: “We teach our children not to be violent, but when I saw my children sick and close to death, how our women look when we see the settlers with all their privilege and we can’t keep a tent. What can I tell my kids? Everyone become aggressive.” 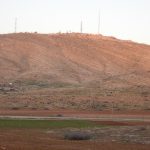 The outrages are almost too painful to list: the man is a stickler for detail.
1. 200 historical wells dating back to the Romans were destroyed by the military and Bedouin are not allowed to renovate them.
2. Natural dams create another water source so the Jewish settlers directed their sewer water into these dams so the Bedouin now have to buy water at 20-30 NIS per cubic meter. This man has three wives and 27 children. Do the math. The water can be purchased in the closest town 17 kilometers away, but due to the dirt obstructions, they have to drive 42 kilometers.
3. Soldiers confiscate their tractors, taboons (traditional ovens), and possessions.
4. Since 1997, he notes a new policy that their communities are destroyed in midwinter when it is unbearably cold or midsummer when it is unbearably hot. Hundreds of soldiers arrive with large tanks harassing and terrifying the families.
5. When the community decided to “pave” their rocky muddy road with stones, the IDF arrived to bulldoze their efforts.

Because of the repeated demolitions and the stubborn determination of the families to return and rebuild, they often sleep in the open air. Even when the Red Cross, UN, and French consulate have brought tents, the soldiers confiscate everything and recently a French diplomat was beaten up. The French government responded by deporting the diplomat.

“So even in the 20th century we have no basic rights.” The children have to travel 40 kilometers to go to school, some stay there in rented apartments, many never finish their schooling. No health clinic is allowed and there are many injuries and deaths from snake bites, accidents, and unexploded ordinance.

Before 1967 he explains there were more than 350,000 Bedouin in the Jordan Valley, the number today is close to 55,000 and they use 10% of the water in the Valley. The 37 settlements with 9,000 Jewish settlers use 90% of the water. The expression “water apartheid” comes to mind. In deep frustration, he asks, “Where is the international law and conventions that support human rights? Palestinians have nowhere to go.”

In 2015, Abu Saquer traveled to France to meet with the European Parliament, he found little support. “All of them are lying, this is the legacy of the occupation. Peace comes from confidence and trust. So who can we trust when we see the realities?”

In 2014 a popular council was formed. Bedouins and villagers are organizing to defend the rights of the people and working on water issues and developing solar panels. They have formed the Land Defense Coalition. Abu Saquer’s manner is part political organizer, rabble rouser, and professor but he ends with great dignity. “Today we are friends and we will continue.” He states that when the Israeli soldiers come to destroy his village, he sits on a mattress, smokes, drinks coffee, and watches them, shaming the vast military machine that is threatened by these unarmed farmers and shepherds. 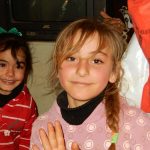 We wander between the donkeys and the chickens, across the rutted road to visit two women and a bundle of smiling, laughing, teasing children in a small jumbled tent. The women are bundled against the cold, warm and fiercely resilient. One has ten children, the other six. We ask how the children deal with trauma, nightmares, bed wetting. And they talk about physical ailments. One son was kidnapped by the IDF and used for dog training. He returned home bloodied and frightened. What can I say? These are supposedly “my people” doing this in “my name” for “my safety.” I feel ashamed and horrified.

I share with the women some olive hand cream made by friends in California where olive trees grow and everyone worries about drought and sunshine. I ask them, “What do you do for “fun” and they laugh and talk about how much they love hiking in the mountains. As we turn to leave, one says, “I hope to live life free from occupation.”