So how this does all look in the field? Once again we pile into a van heading through Ramallah construction like a massive half built Tinker Toy city, shimmering in glorious clear light, with dusty red fields and aspirational patches of haggard but determined olive trees, herds of young girls in blue with white hijabs, walking, laughing, dragging book bags, nearby car dealers, occasional sheep, and a glaring Henny Penny.  A honeyed male voice croons on the radio. We wend our way through nearby Al Bireh with the ubiquitous Coca Cola signs, fairytale wedding dresses poofed in window displays like rows of wedding cakes, piles of bananas, small cafes, signs for Jawal phone cards, banks, Chrysler/Dodge dealerships. The hustle and bustle of an almost modern city.

We fly past Bet El, a major Jewish settlement and in the worst of times, one of the centers of military operations in the West Bank, cruising on a winding, poorly paved, garbage strewn Palestinian road (separate but not equal), past the UNRWA school in Jalazon, pencil thin minarets poking the sky, and then more hills, olive groves, fields and Palestinian villages nesting in the valleys. Past dusty red fields with aspirational patches of olive trees with their rocky accompaniments.

We head through the sometimes onerous Tappuah Junction onto Route 60 heading north, the land silently crying out with the anguished pain of history and human suffering, past highways kindly built for the Palestinian people by USAID (reinforcing the apartheid road system?) and Jewish settlements sparkling in the sun along the hilltops with their long tails of caravans, laying claim to the land, one bloody meter at a time. Dark pointy Cypress trees etch the pale blue sky, signs point towards the northern city of Nablus, we pass Zaatr checkpoint the site of several reported car and knife attacks on Israeli soldiers.  A black military jeep is parked in the rotary, teenage boys stand against their car, trunk open, and there is a veritable mountain of crushed junked cars. The sign for the village of Beita appears as the clouds cast dark blue shadows over the hills.

We turn towards Beita, heading towards a women’s cooperative and soap making factory, a project of UAWC which is supported by Grassroots International.  We are met by Nabila Jaghoub, the head of the women’s cooperative, wearing a grey pink patterned hijab, infectious dimpled smile, checkered collar and a long grey coat.  We are greeted by two other women, also warm, friendly, and solidly competent, traditionally dressed in browns and blacks. These village women started with 18 others to build a women’s cooperative, initially a grocery store and when that failed, a factory to make olive soap and butter, supported by a number of Palestinian organizations and women’s business forums. 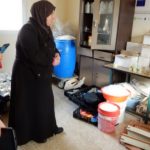 Their stubborn and inspirational story involves acquiring raw materials, machines, donations, an order from a merchant for a big delivery, and then a combination of ingenuity and intelligence that allowed them to grow their capacity.  UAWC provided the finances for a large 100 kilogram mixing machine.  The women, while continuing to feed their large families and keep their households running, made new molds, got new cutters, and more racks for drying the soap and learned to make liquid soap. A tray of tea, each with a large tablespoon of sugar, (just a little please) arrives and the tour continues. 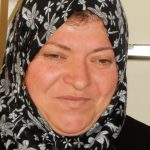 Their big break came when a major marketer, the Anabatwi Family, asked them to produce soap in exchange for olive oil at the family factory. They find that their soap is very popular in Hebron and at public fairs and individual sales, but not in Ramallah and Nablus, and they are now looking into exporting their product.  They turned down a deal with an export company and even a fair trade organization because the price was too low and a huge undermining of the value of their labor. “I work eight hours per day and some man expects me to give my labor for cheap price just because I am a woman!” They have sent 1,000 bottles to Venezuela, and samples to Italy, Norway, and Dubai. Their soap is registered and the brand is called “Palestina.” They are hoping to move into baby shampoo. 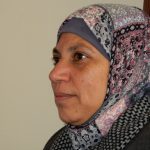 We tour the “factory,” a couple of unassuming rooms with metal vats and blending blades, heat sources, various molds, boxes and a wall of yellow gerry cans of olive oil. Soap bars are piled on the drying racks and shaved fragments await their transformation into shampoo.

Before this business venture, one woman worked in a sewing workshop, the other two had never done anything but household chores and raising families of four and five, which is after all the second oldest and most challenging (though poorly paid) profession. They state their husbands are supportive, they have bigger social lives and support from the women’s union. Now they are well known and respected in the village, invited to run for municipal elections and to be part of village strategic planning and debate.  When there is no dinner on the table, one husband gets takeout food and brings his wife dinner. 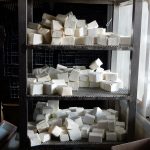 Each member gave 500 Jordanian dinars to start the coop, and receives 50 NIS per day; extra profits are distributed to the cooperative, different wages are paid for different tasks; the money has been useful to help children in college, pay for food, house expenses and clothes. There are now 24 in the coop in this village of 15,000.  An equal number live in the diaspora because there is no more land and no more opportunity in this little town, but the women in the cooperative feel proud and productive, their self-esteem and the positive changes in their relationships are grounded in their demonstrated abilities to produce a quality product and run a successful business, with just a small amount of assistance.

We are back in the van after the requisite purchases, and heading past past Shilo and Kida and a massive Star of David (translation: Mine); breathtaking vistas of the textured, fawn colored Judean Hills, dappled with pink and orange sunrays. Jewish settlements cluster on hills with their ever emboldened caravans, military guard towers march through the landscape and ubiquitous white and grey speckled rocks cluster like piled bales of a magnificent other worldly harvest. We pass the village of Doma where settlers torched a baby in his home and burned the rest of his family as well. More rich red agricultural land, another grey guard tower, and then we turn right towards Taybeh, an ancient Christian city and home of distinctive beer.

Because of another roadblock, we are forced to take a rutted, potholed dirt road winding through gnarled and silver tipped olive trees, terraced with large stone walls, dating back hundreds of years. We are met by Whalid, a sturdy older gentleman with a white mustache and lively expressive eyebrows and Maaddi, intense and passionate, wearing a cap and wire rimmed glasses and five other men, faces deeply weathered by years in the unrelenting sun.

We stand in the rutted dirt, our eyes feasting on dunams of exquisite twisted olive trees, and behind us is a large structure, a water purifying station removing the sewerage which was poisoning a local water spring. 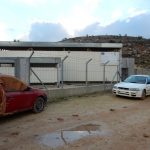 With a combination of pride, agitation, and frustration, the men explain that this water project is a major victory, individual homes no longer dispose of their waste into the ground, and the three cooperating villages, Taybe, Ramoun, and Kufr Malik where the ancient spring was located, are proud of their accomplishment and the possibility of providing clean water for irrigation to cultivate alfalfa and flowers. As the conversation gets more agitated, we learn of the incompetence and shenanegans of the municipal council as well as the Palestinian Authority, the nearby Bedouins who threatened to destroy the greenhouses, the shepherds from the south Hebron Hills who have been run off their land by Jewish settlers and now steal these olives, the Israeli authorities who invaded the villages and installed water meters, the years of resistance, and the ultimate privatization of the water supply. 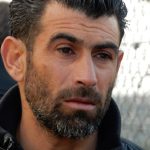 We are now in a circle of raised voices, thick laborer’s hands gesticulating with each new outrage. In 1985 a cooperative was
founded with funding from American Near East Refugee Aid (ANERA) to protect the land from settlers and to “liberate” the water. Now the men claim all they have are their committees that run as true democracies.  Their children help out seasonally but are focused on getting educations and farming is no longer a viable method of making a living. The farmers work multiple jobs, the settlers still burn their wheat harvests, the villagers are facing demolition orders and UAWC is providing legal aid. On man insists, “I have no problem with the US people, my issues are with the government.” Another adds, “I am living in the present and fighting in the past.” 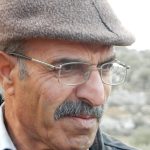 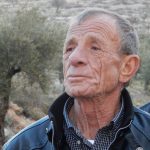 That evening I meet a family in Ramallah whose daughter my husband and I hosted in Boston when she was a medical student studying at Harvard. She is almost five feet tall, soft spoken, with large brown eyes.  Demure comes to mind. Her warm and generous mother prepares a delightful meal of chicken and rice and stuffed eggplants and salad, enough for perhaps the entire medical school class; the apartment is roomy and nicely furnished.  I joke with her sister and two brothers, listen to the family stories, including tales of the father working in the Gulf to pay for the college educations of all his progeny, share pictures of my granddaughter, and play with their large pet white rabbit. The evening feels so normal, so pleasant and nourishing; I just fall into the arms of this happy family.

And then the newly graduated young doctor tells me that the other day she missed her ride to school, had to take a bus and stop at Kalandia checkpoint.  The soldiers pulled her aside and demanded she open her bag. Her mother had made her lunch and in the lunch box was a finely chopped tomato and cucumber salad.  The soldiers started screaming, “Where is your knife, where is your knife, I see the chopped salad, where is your knife.” They screamed and threatened and she sure she was going to be shot, like other suspects before her. After that she blacked out and remembers nothing but tears and shaking. She looks at me with that combination of fear and determination. “I will never go to Kalandia again, even if I am late, never.  I thought I was going to die.”

Unfortunately, another typical day in Palestine.

Share this to:
previousFor the Love of the Land: Building Food Sovereignty
nextWe smoke and smoke to close our mouths – January 5, 2017