During a brief visit to Birzeit University with its cream colored buildings, open squares, clusters of college students looking much like college students anywhere, I peer at a hazy view of Tel Aviv and the Mediterranean Sea in the distance and wonder if any student here has ever actually been able to dip in that alluring yet taunting blue water.

I head to Ramallah to visit the folks who created the Seraj Library Project, an effort to build libraries and centers for youth and women in refugee camps and villages that are mostly forgotten in the occupied territories.  Estafan and Lori are working on their eighth library in Area C in a village called Jiftlik near Jericho in the West Bank. They are building programs, doing fundraisers, and submitting grants to make this all possible.  They are looking for an endowment to have a professional librarian and recognize that the libraries frequently grow into community centers. They acquire books from Jordan, Egypt, and Lebanon and are focusing on local Palestinian vendors and Palestinian writers. They avoid religious titles and books espousing violence or hatred and encourage communities to assume ownership of their libraries. Last year they raised $99,000, this year they are hoping to raise $1 million and offer more programs, books, and computers.   For library number eight, to avoid the impossible to ever obtain permit, they are refurbishing an existing building and hope to open in February or March 2017.  They also run a scholarship program for college students who volunteer in these libraries and have involved 17 students on the project.  Since mostly women and children visit the libraries, they are starting a program called: “My father reads to me,” hoping to engage Palestinian men in the education of their children.

I abruptly switch gears when I walk into a meeting of the Palestinian Agricultural Relief Committee (PARC). PARC is an NGO with a general assembly of 65 people, a staff of 100, representing farmers, women, youth, academics, various agricultural stakeholders. It has helped tens of thousands of farmers in different aspects of the agricultural process as a grassroots organization with a huge network of relationships, working on education, awareness, advocacy and the development of community based organizations and cooperatives. 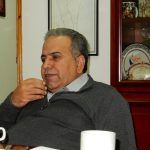 The general director, Khalil Shiha, with a round face, a thick head of silver hair, dense eyebrows, and hands clasping and gesturing, speaks with a mixture of urgency, despair, and resignation. Izzat Zeidan, bearded with glasses perched on this forehead, leans back in his chair smoking and interrupting forcefully when he wants to be heard. I feel a bit run over by the aggressive technocratic conversation, but this is what I can report. The agricultural sector is the most poorly organized political sector in Palestine and every year Jewish settlers seize more Palestinian land, plus there are a host of other challenges.

There is a reason why these men are angry.

In Gaza, 40% of the monthly income is spent on basic food needs so there is an extreme need for more food production, 95% of agriculture there is small scale, but with the added expenses of education, health, transport, not to mention rebuilding from some catastrophic war every few years, there are no shekels for improving the farming.  Funders also require that PARC keep Gaza and West Bank projects separate which is highly problematic and promotes the mentality of division.

Because the government does not enhance or expand production and development, supporting and developing the small scale farmers working traditionally is the role of PARC and this is all done under the crushing impact of occupation where there is no free access to markets, so brokers and businessmen run the show and Israeli brokers dump product into the West Bank and drive prices down. PARC wants to protect resilience and build hope, develop cooperatives, support women with savings and credit and microcredit, advocate for the rights of women to own land, not only legally but also socially. 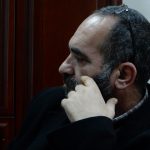 As the air fills with cigarette smoke, they reflect on the so called “safety net,” 160,000 families receive cash support in the West Bank and Gaza at less than $1 per day.  “So what do we do? We smoke and smoke to close our mouths.  The policy is most frustrating.  The legislative council has been paralyzed for years. West Bank and Gaza are separated into two factions. There is no democracy.” They believe that women are both the most vulnerable and the best at coping and surviving. “They will sell their jewelry [to survive], take any job, this happened in Gaza, but women are in the heart of the conflict. Women are not fully equal in public life because of social norms, social violence, violence at the hands of the IDF. They pay the price, they lose their sons.”  But particularly in rural areas women are traditionally responsible for the house and the local economy and they have power, respect, and appreciation within the family.

One man states forcefully that women need education, they need the skills to argue, to negotiate, to explain themselves.  The other man interjects, “Gender programs should be addressing men not women! If you empower women and not change men, nothing will change.”

They don’t think Trump will impact the Palestinians and doubt he will move the US embassy to Jerusalem, “We don’t believe he will sacrifice everything.” Mostly they are afraid of hopelessness. “At the end of the day we need to ask, what is the national agenda for stability? What is the theory of change under occupation, throw off the occupation?  While the first generation of NGOS before Oslo were born from political movements, there is now a tendency for many NGOs to be based on technical expertise and political affiliation.” “The key role is maintaining hope and keeping our dignity.” They note that Hamas is not calling for an Islamic state but rather a Palestinian state.  This is very different from ISIS. “Most Palestinians are neutral people, our national case is our priority.” They cannot believe that in the 21st century anyone would be calling for a religious state.  “This is unacceptable; there is no justification. There will be endless conflict.”

We end with a discussion about climate change which is already perceived as a significant issue.  Since 1991 PARC had been improving local seeds with seed banks addressing climate changes. They have been working on waste water treatment plants, building a green economy. This is particularly challenging when focus must be on a community disaster, risk reduction approach. There is also pressure from major funders and a serious attempt to attract younger agronomists as the youth do not see the agricultural sector as particularly feasible or profitable.

I think of all we have learned about the realities of occupation and I think of the mountains of plastic bags and packaging that are polluting this precious environment. There is much to be done. Where to begin?