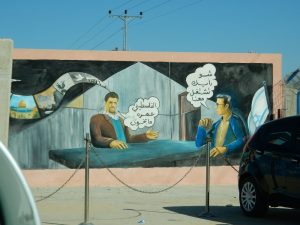 Today we leave Gaza, quickly through the Hamas and Palestinian Authority bureaucracy, down the long caged corridor through the no-man’s land bordered by the 8+ meter high concrete wall, guard towers, and surveillance systems. At our first interaction with an Israeli, an Arab appearing man somewhat apologetically paws through the luggage, peaking into every pocket and corner, confiscating our doggy bag from dinner, my almonds from Whole Foods, several large bottles of water, and my chocolate bars (future gifts) from Trader Joes. 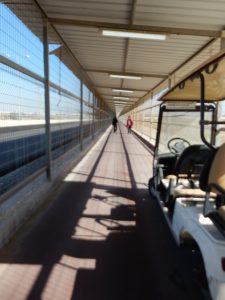 He takes this precious water that we purchased in Israel, schlepped into Gaza, and are now returning, and pours each bottle unceremoniously on the pavement. I can already feel the rage rising up in my body. I look at the list of forbidden items listed on the wall and chocolate is not on the list, so I argue and finally he throws up his hands and lets me put the chocolate back. I need to establish that although I am utterly powerless, I will not capitulate easily. My only consolation is that he does not find the lovely bag of za’atar I bought for my daughter and a pigeon poops on his sleeve while he is doing his job.  I think the cooing pigeons in the rafters are laughing conspiratorially.

The next stop is a room with large trays where all the luggage is opened again and shuffled through again, my computer top is opened, every zipper unzipped, our passports and money and IDs taken. The whole dangerous caboodle is put through an x-ray machine and disappears off into the never never land of the Erez military terminal, protecting the vulnerable Israelis from the dangerous people in Gaza.

We wander into the next room (each step is controlled by a locked door and it only opens when the light is green). There is a lot of meaningless waiting. I practice my slow relaxation breathing, but feel this slow restriction squeezing my chest. As we pass through the x-ray machine I realize I still have my money belt under my clothes but the security guy is fine with my holding it in my hand over my head, spread eagle during the x-ray. We pass through a series of small locked cubicles, each with the green light/red light thing and finally get to a larger area where we wait for our wandering luggage. More waiting.

It appears in dribs and drabs, everything has been opened and examined for the third time and horror of horrors, the incriminating za’atar has been discovered.  A security guy is clearly mad and lectures me about how this is forbidden.  Then he says, “Take this back to Gaza.” I am not sure I have heard him correctly but he makes it clear I have to go back through the terminal to the other side and return the offending spices to the dangerous Gazans on the other side. I argue that he has my passport and my IDs and how will I get back in? He says, “Don’t worry.”

So…. I go back to the area where people are attempting to enter into Gaza and start the maze of doors and turnstiles, feeling kind of naked and vulnerable without my passport and phone and shekels, when I come upon a Gazan family returning home and voila, the solution to my criminal activity.  I give the little boy the za’atar knowing it will soon be home.  The Israeli guy sees me do this and now is really pissed off and makes me take it back and of course it is now on a cart at the bottom of a pile of luggage.

I dig out the guilty egregious spice and continue my journey, wondering if I should take them up on their offer and just keep going. Earlier, having left Gaza without the thousands of people waiting for a permit for chemotherapy or their Fulbright or a visit to their dying grandmother, fills me with grief and a powerful sense of betrayal. But before I start down the long caged corridor a more friendly type intervenes, takes the bag and then just lays it down on a nearby chair.  I suggest he take it since it is really first rate and then I begin the re-entry process, nothing to check, no luggage, enter the x-ray area and…. They want to re-x-ray me. That is when I realize that I have put my money belt back under my clothes, but this time, there is no forgiveness and I am sent back to the luggage x- ray area where my lonely little money pack is placed in an enormous plastic case and sent off to x ray land.

I return to the body x-ray area and they insist on re-x-raying me, but each time, a disembodied female voice says, there is problem, do it again.  As I get increasingly agitated, I notice that two floors up there is a glassed-in area where command control lives and four soldiers are laughing and looking at their computers and staring down at me.

By the fifth time, I say no. “What are you looking for, five x-rays is too much.” That is when the voice snaps, “Repeat the x-ray or you go back to Gaza.” I think they are really serious.  I negotiate for only one more, but this process of do it again there is a problem/argument/re-x-ray is repeated a total of seven times before I “pass.”  The lowly security guard is looking sheepish, shrugging apologetically, “I’m sorry.” Even he is helpless in the face of the arrogant and ridiculous command control.

After the series of locked cubicles, I return to my friends and my disheveled luggage. I am questioned one more time about a plastic container, a fiber product. Angry voice, “What is this?” “This is for constipation to help you poop, a medicine, do you need some?” Everyone in the line is trying to explain the concept to the suspicious security agent, perhaps this is an orange flavored explosive? But finally he backs off and I reassemble everything and head to passport control  The glassed in lady is friendly, she has green nail polish with rows of sparkles at the tips.  We go through the usual: Why are you in Gaza? How many times? Where are you going? Do you have relatives in Israel? Do you have Israeli citizenship? How do you pronounce your name? When I tell her I am meeting my husband in Jerusalem she says, “I hope you can enjoy yourself now.” I reply, “Absolutely.” She smiles warmly and adds, “You know, it is never too late to make aliyah.”

“Aliyah? Are you kidding?” (Obviously a private communication.)

Sometimes it is really too late.