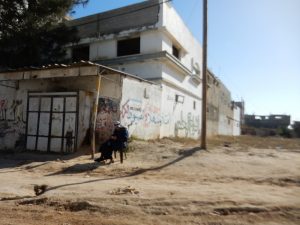 The goodbyes at Marna House are warm and heartfelt. Dr. Yasser presents us with gifts and there is talk of how important it is to the people living in Gaza that internationals come and offer support and witness. There is also the usual ritual of group photos, as if to say: Look, here is the documentation.  We Exist! We Live! We are more than war!

Alaa, one of the administrators, a high energy, very competent young woman with two children age two and four, a husband, a household to manage, a complicated job, and aspirations to get graduate education in international relations in the UK, takes us on a tour of northern Gaza. It is a beautiful sunny day. 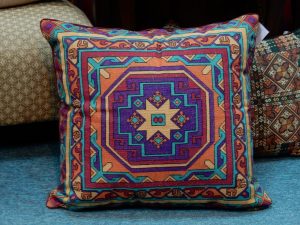 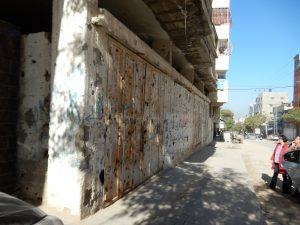 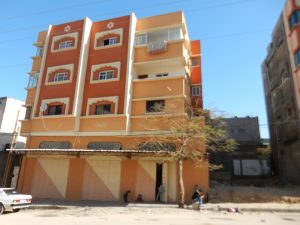 After a brief shopping spree for the gorgeous embroidery created at the Atfaluna School for the Deaf, we head towards Shejaia, a city that was bombed into oblivion in 2014, decimated in the last war with tens of thousands of people fleeing “like it was ’48”, running over dead bodies, body parts and a vast crumble of buildings, losing children and minds in the chaos and killing. 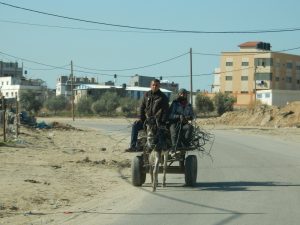 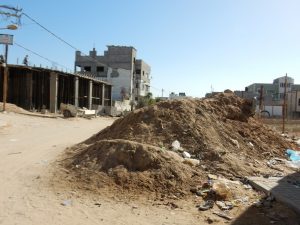 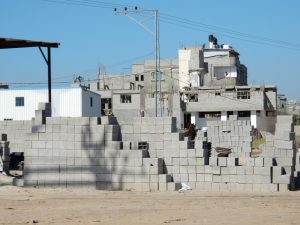 Donkeys and horses pull carts piled with huge lunar cauliflower, grasses for the Bedouin sheep, bags of cement and building materials, little children play in the streets. The big difference from my last trip in 2015 is that there is some reconstruction underway. Cement is more available and less expensive, but much of the building is being done with muscle and sweat, rather than sophisticated machinery. We see piles of concrete blocks, Gaza gold. 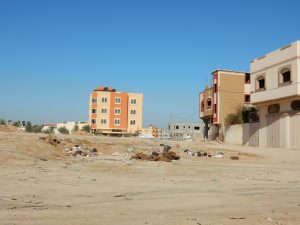 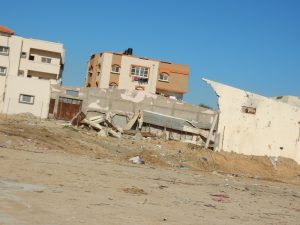 The rebuilt homes are painted a bright red, orange, or brown, someone’s idea of a tribute to recovery.  Alaa says the colors are just another trigger, a reminder of the horrors of war. The vast expanses of rubble have been cleared, some of the areas are now fields, others have buildings and factories in various states of repair and construction. 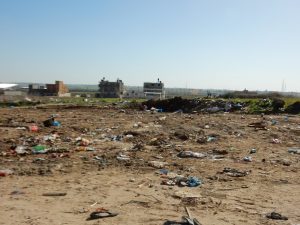 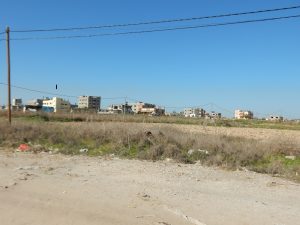 The UN supervises refugee homes, a Qatar foundation focuses on non-refugees and another organization is devoted to businesses and factories.  We drive by the bombed out crater of a chocolate factory, (a chocolate factory?) and other mostly food related industries including biscuits and Coca Cola. 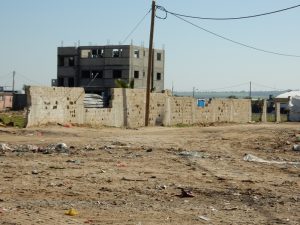 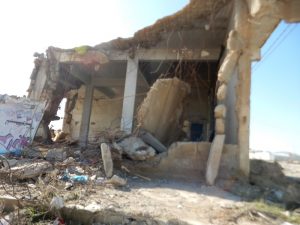 There are the familiar piles of tangled rebar that is straightened and reused. Alaa notes that “No matter how much they help, it is not like before.” Thousands of people lost all their possessions, photos, furniture, clothes and items like these are not included in the recovery budget. 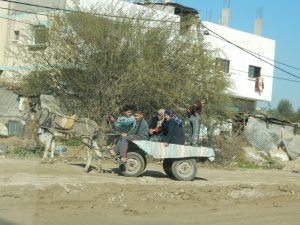 We pass a number of Bedouins and families: When people fled for safety to the UNRWA schools during the war and then were bombed and killed, many Bedouins arrived with their entire herds of sheep and goats. Conditions were horrific. Just seeing these awful scenes and hearing the stories, I am awash in a feeling of re-traumatization from my visit in 2015, and I did not even experience the actual war. Imagine what it is like for the people who did. We pass a built up checkpoint run by Islamic Jihad that monitors the neighborhood at night and keeps people safe. We pass a cluster of camels in a pen. For Alaa, these scenes bring back the smells of fire and war. In between the destruction are lovely olive groves, a testament to what was here before.  The road becomes much more rutted and muddy and we pass mountains of metal and burned out cars. With all the poverty and unemployment, child beggars are becoming an increasingly critical problem. The vehicles are a motley collection of battered over stuffed cars, donkey and horse carts, and various motor cycle style vehicles with creative carts to haul bundles of children or building materials. The taxi creeps along, trying to avoid the deep holes, and the dust that is begin to cover everything. 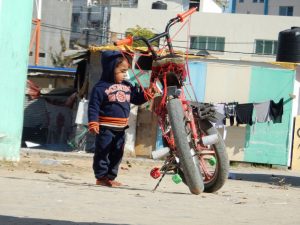 We turn to Beit Hanoun, also a disaster in the war, and the scenes are the same, some reconstruction or repair, some piles of bombed and shelled buildings, a badly damaged mosque.  Green Hamas flags hang in rows crisscrossing with red PFLP flags.  We stop to view a caravan neighborhood, Katrina style metal structures with inadequate water, electricity, heat, plumbing, housing large multigenerational families frozen in a postwar existence. A fruit seller drives by with a loud speaker: “Five kilos of apples for ten shekels.” 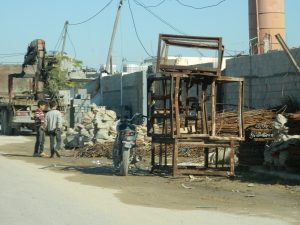 Alaa lives in this area and her memories of the war are triggered by the scenes she is sharing with us.  I feel my tears coming at any moment.  She talks about her near death experiences, (she was pregnant and with a small child), that life and death were uncertain and unpredictable; “It was all up to fate.” She is much more philosophical than I am, but that is clearly a survival mechanism.  I do not think a person can get up every morning and make coffee and feed the children and deal with the traffic and the on and off electricity with the level of pain and rage that is currently percolating in my soul.  She turns to the ongoing water crisis: 95% of Gaza water is not safe for drinking although much of the population cannot afford to do otherwise.  Her family buys a 250 liter tank of water that is supposed to be from an underground source and filtered but she has her doubts and worries for the health of her children. The erratic and unpredictable electricity has also affected her family’s rhythms. When she comes home from work, if there is no electricity, everyone goes to bed. Then at 9:00 pm or midnight or 3:00 am whenever the television suddenly springs to life, the family gets up, she makes dinner, does the laundry, the kids watch TV and play and then they go back to bed.  She explains that everyone is much happier with this plan. 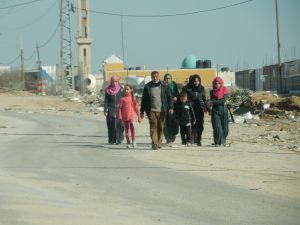 And much too soon, we reach the crossing into the alternative reality that is Israel.

For blogs on post war conditions in Gaza in 2015 please see:

Share this to:
previousHow will Israeli security be threatened if children drink clean water? January 10, 2017
nextGuilty by reason of zata’ar – January 11, 2017