According to a human rights worker I spoke with today, Israeli forces broke into a home in Nablus in the middle of last night, awakening the terrified family, argued with the screaming mother, and then shot her son five times. Dead. This is an extrajudicial assassination.  This will not appear in the news today and it is absent from my usual internet sites. Needless to say, this death does not get the attention and outrage it deserves because the victim is a Palestinian and this kind of killing is normal, commonplace, and thus not newsworthy.  Think about that.

Today is another sunny, ice cold day in Gaza that started with a not so sunny ice cold shower. I am pleased that we actually have water which is a privilege around these parts. A hotel staff person said I should just run the water and it will turn hot.  This seems immoral in a place with a severe water shortage but this morning I am feeling just desperate enough to try and so I let the water run and wash my critical areas with the cold water and wait a bit and wash some more until my conscience can no longer handle the extravagance of waiting, my feet are faintly blue, and I give up. 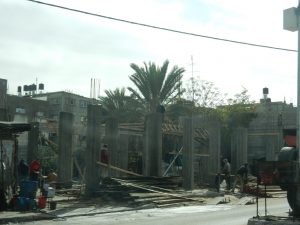 My translator whom I will call Beesan and I are soon heading south along the Mediterranean Sea for a women’s health session at the Wefaq Society for Women and Child Care in Rafa. I learn that she has been accepted to a program in Egypt to develop educational programs for refugees and today her father is going to the civil administration to apply for a permit.  She is very excited. The sea is fairly placid with gentle waves against the white sand. There are a scattering of fishing boats, some reconstruction from the severe bombing attacks, and lots of damaged and destroyed areas. We pass through several perfunctory Hamas checkpoints of questionable value. I think they are trying to give the impression that they are doing something but it is not quite clear to me what. My toes and fingers feel like blocks of ice. There are large posters selling coffee and Coca Cola which now has a franchise in Gaza.  How it got past the siege while items like sugar and flour and cement and medications were held back would make an interesting story about power and influence. 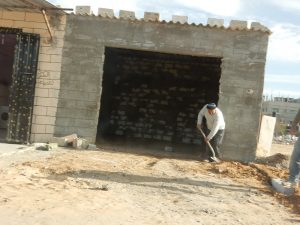 Rows of green cabbage appear in fields along the road and soon the smell of sewerage permeates the car as we pass an area where raw sewage flows into the sea. We pass resorts in various states of repair, the sites of former Jewish settlements, and ironic names like 4 Season Hotel. There are makeshift shelters of metal and cloth on the beach that people use during the summer. We see a UN school with a mural that is both historical and cartoon characters, long open stretches with no evidence of reconstruction from the war, clusters of young men on school vacation and rows of palm trees. Besan explains that Deir al Balah means Monastery of Palms. As we approach the Khan Yunis area, a red crane and slabs of concrete come into view, noticeable because that is a rare site.

We drive through further south, the area is becoming more rural, there are rows of onions and a green house, two branches of Ql Quds and Al Aqsa University, and an amusement park. I spot a large collection of cream colored apartments built by the Saudis and other smaller crowded housing developments.

We are now in Rafah where I can see some reconstruction from the utter devastation, but clearly no occupational safety measures, a rope dangles from a roof while workers hoist up large stone panels and buckets of material above the sidewalk, and there are many wheelbarrows and shovels and men carrying beams and materials, using sweat and muscle rather than modern machinery.

We locate the Wefaq center and sit down in an office area with Samaher Abu Zayed and another staff woman who does legal work. Samaher explains that Wefaq was developed as a support center for divorced women in need of psychosocial and legal support and awareness. They coordinated with the Sharia Court to open a family center so that children who are in the custody of their father can visit their mother in the center rather than at a police station. “We struggle to get legal representation with support from UNDP to get kids back to their mother and for alimony.” Their new project, Action Aid, works on advocacy, awareness, and partnership with Community Based Organizations (CBOs) in marginal areas to develop legal awareness for vulnerable women.

She describes an action where divorced women created two human chains in front of the Sharia Court in Rafah demanding access to legal rights. After much maneuvering by the powers that be to block the action, it was announced by loud speaker in front of the court and the women found this action very motivating, “to achieve something real with absence of legitimate council decisions, to say we want to change the legislative council, a first step.” The women felt very proud demanding their legal rights. “No more silence.”

Wefaq has initiated other legal initiatives against gender based violence. I understand that they created a kind of guerrilla theater using bicycles as symbols for gender discrimination since culturally women are not allowed to ride bikes.  She assures us that her daughter rides a bicycle. Samer talks of initiatives for widows’ legal rights and the creation of a “recreational day for emotional discharging.” They took over a resort in the middle of Gaza for 40 women to “swim in the pool, play, do ice breaking activities.” They wore shorts and shirts to swim. The women brought a daughter or a son. We laugh about how next time, maybe they will be wearing burkhinis. She notes that people live under continuous threat of “the next aggression” from Israel so everyone feels insecure all the time.

Their next goal is to work on reproductive health with the support of WHO. My mind immediately turns to contraception and reproductive control, but I am astonished by the immediate reply to my question: “What do you want?” The “biggest need is privacy during delivery.” There are shortages in primary care, no coordination between UNRWA and the Ministry of Health, the medical staff is primarily male, and there is an inadequate amount of postpartum care. They need more psychologists to provide awareness to women.  They are working on special tools for emergency situations, a Dignity Bag which contains sanitary pads, birth control pills, towels, and things women need in shelters. She notes that most women in Gaza do not have contraceptive awareness or control, birth control decisions are made by the husband and the family.

There is also a high rate of breast cancer in the south of Gaza, especially in the border areas.  No research has been done, but she suspects this is related to the environmental toxins, inappropriate use of fertility drugs, and genetics.   Many marry first cousins. Breast cancer is treated by removal of the breast; there is no plastic surgery, lumpectomy and radiation are not available (thanks to Israeli restrictions). Women with breast cancer also need more psychosocial support as they are often abandoned by their husbands.  Women are seen as “corrupted” when they get breast cancer, they are in essence blamed for the cancer.

We talk more about marriage and divorce and she explains that most people do not marry for love and that if the relationship fails, divorce is better than separation where women are “held up,” unable to have the benefits of marriage but unable to remarry. Men do this to their wives to force them to give up their legal rights and their access to their children. She explains, “I married for love,” and “anyone exposed to Western society is not really welcomed in Gaza.”

I take a deep sisterly breath and move to a larger conference room.  It is now time for the women’s health class and I am surprised to see a man sitting at the table with ten women and also one of the male staff I have met earlier who seems open minded and supportive also attending the session. I try joking about the presence of the unidentified man and I am quickly assured that he is a doctor.  I do not find this reassuring, but this is not my decision. The first woman to speak says she had a C section three weeks ago for a breech baby and returned to work after 18 days.  This is her second child and she is nursing. When I express shock at her quick return to work and admiration for her strength, she says she is okay, so we discuss postpartum, postoperative, and breast feeding advice and concerns. A 23 year old midwife who has just graduated talks about her unhappiness with her training, the lack of privacy and confidentiality, the big open wards, the short curtains between beds that provide little cover, the equipment shortages.  This unleashes a torrent of complaints from the group about the quality of care and the doctor keeps nodding in agreement. When we discuss prenatal and postnatal education, I learn that a woman’s mother is her main source of information, which is both good and bad.

Much of the discussion focuses on the extreme inadequacies of care and resources and the condescending attitudes of clinicians and the challenges of a conservative culture:  A woman with a pulmonary embolism sent home on heparin one day after her C section due to the lack of hospital beds, a woman with ten children and a husband suffering from hepatitis who cannot get a permit to obtain treatment and medications outside of Gaza.  The husband is dying and she has no resources. A woman with celiac disease who cannot afford the alternative flour and foods; although she has refugee status, these are not covered by UNRWA. A woman who has had irregular bleeding for two years, a medical workup and a doctor who has told her she is normal. The bleeding continues. She refuses to have a D&C because “I am not married.”  I suspect she may never have had a pelvic exam.

We talk a lot about the failures of the system, the possibility to crowd fund for smaller projects (like making longer curtains), and the inadequacies of small solutions. I sense that the presence of the men has affected the conversation, there is minimal emotional content besides frustration and despair.  At one point the doctor says that the high levels of domestic violence are due to the high levels of unemployment and the extreme demands of the wife. No one challenges him. 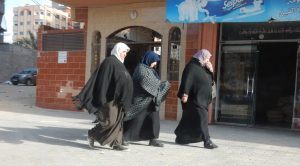 Much to soon it is time to drive to our next women’s center and another health session in the middle area of Gaza.

Share this to:
previousTrauma and shame: Women struggle for gender justice – January 9, 2017
nextAt least let me do your eyebrows – January 10, 2017