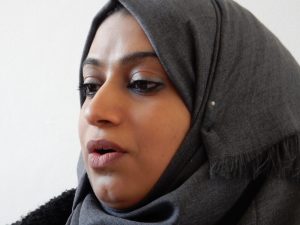 The next stop is at the Hayat Multipurpose Center, Project for the Protection and Empowerment of Women and Families, Center for Women’s Legal Research and Consulting.  My interpreter and I join a sociologist named Linda and a psychologist named Sara and an administrative assistant named Doaa for introductions and the usual Arabic coffee.  Linda explains that the center does research about women and gender violence and works to mediate problems between husbands and wives before they reach the court system. Funded by the UN, they have a psychological and social unit to empower family relationships, they offer free legal support, mediate when children are divided between parents who are separated or divorced, and they are thinking of developing a shelter for abused women.  They talk about the problems that occur when a woman demands her inheritance and she is threatened by her family (often brothers and uncles) who want to deny her and become abusive and threatening. Or the married woman who is kicked out by her husband, unsupported by his or her family, and in desperate need. The center’s goal is to mediate and provide support and solutions for the whole family.  Not an easy task, particularly in a conservative, patriarchal society. 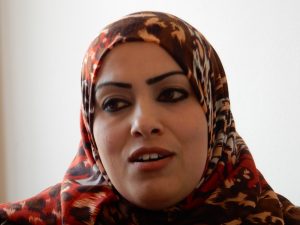 Sara continues as we sit, bundled up against the winter cold, when the coffee, orange juice, and PopKeks arrive in bright plastic wrappings, part of the social ritual everywhere we go. Another focus of the center is to work with families struggling to cope with mothers who were disabled in the last war and are no longer able to perform their maternal and household roles. There is also a program of micro-financing for women’s projects, hair dressers, salons, gyms, embroidery for wedding dresses, studios for wedding photography, (a delicate issue given the rules of the society, the gorgeous sugar plum fairy type wedding dresses and elaborate coifs and the need for the bride to be covered in front of unrelated men). They also work with women recently released from local Hamas prisons (for drug offenses, for instance) as well as with women who are currently inside the miserable prisons with no fans in the summer, no heat in the winter, inadequate food, etc.

And then there is the forbidden topic of sexual harassment of children.  Mothers come to the center saying their daughters have been raped by a cousin, uncle, father… and they are desperately in need of healthy interventions, particularly in a traditional society where loss of virginity, family shaming, and honor killings are still a problem.  Rarely the mother asks for an attorney, usually the request is for psychological intervention.  They discussed a violent rape case two weeks ago that went viral on social media, an eight year old girl from Shejaia (a heavily bombed city in the north in 2014) was raped and severely injured by an 18 year old neighbor. The boy was arrested and the family has alleged that if the courts do not punish him, they may take justice in their own hands. This is what happens when there is no functional civil society and no adequate working legal system.

Another rape case from a year ago has recently come to light because the child is seeking care.  A nine year old was brought to the center severely psychologically damaged, appeals were made on the radio, but the rapist has never been caught. 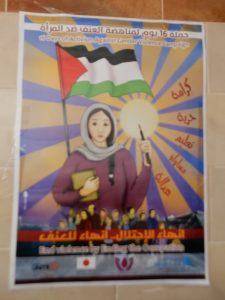 I take a very deep breath and head upstairs to a living room like setting where I am meeting six more women who have come for a health discussion. Again, I am respecting their privacy and the confidentiality of the discussions.  They range in age from early thirties to late forties and everyone looks older than I expect. Chronic stress does that. I am also impressed by how fashionable women can be with just a scarf and makeup to play with.

One woman has severe menstrual cramps and is unable to work for days, sometimes fainting from thepain.  When we review the possible diagnoses and treatment, the women smile and give me a funny look.  It seems that although birth control pills are likely to give her significant relief, because this lady is unmarried, it would be impossible in this society for her to ask a doctor or a pharmacist for the medication, there would be gossip, and a possible threat to her reputation.  We have a long talk about the culture and the limits it places on medical care, but this seems to be an absolute impossibility, so we talk options and take deep sympathetic breaths.  Another lady clearly has eczema and is afraid to use hydrocortisone, another woman had a thyroid removed for cancer eight years ago, but then had an early menopause five years ago.  We talk menopause, (one of my favorite topics). An older woman comes with pages of medical reports, her 19 year old son is very short and from what I can understand has a growth hormone deficiency and no sperm (yes he did have a biopsy of his testicles which I see a lot and cringe). What can she do?  She has applied for a permit to go to a hospital in Israel. They are still waiting.

The most painful conversation occurs around a woman who wants to know about the hymen and then says her daughter had an “accident” which on further discussion was really a rape by a 15 year old neighbor. The mother wants to know if the hymen can be reconstructed and will she be a virgin again. Even my unmarried translator is blushing, but many of the women have opinions for this lady and they are all contradictory. Clearly the mother feels her daughter is “damaged” and potentially unmarriageable although she is struggling to be supportive to her child and to avoid condemning her.  Additionally the father is dead and no one else in the family knows; in fact it would be a disaster if anyone found out, so this is also a big painful secret. I can see the shame in her eyes, the fears about her daughter’s future, her fears about families taking revenge.  We talk about the meaning of virginity, blaming the victim, psychological healing, the long term damage created by family secrets and shame, the retraumatization that could occur if some gynecologist tried to “fix” her. I urge her and her daughter to begin psychological counseling, to begin the healing process.  At the end she looks sadly at me and says, “How can we change the society?”

One woman stays after everyone leaves and in broken English looks at me and declares with desperation, “I need a job, can you help me? Talk to your universities?” She is smart and has had some education in the field of multi-media and wants to complete her university studies.  She is divorced and her husband has their two daughters.  She wants to be a good mother; she wants to be able to provide them with what they need.  She doesn’t want to be dependent, living with her mother and her sister. She wants a good life for herself.  The words pour out of her. So I listen and we talk and once again, I am filled with an overwhelming feeling of inadequacy and outraged by the levels of struggle and injustice that these brave women face in this most difficult of places.