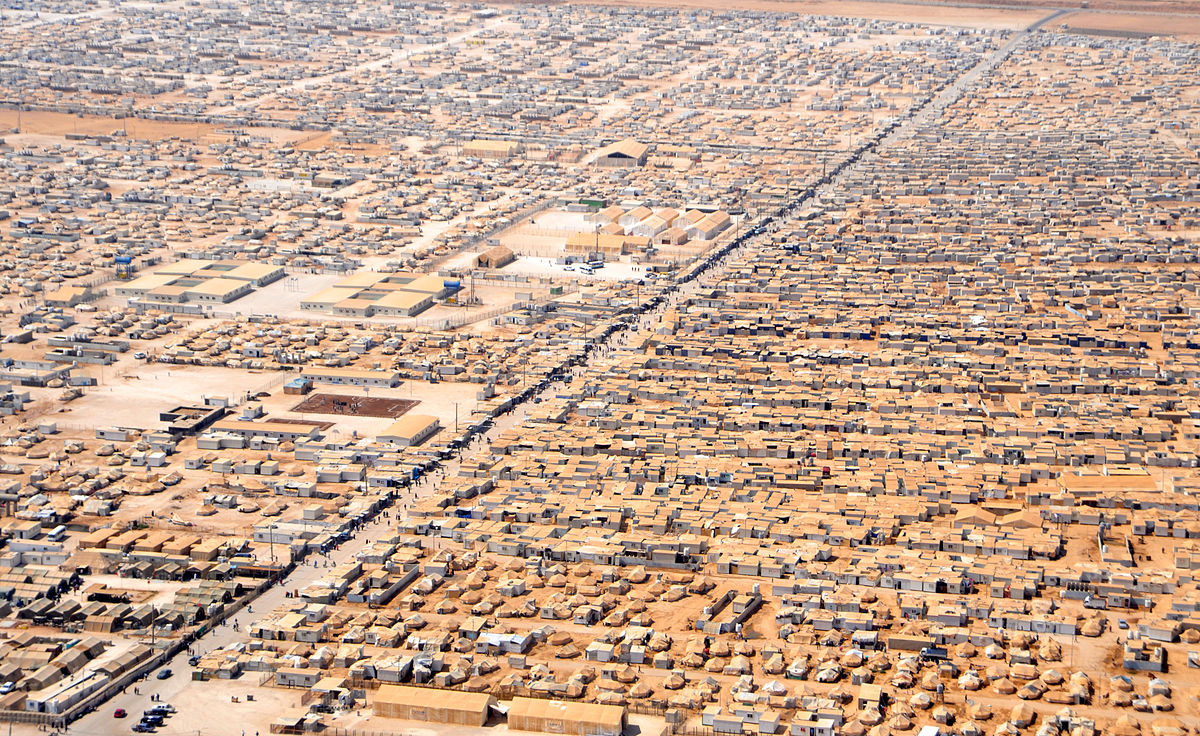 In late March and early April 2019 I traveled to Jordan and the West Bank (Palestine) with two colleagues, Sonia Dettman and S. Komarovsky, first to attend the Lancet Palestine Health Alliance conference in Amman and then to explore and better understand the lives of refugees and the workings of UNRWA, with a focus on the status of refugee health.

We leave the Collaborative Repair Project and drive north to Mafraq, near the Syrian border. A highway sign catches my attention as it points in the various directions we might go: Iraq, Syria, Saudi Arabia. We are definitely not in Kansas anymore.

We zoom through rolling, barren desert hills, a palette of mottled yellow and brown, pass universities, a stretch of buildings once used for military housing, concrete factories. Lights twinkle on the horizon. Over an hour later, as the sun sets we reach Mafraq, a sprawling, bustling city with many poor neighborhoods and we are told, a cross roads for drugs from Jordan’s neighbors.

We have come to meet Reverend Nour Sahawneh at his Mafraq Christian and Missionary Alliance Church. As we settle into his office, he tells us we are 15 kilometers from Syria. There are 80,000 Syrian refugees living nearby in the Zata’ari camp, now one of the largest “cities” in Jordan, just east of Mafraq. He says there are 100,000 more Syrian refugees in Mafraq and 40-50,000 in nearby villages. The city tripled in size due to the influx with the onset of the Syrian civil war. The United Nations High Commissioner for Refugees (UNHCR) approximates that 670,000 registered Syrian refugees live in Jordan, as of March 2019. While most reside in cities and towns, around 17 percent live in three refugee camps—Azraq, Zaatari, and the Emirati. A further 41,000 live in ramshackle unofficial camps splayed across the isolated desert in northeastern Jordan near the borders with Iraq and Syria, known as the Rukban.

To keep this in perspective, according to UNHCR, Jordan has the “second highest share of refugees compared to its population in the world, 89 refugees per 1,000 inhabitants.” Lebanon tops that list with 209 refugees per 1,000 inhabitants and the US sinks towards the bottom with 0.84 reported in 2015. With a population of 327,000,000, the US (in all its racist and xenophobic wisdom) has set a refugee limit for 2019 of 30,000. Do the math.

In the three square miles of Zata’ari camp, 20% of the families are headed by women, more than half of the population is under 24, and 20% of the population is under five. UNHCR estimates that 6,500 refugees work for cash inside the camp and 9,000 refugees have work permits and are able to work outside the camp. There are 21,400 children enrolled in 29 schools. In 2017 there was a dramatic improvement in the camp when 40,000 photovoltaic panels were installed, providing electricity 12-14 hours per day. The Jordanian government partners with a host of governmental organizations and NGOs including international, church, and UN based, to provide services to the camp residents.

We sit in Rev. Nour’s crowded office with shelves loaded with jumbles of papers, panels of security cameras, awards, and posters. He was born in Jericho in 1965, and fled with his family in 1967. He tells us that he has a son who is a freshman in university, a daughter studying pharmacy, one studying civil engineering, and one daughter in the ninth grade. His wife was a lab tech and manager and is now retired.

In Mafraq the church has focused on refugee aid in the city and in two villages. Their efforts started in 2011 with 300 people, but then the numbers exploded; many Syrians are stuck here and afraid to go back. All the refugees are Muslims. Relief includes:

Food packages to 400-500 families per month, costing $35 each, consisting of rice, lentils, oil, etc.
A welcoming kit with items for eating, cooking, sleeping, like cooking stoves and mattresses. The church has supplied 9,000 families, goes to door-to-door assessing what each family needs. The cost is $300 per family and the church uses warehouses storing relief supplies.
In winter they supply 4-5,000 families with a gas heater, gas coupons, etc. at a cost of $200 per family.
Supplies of milk, diapers, eyeglasses.
Connections for patients with hospitals.

Rev. Nour tells us that Syrians are no longer coming to Jordan and those who have returned home are full of regret. The Jordanian border was closed due to the threat of ISIS, but now the border is open again, though few Syrians are able to get in due to security issues. Some leave the camps to find work in the city. Many work, including children, under-the-table, paid below minimum wage, in the agricultural sector, as Al Jazeera reported.

Funding for this relief work comes from the Christian and Missionary Alliance Church, which was started in the US in 1881. Their suppliers are mostly local, some sent by church organizations. They receive money and in-kind donations as well. Initially the US church sent missionaries to Jerusalem, the West Bank, and Jordan. Then in 1948 Mafraq started a Bible study group that grew into the church which is now also a multipurpose building, currently under renovation.

The community center sponsors English programs, sewing and handicraft training, and trauma meetings for women. Rev. Nour explains that there is no counselor; the women do not talk much about their own trauma but “mostly work on forgiveness.”

He explains that in the refugee camp we would see an expanse of cream-colored caravans stretching in every direction, crisscrossed by rocky, dry dirt streets, a hospital, schools, and markets, run by groups such as the United Nations High Commission on Refugees (UNHCR) with the Jordanian government. There is a collaborative effort between Jordan and “the donor community, UN agencies, international and national NGOs, community based organizations, refugees and host communities.” This includes local Islamic organizations and mosques.

Refugees are able to obtain IDs but not citizenship, and they are able to work. Rev. Nour believes that Jesus heals but clearly there are major unmet challenges in this physical world. The Syrians in Mafraq are mostly from villages, they are Bedouins and, “Hide when asking for help.” When the Muslims enter the church building, their kids play in the playground, the parents register for services, and drink tea. They are treated with respect. That is the beginning of building a relationship.

Many of the households are headed by single mothers. The husbands have disappeared, have died, or are fighting. The husband may also have taken a second wife. There is an average of five children per family, no birth control, and a general lack of education. In the family, men are in control.

Rev. Nour notes that the refugees are victims of war and displacement and are “victims of themselves.” Many marry at less than 18 years old, with girls sometimes as young as 13 or 14. Many do not have legal papers in Jordan. “Their lives are a disaster. They are a tool of war. They became a subject in a war, not a people to help.”

We meet the international volunteers who staff the church programs; Rev. Nour says he is “fully pastoring the mission and the church.” There is a Friday church service for people from India, Nepal, and Sri Lanka who are working in nearby factories. He notes that 30% of factory workers are non-Jordanians who are paid less than Jordanian citizens, live in compounds, and are recruited by manufacturers, much like Mexican migrant workers in the US. Construction workers are also Egyptians who make money and then return home. He explains that garbage collectors are Egyptian and Syrian; Jordanians won’t do this type of work. Palestinian Jordanians are often businessmen. He describes this as a “tribal effect…who will marry me if I collect the garbage?” There is also a big focus on getting an education and going to university.

When we ask, “How will this all end?” Rev. Nour explains that there are one million Syrian refugees (documented and undocumented) waiting for a resolution. He says that Syrians are hard-working, there is a big market in the camp ironically called the Champs Elysees, where in 3,000 shops and businesses refugees sell gold, mobile phones, refrigerators, vegetables, falafel, everything, as well as run restaurants. He describes this as a tribute to Syrian entrepreneurship and determination. At the same time, the camp is a haven for drug and weapon smuggling. “War is business.” He adds that Syria is a lab for Russian weapons. He nods and explains, as the Bible says, “Love of money is the root of all problems.” In all the Arab countries, he sees a battle for control and revenge, proxy wars and shattered societies, rich countries reduced to extreme poverty, and civilians caught in the catastrophe.

Share this to:
previousFor Iraqi refugees in Amman, kindness, support and an application to Australia – May 9, 2019
nextUNRWA: A critical but impossible mission – May 21, 2019