A hierarchy of vulnerability – February 1, 2020 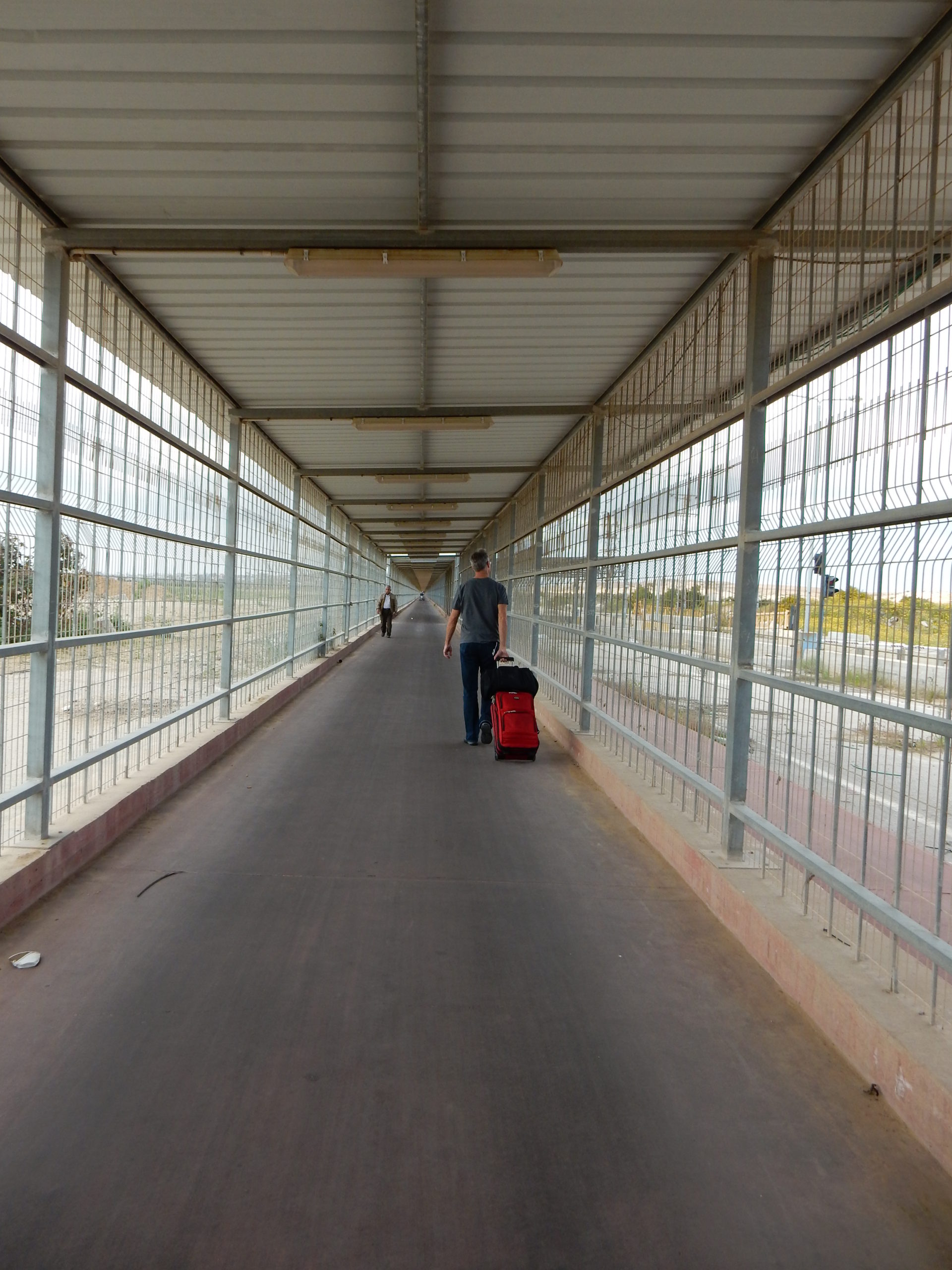 I was recently passing through customs where I popped my US passport face down on a little machine which then opened a gate that led to two yellow footprints in the next compartment. I placed my feet on the footprints, faced the camera, tried to look like my friendly passport photo, and bam, the next gate opened and I was in. It occurred to me that this is both reassuring and creepy. The fact that I have “papers” means that I officially exist, that I am recognized on this planet as a human with some value and protections. Someone in officialdom (not to mention my husband and daughters) will notice if I disappear.

The fact that surveillance systems (at least in the First World), all recognize my passport and my face, can check the criminal history/no fly/terrorist watch list in two seconds flat, and come back “All good,” is actually frightening. As you are probably increasingly aware, between our i-phones, social media, public surveillance cameras, credit card history, and every airport we breeze through or wait for hours, our existence, buying habits, and locations are being closely watched and recorded.

International travel easily provokes some serious thinking about borders and freedom of movement. For me it was an ample opportunity to observe and ponder my first world privileges and the insanities and cruelties that pass for borders and the institutions that create and guard them. I am also old enough to wonder, how did we lose the privacy that we used to take for granted? Or maybe didn’t even know we had, until it was lost.

This problem, however, is ironically a privilege that is only available for people with papers and appropriate documentation. I face the exigencies of travel armed with old fashioned paper books, and the most relevant book I read on the issue of borders was Francisco Cantu’s The Line Becomes a River, Dispatches from the Border. Cantu wrote eloquently of his experiences as a US border patrol agent, his realization that there are no “good” border guards (or soldiers at checkpoints for that matter), when the institutions themselves are corrupted. Borders are imposed political boundaries that reflect states of war, conquest, and colonialism. Migrants and asylum seekers (to clarify: mothers, fathers, children, farmers, teachers, churchgoing Christians, unemployed hungry teenagers, etc.), attempting to cross said borders without “papers” are dehumanized by the militarization of the security institutions, reduced merely to numbers, “wetbacks,” often just skeletons lost in the desert. Even death is no longer counted when the human being lying in the sand or the holding cell has no documentation besides the fact of their existence.

This led me to reflect more seriously on the “borders” with which I have the most familiarity, in Israel, East Jerusalem, the West Bank, and Gaza. Over the past twenty years, I have seen many of those “borders” morph into military installations with the potential for intensive scrutiny and control. This is further complicated by the fact that the State of Israel does not have internationally-accepted and agreed upon borders and even the language describing the land and its legal status is disputed.

The Mediterranean Sea is an obvious boundary that delineates the western portion of the country. Landing in Ben Gurion Airport south of Tel Aviv is an easy entry point for folks the state deems to be acceptable, from happy young adults on Birthright trips to respectable Israel-loving tourists to Christians in search of Jesus and a spiritual moment walking the sacred stones of Jerusalem. But (in my personal experience) there is also a high degree of surveillance that zeros in on travelers who are Muslims, Arabs, Palestinians who have passports from other countries, human rights activists, and supporters of the boycott, divestment, and sanction movement (BDS).

There is also the question of the passport history, i.e., it must be “clean.” The last time I visited Lebanon I had to have a separate unused passport so that neither Lebanon nor Israel knew where I had been. The kinds of folks that are pulled aside are often subjected to hours of hostile questioning, repeated combing through and x-raying of the luggage, demeaning body searches (including strip searches), and if all does not go well, some time in detention while deportation and a ticket home is arranged.

When it comes to papers, in East Jerusalem, which is part of the “eternally united capital of Israel” according to the Israeli government and “occupied territory” according to international law, the Palestinian people living there carry an East Jerusalem residency card. This can be easily rescinded by the authorities in response to a long and constantly changing list of accusations that include lack of loyalty to the State of Israel, or living, studying, or working abroad for some unclear amount of time. East Jerusalemites are also subjected to increasing amounts of mass surveillance, facial recognition, and monitoring of social media. That is also true of Palestinian citizens of Israel. (See the 2018 conviction of Dareen Tatour, an Israeli citizen living near Nazareth, for a poem and social media post.)

Entering Gaza or the West Bank (Judea and Samaria per the Israeli government) is even more byzantine. It is almost impossible to obtain permission from COGAT (Coordinator of Government Activities in the Territories) to cross the Erez checkpoint (a massive military installation) and walk the ¾ mile caged corridor across the no man’s land that is the northern perimeter of Gaza. This is true whether you are trying to get in like me (bringing medical aid and expertise, humanitarian assistance, or journalistic investigations) or out (seeking work, healthcare, university studies, or a visit to your dying grandmother in Hebron).

Access to the West Bank largely depends on who you are and where you are going. The West Bank is divided into three areas with different rules. Jewish Israeli settlers (mostly living in Area C) easily enter on bypass roads, major highways that connect Jewish settlements with each other and with the state within the 1948 armistice line. Israeli citizens are forbidden to enter Area A (Palestinian cities), although human rights activist types often do. Foreign visitors are less restricted but it is best not to mention your intention to visit the region when trying to get into Israel proper, often referred to as ‘48.

For Palestinians living in the West Bank, life is more complicated, restricted by permitting requirements that curtail movement within the occupied territories (and a host of other things like digging a well, building a home, harvesting olives on family land, etc.). There are also restrictions on their ability to leave, which they are required to do via Jordan. The occupied territories is also constrained by the massive Israeli surveillance industry where the latest in internet and social media trawling, language analysis, avatar creation, etc, is tested and used. Biometric data is clearly the new frontier and Israeli and global corporations are eager to do business “in the field.” There is reportedly a network of over 1700 cameras across the occupied territories, perhaps using the same kinds of technology that let me enter foreign countries with a nod and a smile.

As Trump announces new travel bans and further restricts Palestinians in the West Bank with his bogus “plan of the century,” in the world of citizenship, visas, and permits clearly there is a hierarchy of vulnerability, who gets into which fortress, who is left banging on the doors, who is trapped in an increasingly impoverished ghetto. Having papers is both an opportunity and a marker in our increasingly surveilled world. At the same time, we do know that migration (considered “legal” and/or “illegal”) is part of our human history and is only going to increase with rising temperatures, droughts, water and food shortages, and economic catastrophes. While data shows that refugees, migrants, and asylum seekers largely contribute to and enrich the societies they join, in our Trumpian universe their value and humanity is demeaned and demonized.

Which brings me back to Francisco Cantu. He wrote,

“Possessing freedom of movement frees us from the burden of a migrant identity, frees us from the fear that our lives might become defined by undocumented-ness and pervaded by the constant threat of arrest, deportation, and anonymity.”

On the other hand, having freedom of movement is a privilege that is fraught with modern dangers in the context of ever expanding state and global surveillance. Think about this the next time you wave your passport at some anonymous globally interconnected little box or stand with protesters opposing Trump’s wall, monitored by cameras that have become a “normal” part of our environment. As we examine all these systems of control, we must remember that our first loyalties must be to human life and not to the inhuman institutions that currently dominate the world in which we live.