Trump’s ‘Deal of the Century’ is a flawed, ahistorical plan with major health consequences – February 27, 2020 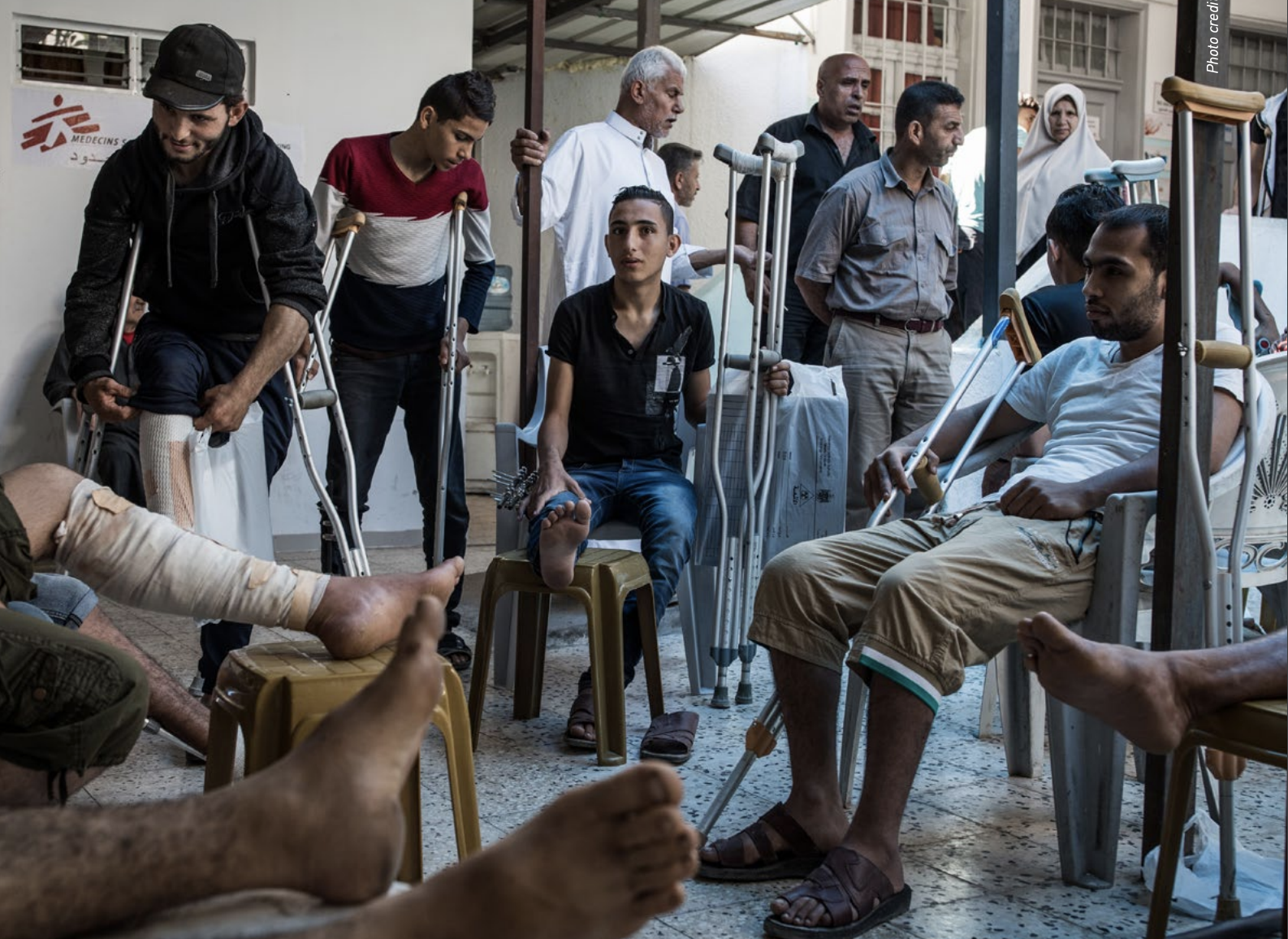 Patients at the MSF clinic in Gaza (Photo: Doctors Without Borders/Médecins Sans Frontières)

The Trump administration plan for Israel/Palestine, ironically titled “Peace to Prosperity: a vision to improve the lives of the Palestinian and Israeli people,” is a flawed, ahistorical document that is basically a gift to the Israeli government, affirming and giving international blessings to much of the status quo. The document is framed in classic Israeli hasbara: Israelis are peace loving, Palestinians are plagued by violence and terrorism. The struggle is described as intractable, a clash of religions and cultures, that can only be solved by ignoring history and international law and proposing technocratic solutions to political problems and issues of social justice.

The release of the plan coincided with snarky comments from its authors clearly involving attempts to belittle Palestinians – White House senior advisor Jared Kushner told CNN, if Palestinians reject the plan, “they’re going to screw up another opportunity like they’ve screwed up every other opportunity that they’ve ever had in their existence.” He also said on PBS, “Look, they played the victimhood card. Now, it’s like they want their rights. They want a state[…]Basically what we’re saying to the Palestinians is put up or shut up.”

Meanwhile, in Gaza the health system is on the verge of collapse. Unemployment has reached nearly 50 percent, the per-person ratio of doctors and nurses has dropped, more than two-thirds of households are food insecure, and just three percent of Gaza’s aquifer water is safe to drink, according to official statistics and aid agencies.

More than 400,000 university graduates are unemployed. Seventy percent of those under age 30 cannot find work. Back in 2016 Sara Roy of Harvard University’s Centre for Middle Eastern studies warned, “innocent human beings, most of them young, are slowly being poisoned by the water they drink and likely by the soil in which they plant, all with the knowledge and acquiescence of the world community.” Water is contaminated by sewage, salinization, bacteria, and military contamination. In Gaza this is especially acute for the victims of sniper fire. Bone and tissue biopsies have shown that 83 percent of patients seen by Medicine Sans Frontier in Gaza have infections. “Of those with infections, 62% have multi-resistant organisms like MRSA (methicillin-resistant staph aureus).” Many doctors have left for well-paying jobs abroad. Medicines, medical supplies and equipment are in short supply. Many of the thousands of people who have been injured by gunshot wounds (while exercising free speech) are at risk of losing limbs, “because the surgeons, medications and supplies needed to prevent amputations are unavailable.” There is no need to “play the victimhood card,” when two million people are objectively victims of collective punishment and a brutal siege.

Another Trump administration strategy is to bully Palestinian leadership into submission, from defunding the United Nations Relief and Works Agency for Palestine Refugees in the Near East (UNRWA) which supplies care to millions of Palestinian refugees, to removing support for a major tertiary care hospital in East Jerusalem. Trump also recently stopped all USAID funding to the West Bank and Gaza. UNRWA clinics in the past few years have made major strides with family-based health teams, cooperation within team groups, the use of e-health medical records, the focus on pregnancy and pre and post-natal care and non-infectious chronic diseases such as diabetes and hypertension and dental care. Nonetheless, physicians see 70-150 patients per day with two to four-minute visits, there are increasing shortages of medications and a very bureaucratic and inadequately funded system. (Non-emergency cases, like hernia repair, are not covered by UNRWA). Refugee, as well as non-refugee patients in the occupied territories, face a mushrooming fragmentation of their health care “non-system” with care provided by UNRWA, the Ministry of Health, NGOs, and private clinicians with duplications, gaps, and chaos complicated by the priorities of international aid groups and donor agendas.

Other countries and institutions are attempting to close the financial shortfall. The 2018 and 2019 budgets for UNRWA were $1.2 billion for their work in the occupied Palestinian territories, Lebanon, Syria, and Jordan. With the $500 million in Trump budget cuts, UNRWA launched the #Dignityispriceless campaign to raise money for health and education. Gulf States provided $200 million for essential services and the EU and Saudis provided funding to upgrade buildings that are often dilapidated and desperately in need of renovation and repair. Japan committed approximately $11.15 million for food assistance and a school for 1,000 students in Gaza, and a sewer system in the West Bank. Despite the Emergency Appeal for the West Bank and Gaza, UNRWA was forced to downgrade programs like community mental health and mobile clinics. UNRWA is also responsible for water and sewer infrastructure in the refugee camps, but the funding has not kept up with population growth.

For 2020, UNRWA has called for at least $1.4 billion for essential services and assistance for projects across the Middle East. Beyond Israel/Palestine, they face daunting needs in Syria, a political crisis in Lebanon, and increasing demands in Jordan. “Many of the 5.6 million registered Palestinian refugees live in 58 camps across the Middle East,” and under international law they are entitled to certain rights such as decent health care, housing, and education.

The World Bank has also stepped in with a new grant of $9 million “to improve Palestinian early childhood development. The project will expand coverage and quality of services for Palestinian children from gestation until age five.” Predictions by the 2018 Human Capital Index reveal that “a Palestinian child born today will only be 55 percent as productive when she grows up as she could be if she enjoyed complete education and full health.” The project will support prenatal care for pregnant women, adequate child nutrition and growth monitoring, as well as early learning opportunities that are crucial to a child’s development.

In the West Bank and East Jerusalem, the U.S. has officially sanctioned the growth of Jewish settlements with the rush of land grabs as Jewish settlers grow ever more aggressive and the very existence and rights of refugees are questioned. This creates rising levels of poverty, depression, and hopelessness while Israeli attacks continue along with increased levels of resistance and militancy. This produces a steady rise of mostly young men injured and killed by Israeli guns and a stressed health care system unable to meet the escalating needs.

In addition, public health threats are mounting, from the lack of potable water and massive environmental contamination from military detritus and Israeli spraying of pesticides in Gaza, to the lack of drinking and agricultural water, pollution from settlements and unregulated industrial zones, and severe restrictions in movement and access in the West Bank.

In the Trump/Kushner plan, there is no recognition of the Nakba, (Catastrophe) – the Palestinian experience of the 1948 Arab/Israeli War, scant mention of the realities of ethnic cleansing, settler colonialism, occupation, siege, or Israeli aggression and duplicity. Oslo failed because of “waves of terror and violence.” Palestinian refugees are mentioned in passing as “pawns” of the powers that be. They are also discussed as the other half of the Jewish refugee problem, an apparent attempt to balance these issues and vaguely hint at the benighted idea that in 1948 a refugee exchange occurred, thus taking this pressing concern off the table. The plan notes, “The Arab-Israeli conflict created both a Palestinian and Jewish refugee problem.” Gaza is described as “a very complicated situation,” the humanitarian crisis solely due to Hamas and its violence and corruption. The views on Jerusalem, (“The State of Israel has been a good custodian of Jerusalem. During Israel’s stewardship, it has kept Jerusalem open and secure.”) can only be described as alternative and perhaps delusional facts. Claiming that Israel has “already withdrawn from at least 88% of the territory it captured in 1967,” must mean that Kushner is counting the Sinai in his calculations, which is not particularly relevant to this conversation.

While there is language in the proposal that acknowledges the yearning of Palestinians for self-determination and a better future, and phrases like, “Peace should not demand the uprooting of people – Arab or Jew – from their homes,” the underlying message is clear. Israeli expansionist and security concerns are paramount, the Jewish settlements in East Jerusalem and the West Bank will remain, the new truncated, mini State of Palestine will be demilitarized and fragmented, the lack of territorial contiguity will be solved by “pragmatic transportation solutions,” “transportation corridors,” and other sleights of hand. Everything will be fine if Palestinians stop resisting, Israel retains massive military and economic superiority, is allowed to continue to expand its borders, and the international community pours billions into the region. Refugee compensation is dismissed in favor of economic assistance. Palestinians must give up their “culture of incitement.” And so on. There is no mention of Israeli culpability or vast military superiority and aggression. Why ever would this be acceptable to Palestinians and their leadership, however damaged that leadership may be?

The utter failure to resolve these issues, to end the occupation and siege, to contain the rightward swing of Israeli politics, to recognize the political and human rights of Palestinians, will be part of Trump’s sordid legacy. An emasculated mini-state is not the answer to these life and death matters.

This plan cannot possibly be supported by those who care about a viable future for Israelis and Palestinians and by those who understand the realities on the ground. In this time of rising autocrats, fascistic and racist policies, and profound disinformation, governments and their institutions are failing. The need to be educated about this crucial corner of the Middle East and to support a strong boycott, divestment, and sanction campaign to create political and economic pressure and to challenge the current discourse is ever more acute.

Share this to:
previousA hierarchy of vulnerability – February 1, 2020
nextCoronavirus: A good argument for Medicare for All – March 18, 2020