‘NYT’ coverage of happy boars of Haifa is just another way to ignore settlers’ crimes – April 11, 2021 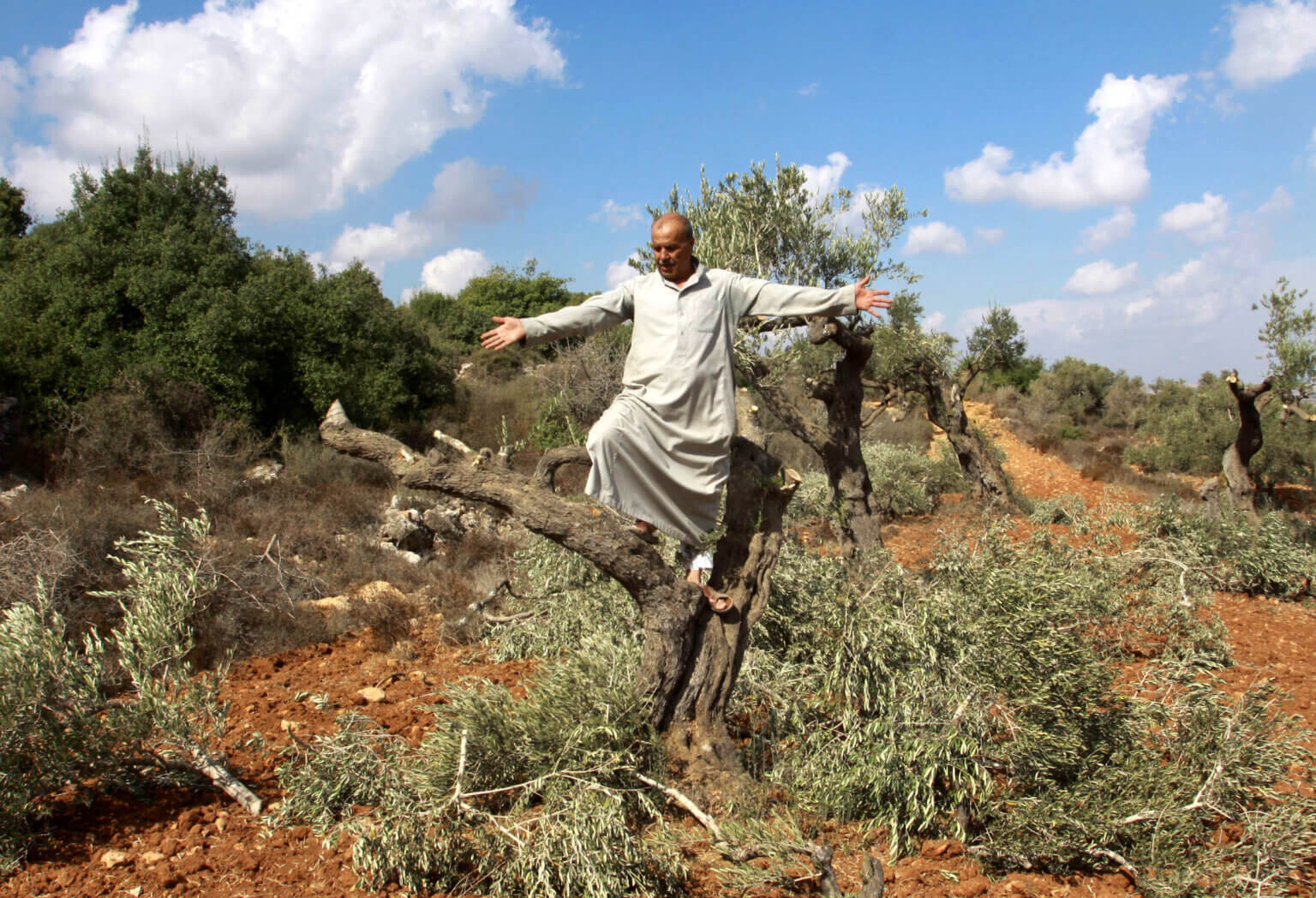 A PALESTINIAN FARMER FROM THE VILLAGE OF QARYUT INSPECTS THE REMAINS OF HIS OLIVE TREES ON OCTOBER 9, 2012, AFTER AFTER THEY WERE UPROOTED OVERNIGHT, NEAR THE NORTHERN WEST BANK CITY OF NABLUS, IN AN ATTACK BLAMED ON JEWISH SETTLERS FROM THE NEIGHBOURING. PHOTO BY NEDAL ESHTAYAH. COPYRIGHT APA IMAGES.

On April 9, 2021 The New York Times published a half tongue-in-cheek, half serious article titled “Where Boars Hog the Streets” by Patrick Kingsley. It opens with a photo of a large mama boar crossing a Haifa street with eight baby boars and a waiting driver laughing. This is not a laughing manner on so many fronts.

While the wild pigs can weigh up to 300 pounds, in this article they are described as having “sparked a rumpus,” (rumpus being a word I generally associate with unruly kids at a playground). The boars are portrayed in a variety of manners: harmless like squirrels all the way to dangerous pests gobbling up lawns and rooting through garbage, but the visuals are all cuteness. The author soon lapses into the realm of political hasbara. “[Haifa] is one of the few Israeli cities where Jews live alongside significant numbers of Palestinian citizens of Israel, who form about 10 percent of the city’s population.” He quotes Edna Gorney, a poet, ecologist and lecturer at the University of Haifa. “‘I wish we could all in Israel learn to live like they live in Haifa, it’s an example of coexistence — not only between Arabs and Jews, but also between humans and wildlife.’”

Why does this trouble me so much? The last time I saw boars in Israel/Palestine, Jewish settlers were releasing them onto Palestinian agricultural lands where they caused a huge amount of destruction and were virtually impossible to control. In the village of Burin near Nablus, during a visit with Palestinian Medical Relief Society, villagers complained of the nearby Jewish settlements that frequently blocked access to the local villages, burned their farms and olive trees, and raised wild pigs that they released into Palestinian farms.

Just outside the fairly idyllic village of Deir Istiya, there is a valley called Wadi Qana, part of the food basket for the Salfit District. Surrounding Jewish settlers have dumped raw sewage into the valley, contaminating the water, driven families out of the region, dug reservoirs that dry up the natural springs, demolished orchards, uprooted trees, and released wild pigs into Palestinian farms where they eat the smaller vegetation and younger olive trees that were planted to replace the damage done by settlers.

These stories are obviously not so cute or heartwarming. Reports from the region dating back to 2012 indicate that wild pigs are indigenous to Palestine and there has been an explosion in the population due to a lack of predators and laws against shooting the pigs. There is rising damage to Palestinian crops (and not Israeli settlements) due to the policies and practices of the Israeli government. There have also been a number of articles in Vice, The Palestine Information Center, and Al Monitor that confirm that the settlers-releasing-pigs-story is not just urban lore, but fact.

Then we come to the myth that Haifa is a kumbaya model of co-existence in a fractured Israeli society. It is certainly lovely that there is a “liberal Arab renaissance in Haifa,” but the situation is much more complex than gay, tattooed Palestinians having the freedom to party in a bar of their choosing. Jihad Jaburaya, a Palestinian lawyer living in Haifa, explained to me the troubled history of Haifa. Before 1948, 70,000 Palestinians lived in the city and it was a major commercial center, attracting workers from all over the Arabic-speaking world. In the 1948 war, Israeli military forced the inhabitants to flee “into the sea,” many escaping to Lebanon, leaving 1,200 Palestinians to struggle within the newly formed state. When Palestinian properties were seized, they were put under Israeli governmental “companies” that collected rent from the former owners.

The Israelis declared empty Palestinian homes “absentee property” and herded the remnants of the city into a prison like ghetto called Wadi Al Nasnas. Wadi Al Nasnas became the center of Palestinian cultural life, including the home of the poet Mahmoud Darwish. The property seizures included the Islamic wafq which is supposedly protected under Islamic law for families to use. Many of the street names were changed to the names of rabbis or famous Jewish fighters and the remaining names were largely Palestinian collaborators.

In the neighborhood of El Hadar, we saw many traditional stone Arab houses. Jihad noted that it is against international law to sell or renovate properties from expelled people and that rent and sales from “State Property” rightfully belongs to the original owner. He also said that the Israeli government ignored rampant drug use for years and only stepped in when it started affecting Jewish citizens.

The Palestinian population of Haifa (40,000 in 2017) is now a city within a city. Most Jewish citizens live separately from their Palestinian “neighbors” through the forces of history, culture, economics, and unwritten policies including redlining. The schools are segregated, though Palestinian children are taught the usual Zionist curriculum devoid of Palestinian history. When Jihad bought a home in a nicer area, he said he was charged $15,000 more than a Jewish Israeli and when he moved into the upscale property, he was told that he was not allowed to speak to any of the future owners until the property was entirely sold. His Arabic would bring down property values and potentially ruin the neighborhood.

Clearly a city with this kind of traumatic, racist legacy cannot truly be a center of coexistence until there is a reckoning with the past, the full history with all its pain and destruction, and a movement towards recognition and reparations.

The hasbara industry does not want us talking about Haifa with this kind of clear eyed honest assessment of the past or the present. The hasbara industry also does not want us talking about settlers releasing wild pigs onto Palestinian farms, the racist response of the Israeli government towards its Palestinian citizens when it comes to COVID-19 education and vaccines and the neglect of East Jerusalemites, the vaccine apartheid policies toward Palestinians living under occupation. They don’t want us talking about the ever worsening humanitarian crisis in Gaza, Netanyahu’s indictment, the steady rightward shift of the Jewish Israeli public, Israeli attacks on Iranian ships in the Red Sea. The list goes on….

Wild boars nibbling flowers in Haifa is so much more fun. The New York Times should be ashamed.

Share this to:
previousUnder Israeli Apartheid, There Are Two Different Pandemics – February 28, 2021
nextThe Nakba Continues – May 14, 2021