Under Israeli Apartheid, There Are Two Different Pandemics – February 28, 2021 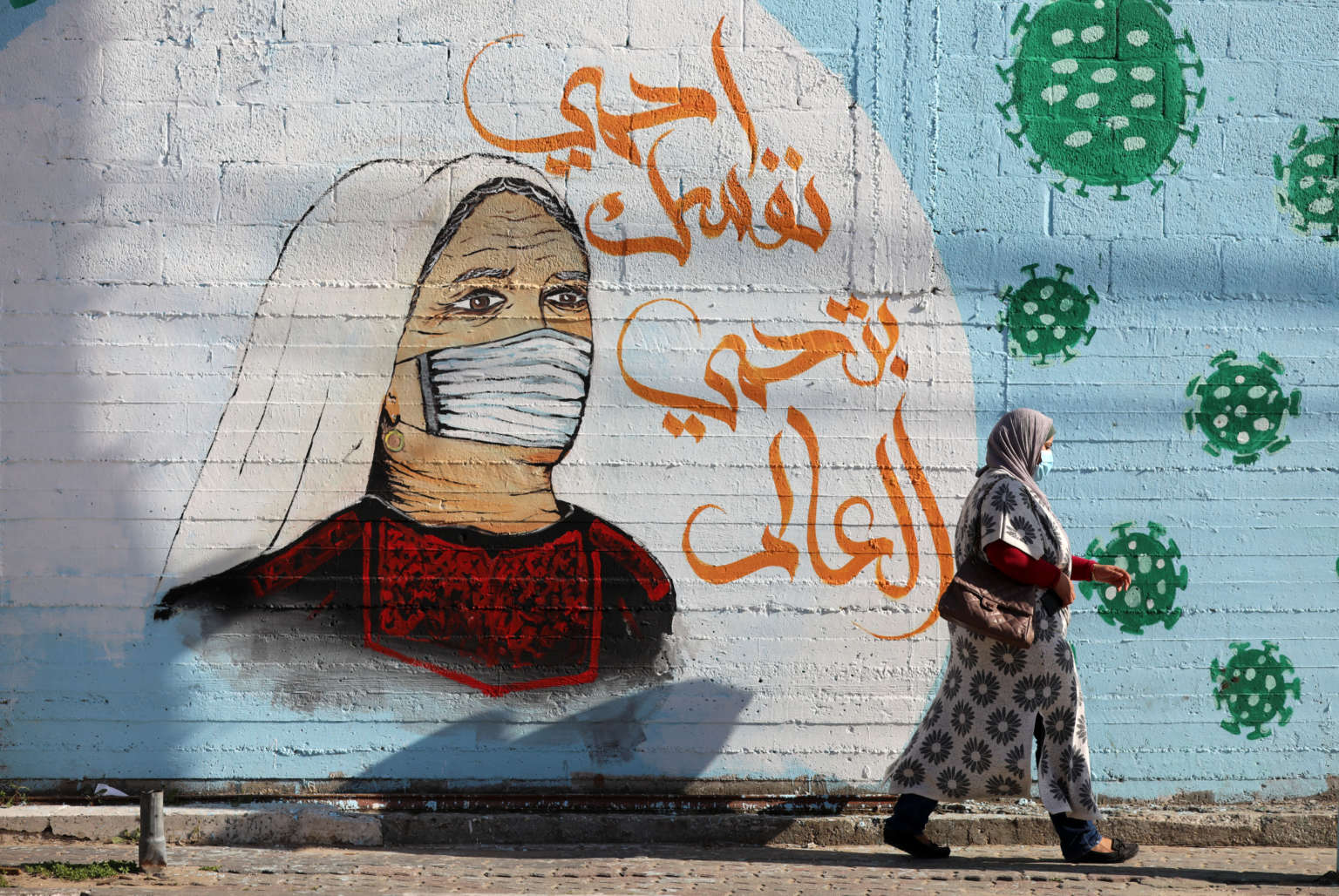 A Palestinian woman, wearing a protective mask amid the COVID-19 pandemic, walks past graffiti with a slogan in Arabic reading: “protect yourself and your family” in Gaza City, on February 27, 2021.
MAJDI FATHI / NURPHOTO VIA GETTY IMAGES

There is growing concern regarding the inequitable distribution of COVID-19 vaccine, nationally and internationally. As the rollout continues, some U.S. states are allocating more vaccines to health centers, local health providers and tribal programs, focusing on vulnerable and hard-to-reach populations, and paying attention to outreach to communities of color.

There is also serious discussion of a global approach, lifting patents for vaccines that were largely developed using governmental funding. The pandemic has revealed the glaring contradictions when both public health and medical care are allocated along racial, economic and geographic lines. Addressing these issues alerts us to the fact that when health care is treated as a privilege rather than a human right, individual and societal health suffer.

One of the most glaring contradictions during the pandemic is in Israel/Palestine, where approximately 5 million Palestinians living under a 53-year military occupation are being left behind. Israel, a developed country with top-notch health care facilities and universal health care access for its citizens through large health maintenance organizations, has been an example of a successful vaccination rollout, despite its challenges reaching Palestinian citizens and ultra-Orthodox Jews.
The vaccination rate among the Palestinian population is about half that of the Jewish population due to poor outreach, access and distrust, similar to the experiences of people of color in the U.S. Many ultra-Orthodox communities are highly resistant to vaccine campaigns. Nonetheless, almost half of the Israeli population has received a first vaccine dose and a third of all Israelis were fully vaccinated, as of February 22.

At the same time, realities are very different in the adjacent West Bank and Gaza Strip, where years of strict Israeli control over medical supplies, electricity and water; crushing policies of de-development; repeated attacks on medical facilities, water and sewer plants; and restrictions on population movement have left the health care systems in shambles. As of February 25, there have been 203,260 confirmed cases of coronavirus in the occupied territories with 2,216 deaths, although both numbers are major underestimations due to lack of testing capacity. In Israel, 764,791 cases have been reported with 5,669 deaths as of February 28.

The situation is most critical in Gaza, where the United Nations has repeatedly warned of the imminent collapse of the entire medical system. Increasingly typical is the experience of Asmaa Tayeh, operations manager for We Are Not Numbers. Twenty-five members of her extended family have tested positive, 15 became ill and three died.

“Ever since the reports of the virus surfaced in March 2020, we’ve been paranoid,” said Tayeh. “I was scared to death and ran to the market to fetch food so we could prepare to stay home for months. I’d yell at anyone who left the house. But since we didn’t know anyone who was infected, we started feeling a little safer. Then came November and December. More and more of our relatives were infected. On top of that was the fear that we wouldn’t get good medical care, since the Israeli occupation has crippled our health care system.”

It is not possible to do social distancing and adequate hand washing in one of the most crowded regions of the world where 95 percent of the water is polluted, electricity is available only eight hours a day, there are constant shortages of test kits, essential medications and sometimes even oxygen.

The Israeli government claims that under the Oslo Accords, they are not to be blamed. Israel wants Palestinians in the territories to have the responsibilities of sovereignty (providing health care) without the benefits of sovereignty (resources and control over the system). Experts also agree that international law as outlined in the Geneva Accords supersedes the Oslo Accords: The occupying power is obligated to provide “prophylactic and preventive measures to combat the spread of contagious diseases and epidemics” for the occupied population. Recently, in an egregious move, Israeli authorities temporarily blocked the import of COVID-19 vaccines into Gaza.

There has been an international outcry regarding these Israeli policies, which are being called a clear example of medical apartheid. Over 100 Palestinian nongovernmental organizations and human rights groups, Democratic members of the U.S. Congress, and Jewish organizations like J Street and Jewish Voice for Peace have called on Israel to be held accountable. Even “Saturday Night Live” has joined in. The Israeli government has responded by agreeing to vaccinate Palestinian prisoners and promised 5,000 vaccine doses for health care workers. This kind of “charity” falls far short of international obligations.

For Israelis themselves, this is an illegal, immoral and also extremely short-sighted policy. Thousands of Palestinians work in Israel and the Jewish settlements, or are imprisoned in Israeli jails, while hundreds of thousands of Jewish settlers live in the West Bank. Living with a largely unvaccinated population only puts Israeli citizens at risk for infection and dangerous new variants. Facing international pressure, including from the U.S., as of February 23, Israeli authorities have allowed several thousand doses into the West Bank and Gaza and have agreed to begin vaccinating Palestinian workers who cross into Israel.

In a controversial move, Israel announced that it will be providing vaccines for the Czech Republic, Honduras, Syria and other countries that it is wooing into its sphere of influence. This move has been called “vaccine diplomacy,” but is more honestly “vaccine washing,” in the same spirit as greenwashing and pinkwashing: an attempt to improve the image of Israel. After an outpouring of criticism, Defense Minister Benny Gantz announced that the program had been “frozen” for further clarification.

While the Trump administration was particularly catastrophic for Palestinians in the region, President Joe Biden has agreed to restore funding to the UN Relief and Works Agency for Palestine Refugees in the Near East, the World Health Organization (WHO) and a number of aid groups, and to communicate with Palestinian leadership. Nonetheless, Biden refuses to recognize that the region is long past a two-state solution, and that the struggle now is to challenge an apartheid state in which the Israeli government controls the land between the Mediterranean and the Green Line, as well as the lands occupied in 1967.

Jewish settlements continue to expand deep into the West Bank, with their associated military bases and bypass roads; the Jordan Valley is under total Israeli control; and the Palestinian Authority is faced with a truncated collection of bantustans. Gaza is totally isolated and facing a steady collapse of the health care system, the economy, water, sewer and electrical systems due to the Israeli siege. To successfully contain the COVID-19 pandemic, the occupation must end.

Palestinian authorities are negotiating doses of vaccine from Russia, Britain, WHO and an international consortium called COVAX, but it is unclear when the doses will arrive, how they will be distributed, paid for, and if any will reach the beleaguered Gaza Strip. How many more Gazans will get sick and how many more will die before that day comes?

Share this to:
previousLetters to Dr. Fauci from the Jewish Voice for Peace Health Advisory Council February 28 & April 9 2021
next‘NYT’ coverage of happy boars of Haifa is just another way to ignore settlers’ crimes – April 11, 2021