After the dare devil taxi ride through the streets of Gaza City, I am so pleased to return to the Aisha Association for Women and Child Protection and to meet once again with Reem Frainah and Mariam Abu al Atta. 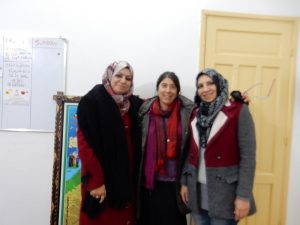 To give you a sense of the challenges, Reem begins by describing a group of 42 twelve and thirteen year old girls from Beit Lahiya in northern Gaza who have all dropped out of school. (FYI this area was severely destroyed in 2014 but no one mentions that.) Some girls did not have the money to buy school uniforms or backpacks, some were doing poorly academically, some had families which did not or could not support them emotionally or financially, and some were forced to get married.  There is a campaign to stop forced early marriages in Gaza. Aisha is providing psychosocial support, training the girls with vocational skills such as cosmetology and hair dressing, with the ultimate goal of returning them to complete their educations. 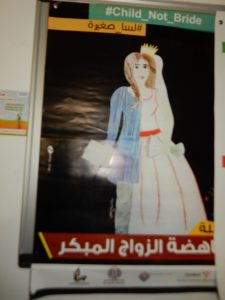 I am here to do a women’s health conference and soon ten women and one little girl are squeezed around a large black desk, a little uncomfortable, but definitely curious about this strange doctor from America. To protect their privacy, I will not identify anyone and some of their stories are blended. They range in age from 26 to 39 and come in various shapes and sizes and styles, all wearing long coats and hijabs. Very quickly we are awash in sisterly feeling and women are adding their stories, opinions, and advice, often all talking at once.

One lady from a refugee camp states that her mother died at 38 at Erez checkpoint while she was waiting for a permit for treatment in Israel which was denied.  The daughter discovered breast lumps several years ago, was told she had breast cancer but the lumps disappeared without treatment. Now the lumps are back, she has breast discharge, and is very worried.  She had a mammogram (difficult to get in Gaza and often of dubious quality) several years ago.  So we talk about cancer, (she says she was told they were “dead cells”), we all practice doing breast self-exams, and review appropriate medical evaluations for her symptoms.

Another woman with many children is having irregular bleeding and after an evaluation was given some pill to take for seven days and told by the doctor not to worry; “everything is okay.” During the conversation she admits that she is having problems with her husband and not sexually active. We talk work up, options, treatment, lots of questions are answered and everyone gets a basic anatomy lesson.

Then there is an overweight lady with what we call a “positive review of symptoms” which means that she has a long list of physical complaints and medical problems that include high pressure, eczema, and anemia as well as neck pain, back pain, fainting after seeing a snake, hand numbness, stomach pain, etc. I find out that she is afraid if she tries to lose weight her anemia will worsen. She is afraid to use topical steroids because (as everyone in the room agrees) that will make her gain weight (which is not true). Where to start? We talk a lot about life style, exercise, stress reduction, relaxation exercises, walking every day.  This seems to resonate with many of the other women as well. Privately I wonder where these ladies can find the time and space to exercise given the realities of war and culture.

A woman from Syria suffers from palpations and stress; her family still lives in Syria, her husband is unemployed, she has many children. We talk self-care and stress reduction.  Yoga seems to be popular. A soft spoken lady finds that her hands and feet are dry and cracking and her doctor told her she has eczema but the medicine she needs is not available in Gaza.  Her real problem is that her glasses broke, she cannot afford to replace them, and she wants to continue doing embroidery.

The most giggly moment comes when a divorced woman wants advice about a lump in her vagina.  This involves some unusually frank discussions, explicit drawings of the vulva to figure out exactly where this lump might be, and discussions of diagnosis and treatment.  Everyone is getting more relaxed, but it is also clear that when it comes to health, not only is stress an enormous contributor to disease, but there are serious issues around knowledge, money and the quality of care tends from my perspective to be fairly patriarchal and not of the highest quality.

Two hours later, I am left feeling utterly inadequate in the face of the massive challenges these women endure but relieved that they seem happy, with lots of thank you’s and warm handshakes and appreciation for the emotional power of women just working and sharing together.

Share this to:
previousTwo million survivors: We will not be trapped to be dehumanized- January 9, 2017
nextTrauma and shame: Women struggle for gender justice – January 9, 2017