Two million survivors: We will not be trapped to be dehumanized- January 9, 2017

The news on the street from Jerusalem: the accused killer of the Israeli soldiers was recently released from an Israeli prison (background: likely brutally arrested, tortured, farce of a trial, long sentence).  The Israeli authorities have decided not to return his body to his family for a proper burial, (likely inflaming the already traumatized, grief-stricken mother and father and brothers and sisters and cousins even more). And authorities plan to demolish his family home in a frenzy of collective rage and punishment that is a violation of international law and basic human rights. Not an excuse for what he has done, but a context in which it occurred and will undoubtedly occur again.

But I am safe in Gaza touring one of the three Gaza Community Mental Health Program (GCMHP) clinical centers that serves Gaza City and the north. The balding, sweet faced psychologist, Hassan Zeyada, is the chief spokesperson but we talk with other team members that include adult and child psychiatrists, nurses, occupational therapists, and pharmacists. The innovative therapeutic approach includes a bio-psychosocial model that is nested in the economic and political context in which the patient is existing. Besides the clinical work, the staff does outreach to kindergartens, teachers and parents, developing skills and attempting to identify children and families in need of further intervention. They have a school mediation program to reduce violence between students and a school counseling unit, and also work to improve the professional environment for school counselors. As you can imagine, children bring their war and family traumas and dysfunctions to the classroom so this is a critical diagnostic and potential treatment moment. Children needing more intervention are referred to the GCMHP center. 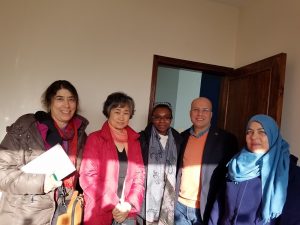 Because of the immense need and limited numbers of professional staff, the center offers practical training for students from the Islamic University studying psychology and medicine, who become grounded in the relationships between psychological and social issues. They also provide post graduate research projects and a two year diploma in community mental health. Their media activities focus on the critical link between human rights and mental health which was first enunciated by the GCMHP founder, Dr. Eyad el Seraj.  Thus part of the therapy emphasizes changing the community, but high levels of unemployment, the ongoing crushing siege, and severe travel restrictions are major obstacles when working with these survivors. Since 2015 the political context has been dominant although this has been true for many generations. But in the past ten years, there have been three devastating wars that came on the heels of occupation and siege. The biggest challenge now is dealing with two million survivors living on a tiny strip of land, with 53% less than 18 years of age.

Dr. Zeyada notes that after the first big offensive in 2008, life was very difficult with a highly traumatized population suffering massive amounts of PTSD.  After the second offensive, the new traumas stimulated relapses in symptoms that began in the first war. By 2014, this war was “the most terrible. We were traumatized. Everybody relapsed.  The last two years have been most difficult for ourselves and our clients, the biggest challenge is to continue to work with our patients and ourselves. Israel wants us to be an impotent population, so we must keep going. Without political change, we are not that effective. There is no sense that there will be an international intervention.” He notes, even in the West Bank there is clear evidence that children are arrested and tortured and incarcerated. “We are astonished by the international silence. The most powerful healing is to is to eliminate the reason” for the trauma, ie., to end the Israeli occupation.

The center works with other human rights organizations such as Mezan, Palestinian Center for Human Rights (PCHR), Gisha (the Israeli Legal Center for Freedom of Movement), Physicians for Human Rights Israel, Adalah, and Middle East/North Africa Human Rights Watch. Nonetheless, the level of helplessness is growing in Gaza and Gazans feel increasingly powerless and angry, abandoned by the international community, periodically treated as an emergency case rather than as a people in need of long term development. Because of the recurrent attacks, donors are only looking at short term projects, resulting in a loss of hope, stability, and security.

Uniquely, at the GCMHP, “mental health professionals can’t just have a restricted perspective. We look at the context of the mental disorder and we have to raise our voice on human rights.  It is clear Israel is the occupying force.  We need to end the occupation.”

I ask about the consequences of the dysfunctional roles of Fatah and Hamas and the lack of political unity and the response surprises me. “Fatah and Hamas will be, how can we manage? The occupation was the issue before the internal division which is a side issue.  The occupation is the main issue.  All of our resistance movements have been against the occupation, Hamas and Fatah are a diversion.” One psychologist notes the issues existed in 1967 and even go back to 1948.

(Just for a reality check, I am writing this blog at the charming Marna House – which has no heat on a chilly January afternoon – I have been wearing my coat almost 24/7 and the electricity just went off…now it is back, but no promises for the rest of the evening…you get the idea.)

Chung-Wha remarks that Grassroots International was founded in 1982 during the Israeli invasion of Lebanon. Other donor groups did not want to get involved, but the founder, Dan Connell, witnessed the injustices and decided to create an agency that would work with Palestinian refugees.  Now this philosophy extends all over the world to other indigenous peoples struggling with issues of land and water and human rights, working to build a global strategy and movement.

Dr. Zeyada remarks with a mix of defiance and dignity, “We still have our self-esteem. We have justice issues and to end the occupation.  We are not totally helpless.  BDS [boycott, divestment, and sanction] is a creative resistance. We will not be trapped to be dehumanized and we will not demonize the Israeli people. We keep and protect our humanity and we will not be trapped by Israeli policies. We have resilience after three offensives and a belief in the justice of our problem.  We all believe our problem is not just religious conflict, ISIS; it is a struggle for land and rights and this is legitimate.”

We tour the facility, starting with the telephone hot line room which provides help, counseling, and referrals, particularly for desperate Gazans who cannot reach the clinic. The center is working on improving their staff gender balance, hiring more women at all levels. Zahiyya Khalil is a psychologist and writer and the extraordinary director of the hot line which receives 25-30 calls per day.  Decades ago she came from a small village east of Khan Yunis in the south and says that 35 years ago girls were not allowed to attend school, but she wanted to change her life, defiantly studied psychology in Algeria, now has an active Facebook page and blog, and is the first female psychologist hired by GCMHP. 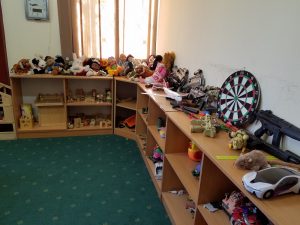 We explore a variety of conference and counseling rooms, the EEG room where organic causes of psychiatric disorders (conversion reactions versus epilepsy for instance) can be ruled out. There is a medical exam room, a pharmacy for psychotropic drugs that are offered free and imported to Gaza or donated by Washington Physicians for Social Responsibility in the US. The play therapy room is particularly fascinating as there are shelves of toys and stuffed animals, dolls, plastic figures, as well as shelves of plastic war planes, a large collection of various guns and other weapons, tanks, and soldiers.  The hope is that the child starts with the toys of war and by the end of therapy is playing with the animal puppets and Disney characters more suitable for childhood. There are also anatomically correct male and female dolls for children suffering from sexual child abuse. 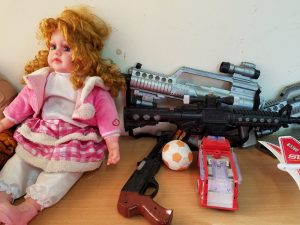 GCMHP is very well respected in the community, but still deals with the social stigma of mental illness. We end the tour with an exhibit of children’s’ art from the second and third assaults.  The drawings are the painful depictions of a child’s view of war and the collages include bloodied dolls, bombs with doll body parts off kilter or missing, and a pillow with exploding stuffing. 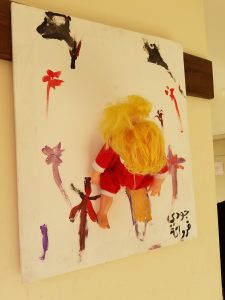 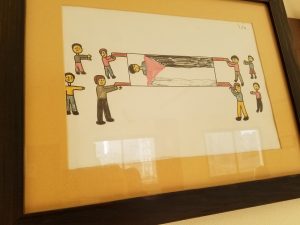 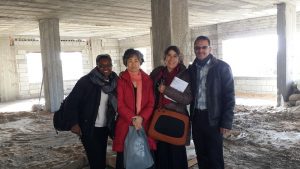 Dr Yasser Jamei, psychiatrist and executive director, is eager to show us the new building that is under construction and we are soon carefully treading through a six story cinder block structure filled with piles of sand, tiles, debris, building equipment and (to my amazement) the most precious commodity…. CEMENT. This $900,000 building project represents a commitment to the future of the center and the end of the financial drain of renting two large facilities. Acquiring cement is a major megillah (as we say) due to the Israeli list of restricted items and the reason why there has been so little rebuilding post war. GCMHP employed the same time-consuming bureaucratic mechanisms used by UNRWA and UNDP to get the appropriate permits.  Donations to this project go through the Islamic Development Bank which then distributes the carefully tracked money which buys the carefully tracked cement. The goal is to get the building partially completed (outside skeleton and first floor) so it can be clinically functional and then to gradually finish the rest of the floors to create a modern, first rate facility. They are hoping to raise enough to use solar panels. 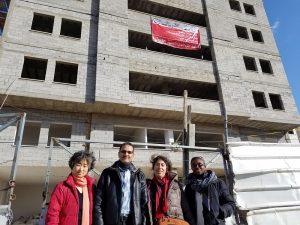 Dr Yasser notes that the experience and research at GCMHP has created a body of work that is universal: torture and trauma and human beings are ultimately the same everywhere. They have four standard intervention protocols that could easily be applied to the refugees in Syria, or any Arab country. This work goes beyond Gaza.

The work of the center and the building project is indeed daunting but I can see the excitement that is motivating Dr. Yasser as he gives us the virtual tour and hopes we do not tumble down the rough irregular concrete steps. From the open windows I can see the glorious Mediterranean, huge waves tumbling onto the shore, the sound track for a man with big dreams for a Gaza with a future of healthy