This is Alice Rothchild’s second dispatch from her trip to the Middle East. The first concerned a church devoted to refugees. 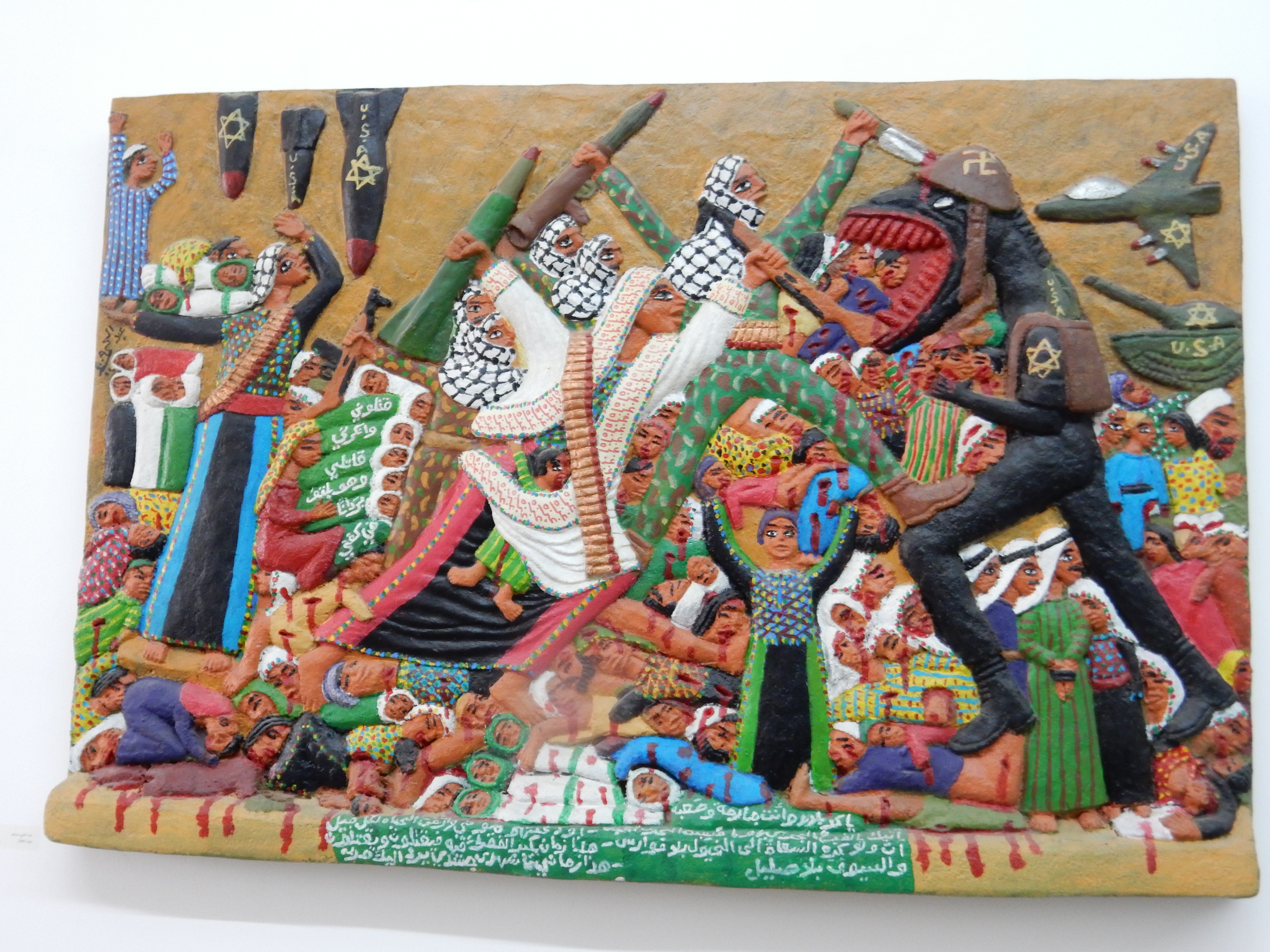 Leaving the Nazarene Church, I meet up with a reporter from the Electronic Intifada, Tamara Nassar, who is excited to inform me that this week is Israeli Apartheid Week, organized by the Jordanian BDS chapter. I learn that there is a general sentiment here that supports boycotting Israel and Israelis broadly rather than just complicit institutions. Tamara talks of another unaffiliated group focused on anti-normalization called Etharrak that recently was critical of Netflix for filming a new TV series using Amman as Tel Aviv. These activists denounced this effort as normalizing relations with Israel. As Tamara wrote in a piece for Electronic Intifada, two Jordanian actors pulled out of the show and there were protests at one of the film locations.

Etharrak condemned the filming in a letter to the Royal Film Commission of Jordan, an official body that promotes and facilitates foreign film and television production in the country.

Israel uses cultural normalization “to beautify and whitewash its crimes, terrorism and occupation,” the letter stated.

Activists have demanded answers from the film commission on the nature of the TV series and the authorization it received to film in Amman.

They also stated that the Royal Film Commission should not have approved a production without full knowledge of the content of the film, which could potentially support Israeli policies and a Zionist agenda. So much for Wadi ‘Araba, the peace treaty between Israel and Jordan.

I am beginning to get a glimpse into the complexity and tensions within Jordanian society. I hear that an estimated forty percent of Jordanians are of the 100% variety, (although I could not find an official statistic on this, I suspect because 100% is difficult to define) and the rest hail from Palestine, Iraq, Syria, Libya, Somalia, Sudan, and Yemen. Jordan has “the second highest share of refugees compared to its population in the world.” More than two million registered Palestinian refugees live in the country, but most (not all) have full citizenship. The wars in Syria and Iraq have produced new waves of refugees, an increase in security concerns, tremendous strains on public services, and an influx of low wage laborers. The booming Jordanian economy has slowed and the majority of the population is young and employable. Decent jobs are in increasingly short supply.

Despite the great highways and snazzy skyscrapers, Tamara (who grew up in Jordan) informs me that public schools in Jordan are terrible, that much of the infrastructure is in poor repair, and there have been protest marches demanding better employment. The government monitors protests, and beatings and arrests are common. Since the Arab Spring there have been arrests for Facebook posts, and twitter comments. With the recent cybercrime law, the government has loosened the terms in which citizens can be arrested for comments they make online. There is a general distrust of the government which tends to replace the prime minister periodically, hoping to appease the masses.

Tamara’s father is Palestinian from Ramle but her mother is Jordanian (100%) from Ajloun, but the family is unclear that it actually originates from there, if you go back over a century, (making these categories even more confusing than they already are). She explains that Palestinians from 1948 were able to obtain Jordanian citizenship as were those refugees who were living in the West Bank and fled in 1967. But those who fled from Gaza were not given citizenship. (It is actually even more complicated than that, if you are interested.) Palestinians now constitute approximately 60% of the Jordanian population. Citizenship is conferred through the father.

She thinks UNRWA is very present and important. It ensures the refugee status of Palestinians, which is necessary in order for Palestinians to be given their right of return and provides important social supports in the areas of health and education.

We head over to the Darat al-Funun museum in Jabal al-Luebdeh, created out of a complex of elegant old white stone houses with multiple level gardens, an orange tree loaded with fruit, and bursts of wild flowers and flowering rosemary. We view an extraordinary exhibit by Palestinian artist, Abdul Hay Mosallam. He creates vivid, brightly colored sculptural friezes that feel almost Mexican to me, freighted with Palestinian history, suffering, strength and symbolisms. There are writings on the pieces like:

“It is with honor that our bodies build a bridge, so tell our comrades to cross,” (written over a corpse being carried by a long line of people.)

“Where is Khaled, Omar Mujahid and Amer the leader of the Levant? Where is Salah Aldin to protect me, are there no remnants of bones for the companions?”

“They killed me and my killer denied me while turning cold in my grave.” The body has GAZA written all over it. The Israelis are pictured as green monsters with enormous teeth. 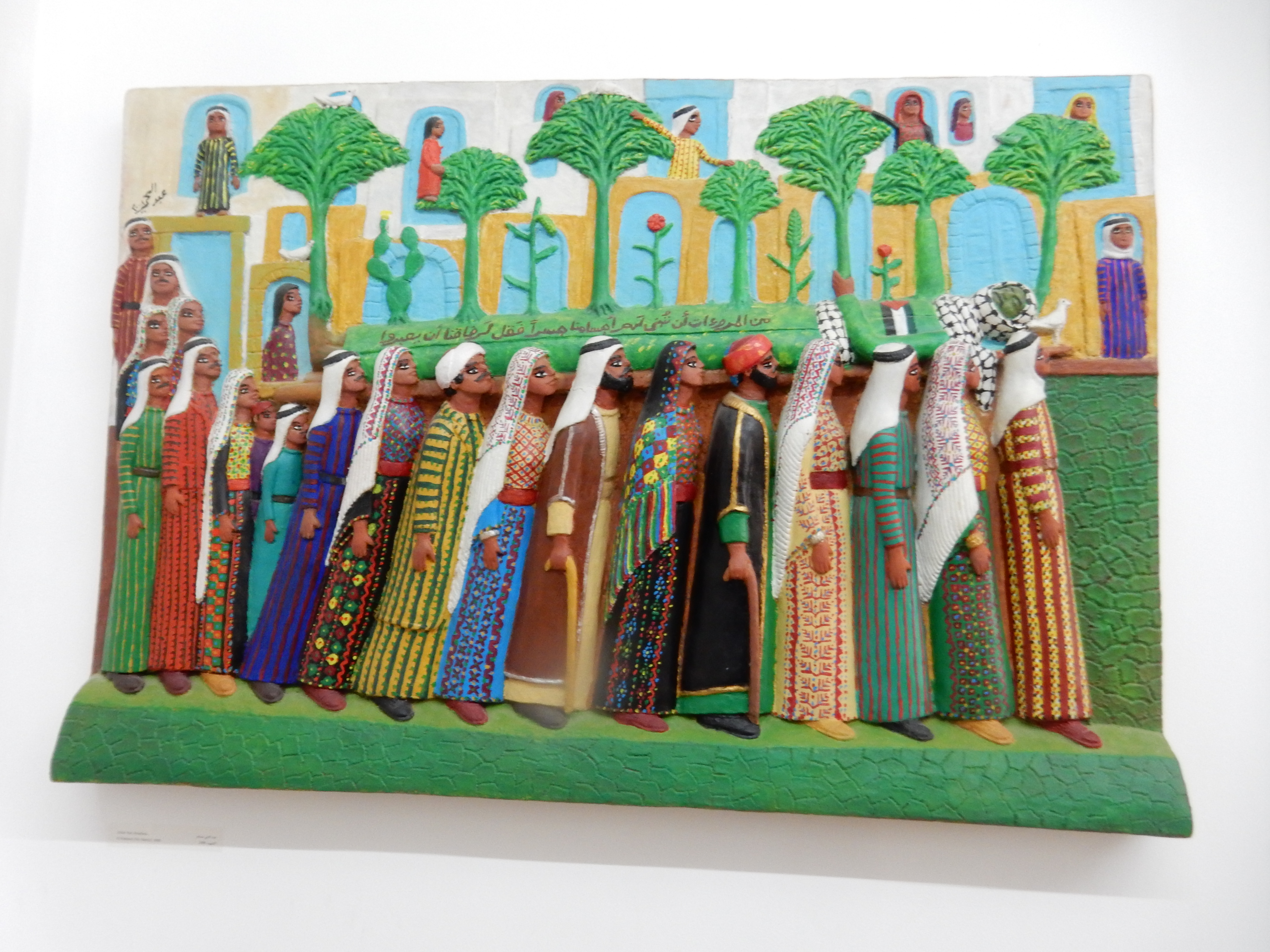 The imagery is extraordinary and the political message and pain is heart stopping.

We sip thick Turkish coffee overlooking a peachy sunset and learn of the recent protest focused against the building of a gas pipeline, part of the “Jordanian Campaign to Stop the Zionism Gas Deal.” Apparently the government owned electricity company, NEPCO, cut a pipe line deal with Israel to buy natural gas. The pipe line will stretch “from Jordan’s northern border with Israel to the Mafraq governorate in the northeast.” By 2020, gas extracted from the Leviathan fields in the Mediterranean off of Tel Aviv will be sent by pipeline across Jordan. The pipeline is being built by Jordan. Sixty percent of the fields are owned by three Israeli companies and 40% by the US company, Noble Energy, which is leading the extraction. Why am I not surprised?

There has been some resistance, companies refusing to participate in the construction, villages trying to stop construction on their properties. (Intersectionality anyone? Echoes of Standing Rock?) Israel is said to be making $8.4 billion on the deal. The irony is that Jordan could be a leader in renewable and solar energy. It is a very sunny place. But this is only the beginning. As Benjamin Netanyahu seeks economic cooperation with the Arab world as well as Europe, and Israeli, Egyptian, and American companies make their labyrinthian deals, Israel is working on a forum to create the Eastern Mediterranean Gas Forum. This market for natural gas will include Jordan, Italy, Cyprus, Greece and the Palestinian Authority and will be based in Egypt. Clearly the occupation is not a problem when it comes to multinational corporations and countries eager for energy.

Postscript, May 9, 2019: Abdul Hay Mosallam’s frieze depicts an Israeli incursion in Gaza with monster with a star of David on his arm, a swastika on a helmet and the word “U.S.A.” on his body as he attacks Palestinians. The imagery conjured references to anti-Semitic portrayals of Jews depicted as lizards, which some readers have noted and have understandably experienced the work as anti-Semitic. For me, this imagery speaks to the support and cooperation between the US and Israeli military, and how Palestinians view this behavior as horrifying as well as evoking behaviors that were characteristic of Nazis. Abdul Hay Mosallam is a renowned Palestinian artist living in Jordan and this was on display in a powerful exhibition of his work. I wanted to include this frieze in all of its pain, anguish, and complicated rage.