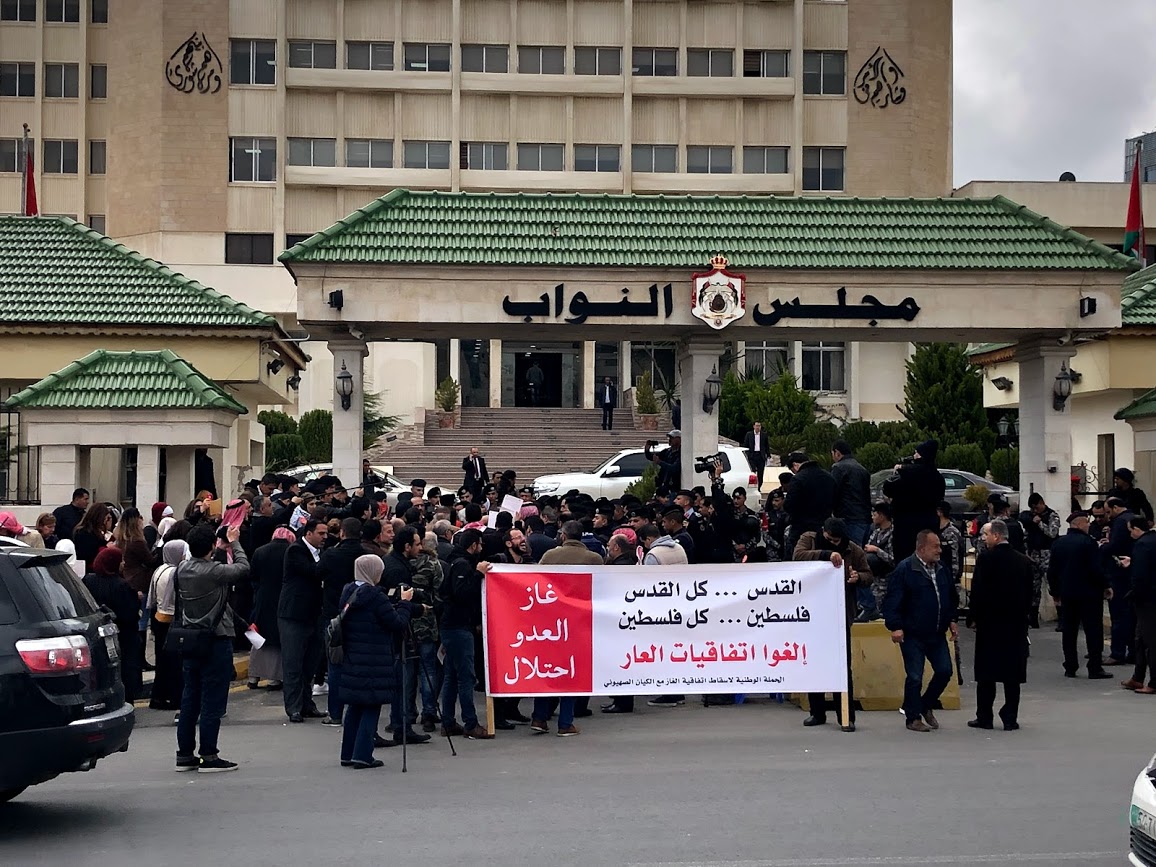 In late March and early April 2019 I traveled to Jordan and the West Bank (Palestine) with two colleagues, Sonia Dettman and S. Komarovsky, first to attend the Lancet Palestine Health Alliance conference in Amman and then to explore and better understand the lives of refugees and the workings of UNRWA, with a focus on the status of refugee health. This is the third in a series of reports.

I find traveling in a foreign country is a strange mix of exhilaration and confusion, a humbling struggle to understand and decode what I am seeing, along with a regular dose of bewildering frustration. Like the nightly ritual of searching for an adequate number of electrical outlets to recharge our assortment of computers, phones, and cameras. We managed to break two adapters in the sockets last night, leaving an exposed arm of the adapter sticking out ready to electrocute me when I get up in the middle of the night, disoriented, and try to remember, where am I now and where did they put the bathroom?

Today we learn that for the past few weeks, once a week people from distant municipalities have been marching to Amman’s city hall to demand better employment opportunities, increased wages, and better working conditions in the field of education. We come upon a demonstration outside of the Ministry of Education. We see a crowd of men, chanting, holding signs and flags, flanked by rows of police who appear armed with billy clubs. When a van of riot police pulls up and starts emptying into the street we decide it is time to leave.

As we head towards another demonstration against the gas pipeline, we pass by the Department of Justice where rows of mostly older men sit at folding tables under umbrellas with old fashioned manual typewriters, pecking with one finger. It seems that they write official letters of complaint and official documents. One elderly gentleman offers us tea and another insists we take a brochure about mosquito control. (You get the part about decoding and confusion.)

We walk around the block, past the ornately decorated blue domed King Abdullah I Mosque to the parliament, an imposing cream/white building with a green clay tile roof. A crowd of about 50 mostly men of a variety of ages walks to the entry gate, chanting, demanding to be let into the session where the pipe line is being discussed and protesting the gas deal in general. Two lawmakers speak in support of the protesters, another suggests that lawmakers were not given the opportunity to read the deal and it is unconstitutional and part of a highly problematic relationship with Israel. “‘We are calling for the Wadi Araba agreement to be dropped [the 1994 agreement that normalized relations between Israel and Jordan]. What is peace when they’re attacking Gaza?’ [MP Saddah] al-Habashneh said. ‘And with yesterday’s recognition of the Golan Heights, what’s left? We want dignity.’”

Police move in at protest at Jordanian parliament. Photo by S. Komarovsky.

We watch more than 25 police in blue (men and women) and riot police in camouflage, with billy clubs and bullet proof vests. The police women wear their police caps perched on top of their hijabs. One guy at the gate has an automatic weapon. It looks like the security forces are armed with tear gas and pepper spray, with big black helmets clipped to their shoulders. Press mill about with cameras and the protesters hold a large poster: “Jordan is not for sale.” There is one poster of a boy and a teenager. We are told that this boy went to visit the West Bank and was arrested at 16, convicted of throwing stones, and sentenced to 15 years in an Israeli jail. His father is often seen at protests with his son’s photos. There is a lot of coming and going, parliamentarians in long robes over their clothes. Protesters chant, holding red signs and wearing large red buttons, saying the pipeline deal is “shameful.”

We hear that aggressive police tactics are common so we watch the police and the crowd carefully. The riot police stand in a row about the gate; some mingle into the crowd, and gradually nudge the demonstrators away from the gate onto the sidewalk. The demonstrators comply and are soon surrounded by a phalanx of police on two sides, and the wall surrounding the parliament on the third. The only escape is down the sidewalk, away from the entry. I see one press guy greet and kiss a soldier and I am told that the security mostly doesn’t disagree with the protesters, but each has to defend a different position politically.

Demonstrators hold red signs translated as: “The gas of our enemy [Israel] is occupation.” Or: “Importing enemy gas is occupation.” Apparently ten of 130 parliamentarians agree with this sentiment. The actual debate is being live-streamed, although no protesters are allowed in the chamber. While the deal has already passed and the pipe line is under construction, parliament has to discuss and reaffirm it. Apparently it would be a huge embarrassment if the pipeline is not rubber stamped as it is supported by the king. The crowd chants, “This is not just a pipeline.” “We want everything – end the pipeline.” “We are supporting war in Gaza.” Jordan’s national electricity company NEPCO has signed an agreement worth $15 billion to buy natural gas from Israel over the next 15 years. The amount represents one quarter of Jordan’s debt. The environmental impact is not discussed much, mostly the cost and lack of need. Jordan is well suited for developing solar energy.

An agitated elderly man with a thick white beard and hoarse voice, wearing a traditional keffiyeh, yells poetry from a grassy knoll. One protester says, “We are here to make noise.” Decoding and confusion.

As the crowd thins out, we head back to the first demonstration where the protesters are still chanting, surrounded by riot police in camouflage and regular police. I am told that wasta (favoritism or nepotism), bribery, and graft are prevalent in Jordan. You get places, it seems, often because of who you know. For me, that lends an element of skepticism and outright cynicism to the efforts of the protesters earnestly fighting an obvious injustice. 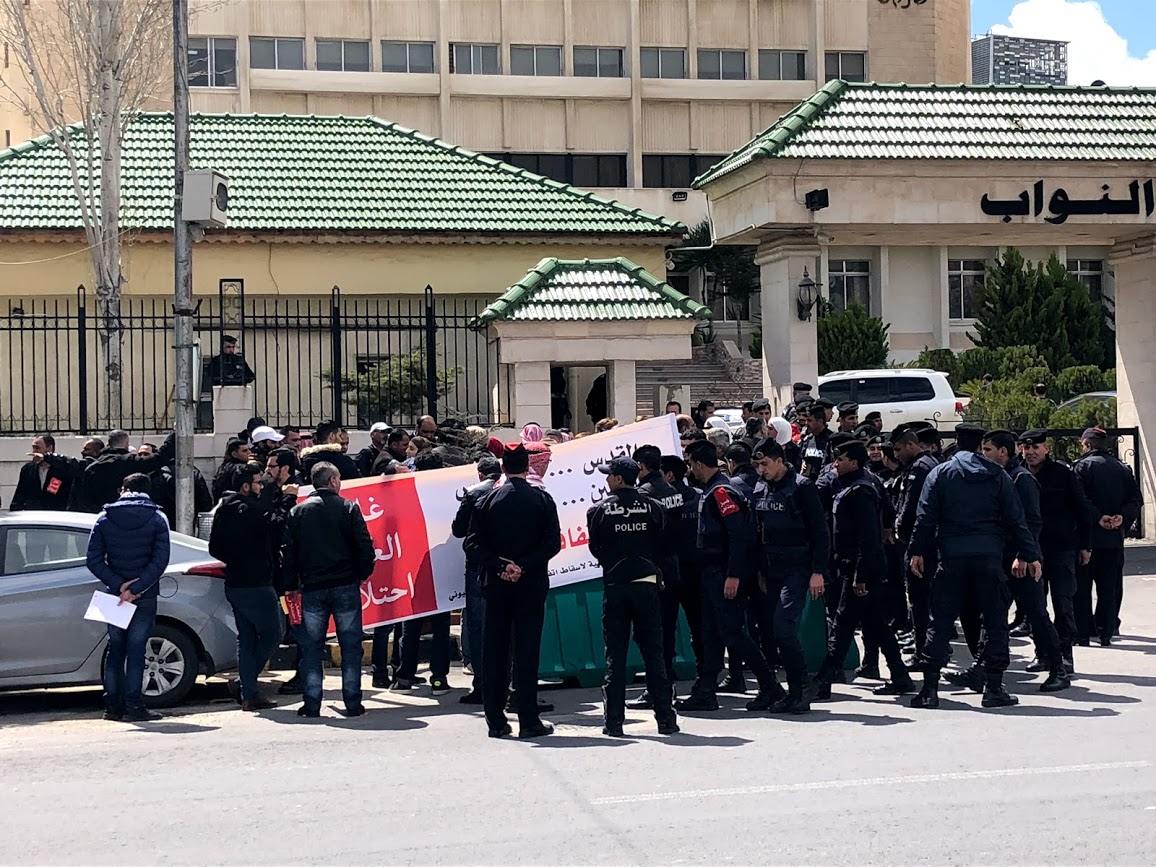 Share this to:
previousFrom God to art to politics, in Amman – April 28, 2019
nextFor Iraqi refugees in Amman, kindness, support and an application to Australia – May 9, 2019